Is the medical match fair? 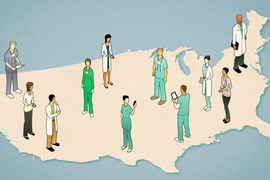 When medical-school graduates apply for their residencies, they use a centralized clearinghouse that matches applicants with jobs. This system has sometimes been challenged, such as in a lawsuit several years ago that claimed salaries of residents were reduced by this centralized matching method.

But a forthcoming study by an MIT economist indicates that demand for a limited number of desirable residency positions can keep salaries low — and introduces a new way of assessing that demand despite incomplete data that has previously restricted analysis of the issue.

“Salaries will likely remain low unless residency programs can increase the number of positions,” says Nikhil Agarwal, an assistant professor of economics at MIT, and author of the paper on the subject.

On average, Agarwal’s study finds, salaries of medical residents are lowered by an average of $23,000 due to the demand for slots. As the study puts it, residents are willing to accept an “implicit tuition” in their wages in return for experience and prestige. In the long run, residencies may be a worthwhile tradeoff for doctors establishing themselves in the profession, even with seemingly reduced wages.

Agarwal’s paper, to be published in the American Economic Review, is based on data from 2003 to 2011 gathered by the National Graduate Medical Education census.

The central clearinghouse — the National Residency Matching Program (NRMP) — matches about 25,000 medical residents annually. Incoming residents rank the positions they would most like to have, and an algorithm matches these choices with the ranked preferences of the medical programs.

A 2002 lawsuit asserted that the residents have limited bargaining power because they are assigned to positions and cannot receive multiple job offers, unfairly lowering their compensation. That suit was eventually dismissed in 2004, a few months after Congress passed an antitrust exemption for the NRMP system.

But that resolution of the lawsuit did not resolve the question of whether or not the clearinghouse does affect residency salaries. As of 2010, residents had a mean salary of about $47,000, compared to $86,000 for physician assistants, who do comparable work. Medical residents also have notably long workweeks and shifts, which themselves are the subject of intermittent public debate.

Agarwal’s study finds a new way of analyzing the compensation issue in the face of limited information. He did not have access to the ranked lists of jobs that applicants submit to the NRMP, nor to the lists of preferred candidates that medical programs submit. Even so, Agarwal was able to study the matched pairs of residents and positions, along with some additional descriptive data, such as geographic location, and determine demand on that basis.

The key to the analysis, Agarwal says, is “the fact that there are multiple residents in the same program. That tells you a lot about the residency program’s preferences for residents. Once you figure out that side of the market, you’re in business.”

For instance, Agarwal adds, “If a program [decides] to hire residents from [highly ranked] medical schools with similar licensing-exam test scores, then everybody it’s matched with will be similar on those characteristics. But if it doesn’t care about prestige of the medical school as much, there might be people from all kinds of medical schools, but their licensing-exam scores will be similar.” Partly by building a picture of those preferences and measuring it against the characteristics of the class of applicants, it is possible to estimate how many qualified applicants are available for residency positions.

An underlying implication of Agarwal’s conclusions is that the idea of a perfectly competitive, uniform market driving salaries does not ultimately hold up to scrutiny when it comes to medical residencies. There appear to be clumps of jobs considered particularly desirable, leading to uneven relationships between supply and demand within the overall residency job market.

“In [my] theory, you get a situation where people are not indifferent” in terms of job preferences, Agarwal notes.

For his part, Agarwal, who focuses on the growing field of market design, believes this method of determining preferences can be applied to other domains as well.  He is continuing to do research in the area of school choice, among other topics.

Prof. Nikhil Agarwal has found that a lack of positions at prestigious institutions leads to low salaries among medical residents, reports Angela Chen for The Wall Street Journal. Agarwal found that, "applicants are willing to pay an 'implicit tuition'...to have a prestigious and high-demand residency."

In an article for MedPage Today, Shara Yurkiewicz writes about a new MIT study showing that high demand for desirable medical residencies keeps salaries low. Prof. Nikhil Agarwal explains that, “even if salary negotiation was allowed, the salaries of medical residents would be quite low compared with physician assistants or nurse practitioners.”

Forbes has released its annual “30 Under 30” section, which highlights game changers under the age of 30 from a wide variety of disciplines. This year’s list features a number of MIT students, alumni and research staff, as well as Professor Nikhil Agarwal.

Doctor, doctor: Why the job market for married couples in medicine works well