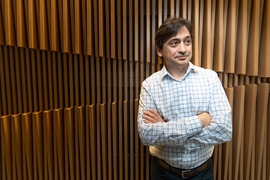 ↓ Download Image
Caption: “Teaching is complementary with research,” says economics professor Alberto Abadie. “When you need to explain material that you believe you understand very well, that is when the real test is."
Credits: Photo: Bryce Vickmark

Caption:
“Teaching is complementary with research,” says economics professor Alberto Abadie. “When you need to explain material that you believe you understand very well, that is when the real test is."
Credits:
Photo: Bryce Vickmark

Back in 1988, voters in California passed Proposition 99, a measure that raised cigarette taxes and placed other restrictions on cigarette sales. Has the law worked? To answer that, it would be good to examine an identical state where no such law was enacted, and compare it with California.

But as Californians know, there is no other place exactly like it. For social scientists, this is a problem. Rigorous studies often employ a test group and a control group, to see the effects of a change among otherwise similar sets of people. In this case, the control group is missing.

Alberto Abadie has a solution to this problem. It’s on display as he opens his laptop and shows some data to a visitor in his office in MIT’s Department of Economics. Abadie’s fix is what he calls the “synthetic control method,” which involves constructing an aggregation of demographically similar people from elsewhere, to serve as a kind of statistical control group — a composite non-California.

As Abadie explains, looking over the charts popping up on his laptop, he and two co-authors found, in a published study, that cigarette sales dropped markedly in California due to Proposition 99, with people annually consuming 26 fewer packs per capita by the year 2000.

The finding characterizes Abadie’s approach to research. He is an econometrician, someone who works to refine the tools and statistical methods of the discipline. But he is not just a mechanic of method; Abadie also researches concrete answers to policy questions.

“I do methodological work, but most of it is to estimate the effect of policy interventions,” says Abadie. “I try to use data to figure out which interventions have worked well.” Having long established his reputation in the field, Abadie joined the MIT faculty in 2016 as a full professor.

Abadie has traveled a long road to reach MIT as a professor. He grew up in Bilbao, Spain, where he was a good student with an interest in both physics and economics.

After receiving his undergraduate degree from the University of the Basque Country, Abadie received a master’s degree in Madrid, and then moved to MIT in 1995 as a doctoral student.

“MIT was this mythical place in my mind where all the most exciting knowledge came from,” Abadie says. As a PhD candidate, he worked with Josh Angrist and Whitney Newey, who are still faculty members at MIT — “my advisors, now my colleagues,” Abadie notes. Angrist has conducted numerous influential studies that refine the methods of research while producing policy evaluations, and Newey is a prominent econometrician.

Abadie joined the faculty at the Harvard Kennedy School directly after receiving his MIT PhD, and started producing some of his own influential work. The synthetic control method made its published debut in 2003, in a study of the economic consequences of terrorism (a subject Abadie has returned to multiple times). He has also published numerous papers more strictly devoted to refining statistical methods, and continues to do work along both avenues of research.

Since rejoining MIT in 2016, Abadie has continued with his scholarship while teaching both undergraduate and graduate courses, hoping to give today’s students the same benefits he once got from the Institute.

“Teaching is complementary with research,” Abadie says. “When you need to explain material that you believe you understand very well, that is when the real test is. Teaching enriches my understanding of my own research and the research of others, and new research questions often originate in the process of explaining what we know already.”

In addition to his post in the MIT Department of Economics, Abadie is associate director of MIT’s Institute for Data, Systems, and Society (IDSS), an interdisciplinary center launched in 2015 that blends data science and information studies with the social sciences. The IDSS has inaugurated a new undergraduate minor and a new doctoral program, among other programs of study, while serving to advance research across fields.

“I’m learning a lot,” Abadie says of his involvement with IDSS. “This is something new to me. It is very nice to see how they [data scientists and others] are interested in many of the issues we’re interested in. Many fields are colliding and overlapping now.”

And as far as the value that he has provided to scholars in other fields, Abadie closes on a self-effacing note: “Probably I am managing to do something semi-right.”

New faculty in the School of Humanities, Arts, and Social Sciences

How data can help change the world