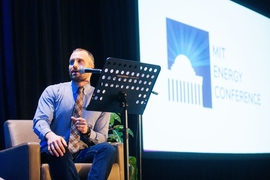 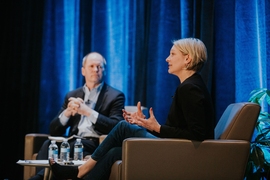 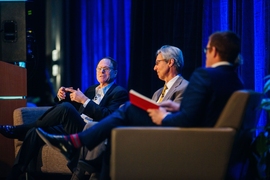 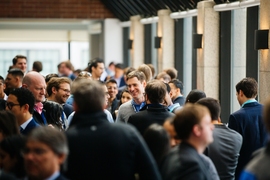 The 14th annual student-run MIT Energy Conference, the nation’s largest such event, reflected an increasing maturity in the low-carbon and zero-carbon energy field. A global push toward carbon-free energy, many speakers made clear at the event, held April 4 and 5 in Cambridge’s Kendall Square, is now seen as a given; questions now center on how to make it happen more quickly, fairly, and universally.

While previous conferences emphasized promoting a rise in the use of renewable energy, the keynote speakers, panel discussions, and exhibitors at this year’s event increasingly focused on the details of policy proposals, ways of funding promising new startup ventures, and how the electric grid can be adapted to handle an ever-increasing proportion of small and intermittent power sources.

A new theme this year was the increasingly significant role seen for proposed fusion power plants, which for many years have been considered too futuristic and too uncertain to play a meaningful part in decarbonizing energy production. But several new, privately funded ventures are working on fast-track versions that are seen as far more realistic and feasible than previous efforts. Two of these companies were featured in the conference’s two opening talks.

Chris Mowry, CEO of General Fusion, laid out the urgent need for scalable, carbon-free power generation, and explained his company’s unusual approach to a fusion reactor, which relies on pistons surrounding a sphere containing molten metal that gets pushed inward, generating the high temperatures and pressures needed to produce fusion in a tiny pellet of fuel at the device’s center. “Fusion is the most powerful energy source in the universe, the ultimate clean tech,” Mowry said. And unlike wind, solar, or hydropower, fusion energy potentially is unaffected by geographical constraints or weather patterns, and could be sited anywhere. And its fuel, derived from ordinary water, is readily available.

Bob Mumgaard, CEO of Commonwealth Fusion Systems (CFS), a startup company launched in collaboration with MIT to develop an advanced tokamak (donut-shaped) fusion reactor using high-temperature superconducting magnets, described that company’s approach, which unlike many others is based on principles that have been well-established through decades of fusion research at MIT and elsewhere. “It’s an exciting time,” Mumgaard said. “There is a nascent fusion industry, an ecosystem, in this field, like what we saw with solar several years ago.” The various companies have already formed a fusion industry association, which will help to drive the industry forward.

The CFS design, being worked on through research efforts with MIT’s Plasma Science and Fusion Center, is now the largest research project at MIT, Mumgaard said, attesting to how seriously this field is now being taken. If successful, it could transform the world’s energy mix, potentially providing a significant fraction of the planet’s energy needs by this century’s end, he said.

Meanwhile, the solar and wind technologies that were struggling to find their place in the energy mix a decade ago have now become, in most places, the cheapest alternative for new power generation, beating out coal-fired plants even without considering subsidies for renewables or penalties for pollution-producing fossil plants. Now, new business models for spurring the further growth of these renewables have become a major focus.

For example, Audrey Lee, vice president of grid services at Sunrun, explained how her company is focusing on selling solar power as a service, rather than as something the customer has to buy. The company will install solar panels and a battery backup system on a customer’s house, and sell the power to the customer at a discounted price. Meanwhile, all such installations in an area function as a sort of minigrid, in which excess power from one house can be used by other houses in the area, creating what she calls a “virtual power plant” and dynamically sharing the resource.

Overall, the conference speakers were optimistic about the potential for deep reductions in carbon emissions, at least in terms of the technology and economics. Political and social factors may be harder to predict, but renewable energy systems exist or are in development that could meet the need for carbon-free power. In a live taping of “The Energy Gang” podcast held at the conference, podcast regular Katherine Hamilton, a former utility executive and regulator, said that “it’s pretty easy to get to 75 percent renewables by 2040” in electricity production worldwide. “I don’t see any barriers, and everybody wants it.”

John Farrell, director of the Energy Democracy Initiative at the Institute for Local Self-Reliance, said that while much emphasis has been put on large, grid-scale solar installations, “solar can be competitive at any scale.” And with renewable energy’s rapid growth in general, “everybody is going to win from decarbonization,” because it has benefits both to the individual consumer as well as globally by reducing pollution and greenhouse gases.

One of the key needs to enable greater penetration of renewable energy sources is an inexpensive and reliable way of storing the energy from intermittent sources, several speakers emphasized. Even battery or other systems that could supply a four-hour backup could make a big difference in reducing pollution, because that could eliminate the need for many fossil-fuel-powered peaking generators that are only used during periods of peak demand, typically on hot summer afternoons and early evenings. A system that could extend solar power generated at midday to be useful during these peak hours could drastically cut the need for such peaking generators, said Ravi Manghani, director of energy storage for Wood Mackenzie Power and Renewables.

Yet-Ming Chiang, the Kyocera Professor of Materials Science and Engineering at MIT and founder of several startup battery companies, explained how his company Form Energy is working to develop extremely low-cost, long-lasting batteries that could meet this kind of utility-scale storage need. He envisions large installations that would be very different from the way people think of batteries today. “It’s not something that would be manufactured and shipped,” like conventional batteries, “but more like a chemical plant,” a fixed facility with large tanks and pumps.

Greater investment in the new technologies will be necessary to take carbon-free energy the next step toward dominating the energy mix. In a keynote talk, Brian Deese, global head of sustainable investing at BlackRock, asked “what will it take to move the really big capital, the trillions of dollars, into carbon-free energy?” One thing that’s needed, he said, is more funding for the kinds of big trials that can help to prove the feasibility of a technology and “de-risk” it for investors.

Sectors such as the utility companies, municipalities, and commercial mortgage-backed securities could invest significant funds into research and development in the energy field, Deese suggested. Those three sectors have about $5 trillion among them to invest, so even if a very small fraction of that went into such research, it could have a dramatic impact, he said.

This year, for the first time, the MIT Energy Conference also incorporated the final round of MIT’s Clean Energy Prize, in which a student-led team can win up to $100,000 toward their energy startup venture. Four teams competed in the final round, including one called Reeddi, started by two students from Nigeria, which aims to provide rechargeable batteries in rural areas in Africa where grid power is either nonexistent or unreliable. Another team, Medley Thermal, proposes a way to produce steam for heating or industrial processes in a more efficient way, potentially shaving off 25 percent or more of the energy needed for such steam production. And Sun Co. Tracking aims to develop a passive system for solar panel tracking, to enable new or existing solar installations to capture more energy for a given area.

The grand prize of $100,000 went to a team called Aeroshield, led by MIT graduate student Elise Strobach, who developed a new kind of transparent, lightweight material to be sandwiched between glass panes, producing a window that is 50 percent more insulating than conventional double-pane windows and lasts five to 10 years longer, but can be manufactured at low cost on existing production lines with only minor changes. “$20 billion a year goes out through windows” in the form of wasted heat, she said — an amount of wasted energy that is “enough to power half the country.”