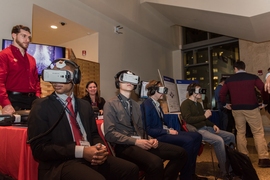 ↓ Download Image
Caption: At the Friday evening “Energy Showcase,” participants tried out a virtual reality demonstration put on by Shell, one of the conference sponsors. 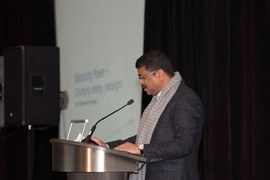 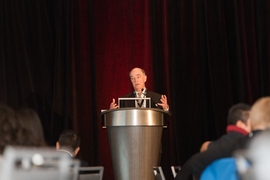 Caption:
At the Friday evening “Energy Showcase,” participants tried out a virtual reality demonstration put on by Shell, one of the conference sponsors.
Credits:
Courtesy of the MIT Energy Conference

One of the key technologies needed to transform world energy supplies away from fossil fuels and toward clean, renewable sources is a cheap and reliable way of storing and releasing energy. That will enable intermittent supplies such as solar and wind power, with their variable and often unpredictable outputs, to store energy that’s produced when it’s not needed and to release it when it’s needed most (or can be sold for the best price).

That was a message that came up repeatedly over the two days of talks and panel discussions at the 12th annual MIT Energy Conference, held on March 3 and 4. But while better, cheaper storage is essential, implementing it faces technical, economic, and policy challenges, several speakers noted.

Massachusetts, home to a number of leading startup ventures in the energy storage area, has “a huge opportunity to be a leader” in this burgeoning industry, said Judith Judson, the commissioner of the Massachusetts Department of Energy Resources, in one of the conference’s panel discussions. The state is already home to a number of companies working on innovative battery technologies, several of which are based on research from MIT labs.

But getting such technologies out into the world is more than just a matter of building a better mousetrap. For one thing, “the role of the utilities to push on this technology is so important,” said Belen Linares, the global research and development director for Spain-based energy company Acciona. “It’s collaborations between schools and industry that are going to give these technologies the real boost they need.”

Ravi Manghani, energy storage director for GTM Research, a solar-market analysis firm, who moderated that panel, concluded that what researchers really need to do now is “work on making energy storage less complicated and more boring.” It needs to be the kind of simple technology that can be purchased and then forgotten, he suggested, somewhat like a home water heater.

One promising new entry in that sector is Ambri, a company developing grid-scale batteries based on all-liquid active components, a technology developed at MIT in the lab of Donald Sadoway, the John F. Elliott Professor in Materials Science and Engineering. Dana Guernsey, Ambri’s director of corporate development, said that “one of the exciting reasons to be in this industry” is the potential to open up electrification “in places where there is no grid at all. Storage systems will electrify parts of the world that have been dark,” by enabling the construction of small, localized “microgrids” that can serve villages, schools, or small businesses.

Consumers can help to bring about that transformation, a number of speakers said. A panel discussion on “the engaged ratepayer” made it clear that utilities are becoming ever more responsive to the needs and wants of their customers, as the business has become more competitive. “The rate of change now in the industry is extraordinary,” said Terry Sobolewski, the chief customer officer of the utility company National Grid. “And it’s almost entirely driven by customers.”

In fact, the customer-centric orientation of the companies is now so strong that the formerly universal term “ratepayer” has now been officially discontinued by most of these companies because it implies a one-way relationship, and the companies now really want to stress their responsiveness and engagement, Sobolewski said.

Part of that responsiveness includes working with business and industrial customers. “More and more industries are asking for help,” he said, “on ‘how do I integrate renewables into my business?’” The change in attitude, he said, suggests that “we are on the precipice of this transformation.”

Southern California Edison is making inroads in this area, said Andre Ramirez, a principal advisor to the company. Its 5 million customers, he said, are all now on a “time-of-use” rate system, by default. That kind of rate system allows customers to shift energy-intensive activities, such as running a clothes dryer or charging an electric car, to off-peak periods when the rates may be much lower. Such shifting, if done on a large scale, can greatly reduce the utility’s need to build expensive peak-power generators to handle those loads. “We’re at the leading edge of that change,” Ramirez said.

The kind of detailed information that can be gathered over time about residential use can lead to specific, targeted suggestions for energy improvements for a given home or business. But information can also influence other kinds of decisions. For example, “millennials want to work for companies that have a conscience,” including what their energy strategies are and what their values are, said Tim Healy, CEO and chairman of the energy data analysis and management company EnerNOC. Transparency about a company’s business practices, including the details of its actual energy production sources, can be an important part of that, he said.

As for the energy systems themselves, innovations in the regulatory system that establishes rates and governs the interactions among power producers, distribution networks, and end-users are a major need at this point. “Regulatory affairs is where the innovation needs to occur,” Healy said.

MIT’s Energy Conference is organized annually under the auspices of the MIT Energy Club, which with its 5,000 members, including students, faculty, staff, and alumni, is “the largest energy club anywhere,” said Robert Armstrong, director of the MIT Energy Initiative, in his opening remarks at this year’s event.