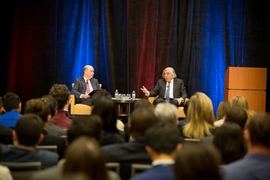 “Everything is tied to energy systems,” said Kandeh Yumkella, former U.N. undersecretary general for sustainable energy for all, in a keynote address Saturday at the annual MIT Energy Conference. For the estimated billion and a half people worldwide who lack access to reliable electricity supplies, he said, gaining such access can be key to improving education, communications, air quality, and economic progress.

“We must make small and big work together,” he said, in developing new energy distribution systems for the places that lack them – echoing the theme of this year’s 11th annual conference, Big Meets Small. “Unfortunately, for the political establishment, big is more attractive,” he said. For example, massive hydropower projects can be showcases for a nation’s leaders to show dramatic progress, but small-scale microgrid projects may reach many more people much sooner.

Yumkella described his efforts over the last few years to make sure that access to energy was included in the latest set of Development Goals for alleviating poverty, which were adopted by the United Nations in Sept. 2015. While the UN’s earlier Millennium Development Goals had not even mentioned energy, he said, the new list includes “affordable and clean energy” as the seventh in its list of 17 goals. It calls for universal access to clean energy by 2030.

And, Yumkella stressed, energy sources must be not only clean and affordable, but also sustainable — a criterion he was also able to get included in the UN’s goals. And part of making energy development sustainable, he said, was ensuring that it could be carried out in the form of profit-making businesses, not just charities.

He pointed out that while half of the world’s new discoveries of oil and gas reserves are in Africa, most of that is being exported. Even the scale of direct waste is staggering: The methane gas flared away uselessly at oil wells in Nigeria over the last 50 years, he pointed out, would have been enough to meet half of that country’s electricity needs.

One of the most important needs — also stressed by many other speakers at the two-day conference, which is the largest student-run energy conference in the country — is for affordable and durable storage systems. “With good storage systems, people could produce their own energy and store it,” Yumkella said, using intermittent sources including solar panels and windmills.

A panel discussion on Saturday specifically addressed that issue, featuring four speakers who are working on everything from proof-of-concept research, to commercialization, to financing and deployment. “I believe the biggest technical obstacle” to widespread deployment of renewable energy “is the intermittency,” said Michael Aziz, a professor of materials and energy technologies at Harvard University. “With storage, we have a fighting chance.” His team is exploring variations on flow batteries, a system where the battery’s electrodes are in the form of liquids that are pumped through during charging or discharging, allowing for virtually unlimited storage capacity in tanks outside the battery itself. That’s important for storage for solar arrays, which may need to provide backup during a series of overcast days.

Flow batteries are not a new idea, but most have relied on particles of vanadium, a relatively rare and expensive mineral that could preclude widespread deployment. Aziz has found some promising organic compounds, made of cheap and abundant elements, that can already match vanadium’s performance in early lab-scale tests, at “a fraction of the cost.” Further testing is needed to prove the material’s longevity and stability, he said.

Fikile Brushett, a professor of chemical engineering at MIT, described a different broad research program on flow batteries, similar in principle to those described by Aziz but exploring a wide range of possible materials that could be pumped through the batteries in non-water-based solutions.

Kristin Brief, vice president of corporate development at Cambridge-based Ambri, described the progress of that company’s spinoff of technology developed at MIT by John F. Elliott Professor in Materials Science and Engineering Donald Sadoway and his students. The company has already secured more than $50 million in financing from investors including Bill Gates and is in the process of testing its prototypes in real-world installations. The technology is totally unlike any previous commercial battery system, she explained; its two electrodes and the electrolyte between them are all in liquid form, at high temperatures, when the battery is in operation. This allows for a very long lifetime of the operating components.

As for deploying storage systems into the world at a significant scale, Kiran Kumaraswamy described projects that he has been implementing as market development director for a company called AES Energy Storage. Using lithium-ion battery technology that is available now, the company has been designing, financing, and operating grid-scale storage systems in Chile and has others underway in several other countries. A key to working with industries to implement such systems is being able to provide end-to-end management of the whole process, he said.

Increasingly, such approaches are attracting the interest of investors. Nancy Pfund, founder and managing director of venture capital firm DBL Partners, said that her fund has invested heavily over the last 13 years in renewable energy projects, including storage systems. The firm specializes in investments that provide a significant social or environmental benefit, not just profits, and has invested more than $400 million so far in such ventures, working closely with them to bring them to successful fruition.

Colleen Calhoun, a senior executive director at GE, told the many students in the audience that the field of sustainable energy is ripe with opportunities. For those interested in such careers — in any of a wide variety of disciplines that are all essential — she advised in the conference’s final keynote talk, “you’ve got to major in something. Go deep. Have an impact. Become an expert on something.” The world needs the expertise of those who really want to make a difference to the changing energy needs. “We’ve got to make it better,” she said.

In an address that opened the conference on Friday, U.S. Secretary of Energy Ernest Moniz, former MIT physics professor and founding director of the MIT Energy Initiative, also spoke of a strong demand for new jobs in energy-related fields.