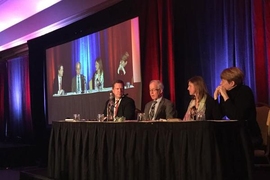 ↓ Download Image
Caption: A concluding panel discussion at the Energy Conference featured (from left) MIT alumnus David Danielson PhD ’08, who was the founder of MIT’s Energy Club and of the Energy Conference, and is now assistant secretary of energy; Ronald Prinn, the Tepco Professor of Atmospheric Physics and director of MIT’s Center for Global Change Science; Elizabeth Wayman, director of the Department of Energy’s Clean Energy Manufacturing Initiative; and Cheryl Martin, deputy director for commercialization at ARPA-E.
Credits: Courtesy of the MIT Energy Conference 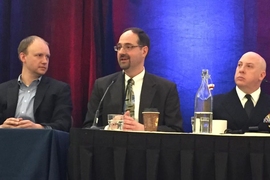 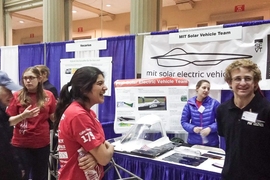 ↓ Download Image
Caption: The Energy Conference concluded with a showcase at MIT’s Walker Memorial, where a variety of energy companies and startups displayed their products.
Credits: Photo: David L. Chandler

Caption:
A concluding panel discussion at the Energy Conference featured (from left) MIT alumnus David Danielson PhD ’08, who was the founder of MIT’s Energy Club and of the Energy Conference, and is now assistant secretary of energy; Ronald Prinn, the Tepco Professor of Atmospheric Physics and director of MIT’s Center for Global Change Science; Elizabeth Wayman, director of the Department of Energy's Clean Energy Manufacturing Initiative; and Cheryl Martin, deputy director for commercialization at ARPA-E.

Caption:
The Energy Conference concluded with a showcase at MIT’s Walker Memorial, where a variety of energy companies and startups displayed their products.

At the conclusion of MIT’s 10th annual Energy Conference, panelist Cheryl Martin, director of the U.S. Department of Energy’s ARPA-E research program, declared, “There is no more important issue than energy.”

Urging students to work to supply sufficient energy for a growing population while reducing emissions, Martin added, “It needs every discipline to be in the game.”

The student-run event was founded by David Danielson PhD ’08, then an MIT graduate student and now the U.S. assistant secretary of energy and director of the Department of Energy (DOE) Office of Energy Efficiency and Renewable Energy. Danielson, who also founded MIT’s Energy Club — now the Institute’s largest student group — returned to campus as both a keynote speaker and as moderator of the final panel discussion at this year’s conference.

“The last 10 years have been a wild ride in energy,” Danielson said, reflecting on dramatic and unexpected changes including the shale-gas boom, the rise of extreme weather events, and a steep drop in the costs of solar and wind power.

Danielson observed that MIT’s long history of cross-disciplinary research has been especially relevant to energy and combating climate change. “This interdisciplinary culture is a critical element,” he said. “The divisions really blur.”

Danielson also reflected on how far the Institute has progressed in energy research and education. When he arrived on campus, in 2001, as a student interested in solar power, he was astonished to find only one course in that field, and no energy-related student organization. Now MIT has dozens of researchers working in the solar arena; the Energy Club has more than 5,000 student, faculty, staff, and alumni members, and organizes more than 100 events every year. Danielson also pointed out that five of the club’s past presidents are now working at the DOE.

And MIT research is having a real impact, he added: Among the 17 initial advanced research projects that the DOE funded when Danielson started working there, one was by Donald Sadoway, the John F. Elliott Professor in Materials Science and Engineering, to produce a low-cost liquid battery for utility-scale storage. While this “phenomenal idea” was first seen as risky and speculative, it has now led to the creation of a company that has raised $50 million and will be installing its first grid-scale batteries this year.

Robert Armstrong, the Chevron Professor in Chemical Engineering and director of the MIT Energy Initiative, kicked off the conference by summarizing a dual challenge: On the one hand, he said, the world is expected to need to double its energy supply by 2050, thanks to a combination of population growth and rising standards of living in developing nations. At the same time, there is a need for drastically reduced emissions from present energy-supply systems, which are still mostly based on fossil fuels. “How do you double the output and still reduce carbon emissions?” Armstrong asked.

He suggested five broad areas that could contribute: a major growth in cheap, reliable solar energy; better methods for storing energy; improvements in the adaptability and reliability of the electric grid; increased use of nuclear energy; and the development of affordable and dependable carbon-capture and sequestration systems.

Seibel, who started C3 Energy after founding and running a large software-services company, said he sees enormous opportunities in applying big-data analytics to the ever-growing data generated by energy-monitoring systems such as smart meters and home-automation devices. “The data rates are staggering,” he said; his company has developed analytical systems that can save utilities $300 per meter, on average, by improving efficiency in power distribution based on real-time usage information.

But Seibel also pointed out the vulnerabilities inherent in the nation’s electric grid, which he called “the largest and most complex machine ever built. … It’s a large problem, and nobody’s going to do anything about it until something breaks.”

Chatila, who left the semiconductor industry to lead solar-energy company SunEdison, said the big challenges for renewable energy are cost and intermittency. But he also finds cause for optimism in the extraordinary, often-unanticipated breakthroughs in the world of microprocessors. Over the last two decades, he said, the cost of solar cells has dropped from $10 a watt to $0.35, a trend he expects to continue. Within a few years, Chatila said, solar will be the lowest-cost option for new electric production, without ongoing subsidy. In fact, he said, that’s already the case in some places, such as in much of India.

Meanwhile, there are enormous opportunities for savings based on using the energy we produce more efficiently, several speakers said. Harvey Michaels, a research scientist and lecturer on energy efficiency at the MIT Sloan School of Management, said that efficiency upgrades such as better home insulation and more efficient appliances and machinery represent a $25 billion field and an “untapped potential resource.”

“When energy prices go through the roof, it’s a lot easier to sell,” Michaels said. “But we’re not going to have that for quite a while.”