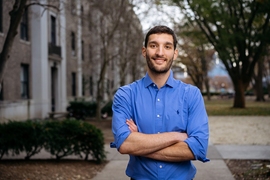 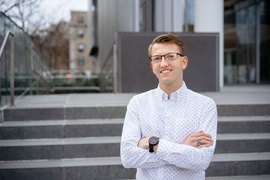 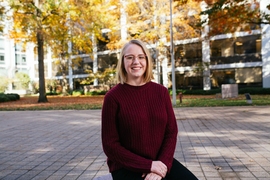 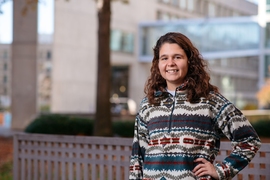 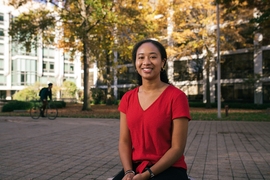 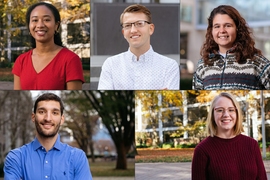 Ali Daher, Claire Halloran, Francisca Vasconcelos, Billy Andersen Woltz, and Megan Yamoah have been selected for the 2020 cohort of the prestigious Rhodes Scholarship program. They will begin fully funded postgraduate studies at Oxford University in the U.K. next fall. Each year, Rhodes awards 32 scholarships to U.S. citizens plus additional scholarships reserved for non-U.S. citizens.

The MIT students were supported by MIT’s Distinguished Fellowships team in Career Advising and Professional Development and the MIT Presidential Committee on Distinguished Fellowships. “It has been a gift to work with all of our applicants, and we are especially gratified when the Rhodes committee sees in them the same traits that we value so highly — not just academic excellence, but also thoughtfulness, creativity, initiative, and moral character,” says Professor Tamar Schapiro, who co-chairs the committee along with Professor Will Broadhead.

Ali Daher, from Amman, Jordan, is a senior majoring in mechanical engineering with a concentration in biomedical engineering. At Oxford, he will pursue an advanced degree in research science engineering. Daher’s Rhodes Scholarship was announced Nov. 15

Hailing from Wauwatosa, Wisconsin, Claire Halloran is a senior majoring in materials science and engineering with minors in energy studies and public policy. At Oxford, Halloran will pursue an MSc in energy systems and a Master of Public Policy. She aspires to become a policy leader who will advocate for legislation that is both technically sound and appropriate for wider social contexts.

Halloran is dedicated to creating clean-energy technologies, advocating for strong climate policy, and disseminating knowledge about climate change. Her research has focused on solar energy technologies, including a project on solar-to fuel conversion reactors for concentrated solar systems with the Electrochemical Materials Laboratory in the MIT Department of Materials Science and Engineering, and an independent research project on silicon and perovskite photovoltaics. During a spring study abroad semester at Oxford, Halloran worked on high-energy-density battery design with the Faraday Institution SOLBAT Project, and this past summer she interned at Form Energy, a startup focused on creating low-cost, long-lasting batteries.

Halloran has interned with the Environmental Defense Fund and held climate policy fellowships with Our Climate and the Better Future Project. On campus, she founded and directs the MIT Climate Action Team, which works to organize the MIT community in support of policies to mitigate climate change. Halloran also holds an executive position and serves as a peer educator with the MIT Violence Prevention and Response team, facilitating peer conversations about sexual violence and healthy relationships.

Francisca Vasconcelos is from San Diego, California, and will graduate in 2020 with a double major in electrical engineering and computer science and in physics. Vasconcelos aspires to become an academic, leading a cutting-edge research lab to tackle problems in machine learning and physics, specifically in the domain of quantum computing. She hopes to develop the algorithms, derive the physics, and design the hardware that will drive forward the next revolution in computing, while inspiring and educating the next generation of quantum engineers. At Oxford, she will pursue an MSc in mathematics and foundations of computer science, as well as an MSc in statistical science.

Vasconcelos plays for the MIT women's club soccer team and has held leadership roles in the MIT Society of Women Engineers and MIT IEEE Undergraduate Research Technology Conference committee. Vasconcelos is an instructor for the MIT EECS IAP “Intro to Quantum Computing” course and is leading the development of a high school quantum computing curriculum with the nonprofit organization The Coding School.

Growing up on a farm in Logan, Ohio, Billy Woltz had limited options for internet service and STEM education. He arrived at MIT with an interest in physics and modeling complicated systems. He will graduate this spring with a double major in physics and electrical engineering and computer science.

At Oxford, Woltz will pursue a second undergraduate degree in philosophy, politics, and economics to acquire skills for making an impact on both the technical and policy aspects of quantum computing. He plans to eventually earn a PhD in physics, conduct research on quantum technologies, and advise legislative bodies on science and technology.

Woltz is currently a research assistant in the Engineering Quantum Systems Group in the Research Laboratory of Electronics where he is working on a superconducting qubit platform for quantum information processing. In the Department of Physics, Woltz designed an algorithm for automating data collection from CERN’s particle detectors with the Laboratory for Nuclear Science, and tested the effects of environmental fluctuations on microbial communities with the Physics of Living Systems Group.

Woltz founded a summer camp to teach computer science skills to underserved Appalachian and refugee students in rural and urban Ohio communities. A 2018 NEWMAC Runner of the Year, he is captain of the MIT varsity track and field and cross-country teams, and has achieved five All-New England honors. He writes investigative journalism articles for the MIT newspaper The Tech, and likes to read and play guitar in his spare time.

Megan Yamoah, from Davis, California, is a senior majoring in physics and electrical engineering. The daughter of immigrants from Ghana and Thailand, she seeks to expand on her engineering background to tackle questions involving technology and international development. At Oxford, she will pursue an MPhil in economics to acquire knowledge in development economics and study how innovation can positively impact emerging economies.

A Goldwater Scholar with several first-author publications and a patent to her name, Yamoah has focused on the cutting edge of quantum computing. As a high school student, she conducted research in the Goldhaber-Gordon Laboratory at Stanford University. Since her freshman year at MIT, she has been assisting Professor William Oliver in the Engineering Quantum Systems Group in the Research Laboratory of Electronics. She also did a summer research internship in the Q Circuits Group at the École Normale Supérieure de Lyon. This past summer, Yamoah attended workshops for the MIT Regional Acceleration Program (REAP) where she connected with diverse stakeholders from around the world on developing initiatives for spurring innovation.

As president of the MIT chapter of the Society of Physics Students, Yamoah worked to develop a physics department statement of values, the first of its kind at MIT. She is an executive board member of Undergraduate Women in Physics and has served multiple roles in the Society of Women Engineers. As a project committee member for MIT Design for America, Yamoah organized workshops for teams creating technology-based solutions for local challenges such as food insecurity.