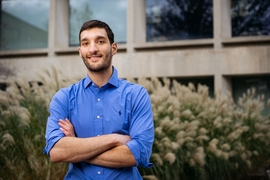 Senior Ali Daher from Amman, Jordan, is a recipient of a Rhodes Scholarship for the Syria, Jordan, Lebanon, and Palestine region. Daher will graduate this fall with a bachelor of science in mechanical engineering with a concentration in biological engineering and then head to Oxford University for graduate study.

As a Rhodes Scholar, he will undertake a degree in research engineering science with the Oxford Mechanobiology Group. Daher is passionate about applying mathematical and engineering principles in an interdisciplinary manner to find solutions to biological problems. He hopes that his future innovations in biomechanical engineering will have both medical and social impacts in society at large, and especially in the Middle East.

“Ali impressed us from the very beginning with his combination of scientific acumen, ethical concern, and deep humanity. He plans not only to advance human health through biomedical device innovation, but also to influence advancements in scientific education in Jordan. Ali demonstrates the very best of MIT,” says Kimberly Benard, assistant dean for distinguished fellowships.

At MIT, Daher worked on a predictive mathematical model for the aggressive brain tumor glioblastoma multiforme with Professor Pierre Lermusiaux in the Multidisciplinary Simulation, Estimation and Assimilation Lab. He also led a project developing a novel approach for better detection of pathogenic mutations as a researcher with the Brigham and Women’s Hospital Division of Genetics. As a research assistant in the Newman Laboratory for Biomechanics and Human Rehabilitation in MIT’s Department of Mechanical Engineering, Daher helped design a robotic medical device to assist survivors of neurological injuries with rehabilitation of gait and balance.

Daher has held executive positions with the MIT Arab Student Organization and the MIT/Harvard Relay for Life, and he has been an orientation leader for MIT International Science and Technology Initiative’s (MISTI) programs for students interning in Jordan and Morocco. In addition to being a teaching assistant at MIT, Daher has tutored students at Jordanian universities and volunteered with displaced populations through Caritas Jordan. Daher plays basketball with MIT’s intramural leagues and in high school was a member of the Jordanian national basketball youth team. He also rediscovered a love of reading through his concentration in literature at MIT, which inspired him to become a Burchard Scholar.

This is the fourth year that the Rhodes Trust has offered a scholarship specifically for talented young citizens from Syria, Jordan, Lebanon, and Palestine. The region awards two scholarships: one for an outstanding Syrian student, and the other for an outstanding student from Jordan, Lebanon, Palestine, or Syria. Winners of the Rhodes Scholarship for U.S. students and other international regions will be announced Nov. 23.

Turning an economics education into solutions with impact