“The human impact that I have is equally, if not more, important to me than the technical rigor of the work I’m doing,” says the senior.
Gina Vitale | MIT News correspondent
Publication Date:
Press Inquiries 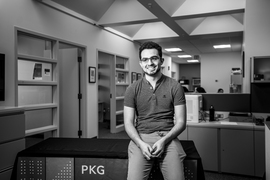 René Andrés García Franceschini grew up in Ponce, Puerto Rico. His parents both work in science — his mother is a medical technologist, and his father is a chemist in Waco, Texas. He has two brothers, one older and one younger. When Hurricane Maria devastated the island last year, he had just started his junior year at MIT. He wasn’t able to reach his mother and siblings for about a week.

“That kind of woke something in me,” he says. “I realized I need to try to ensure that the work that I’m doing, the technical work, is also aligned with trying to help people back home.”

That’s when García Franceschini, a civil and environmental engineering major, reached out to the Priscilla King Gray Public Service Center. Through their pilot program PKG Explore, he spent the 2018 Independent Activities Period traveling through southern Puerto Rico learning about the experience of residents, specifically those with small to medium-size businesses, and trying to understand how the supply chain of essential goods collapsed and what could be done to improve responses in the future. He interviewed more than 50 people, ranging from farmers to shopkeepers to managers at FEMA.

In his conversations, the one bottleneck everyone kept bringing up was energy. He and a friend applied for and received a Davis Projects for Peace Fellowship to work on an energy-sharing solution for residential units that had installed solar arrays. That first project didn’t pan out because of legal complications, but García Franceschini knew he wanted to keep working on energy solutions. He eventually discovered Solstice, a company co-founded by MIT alumna Steph Speirs, which aims to expand solar energy access to all Americans.

“I found their mission really fascinating,” says García Franceschini, who worked for Solstice last summer as a data analyst fellow.

Developers in community solar projects tend to ask for a FICO credit score that is above a certain number. People with lower incomes often have lower scores, even if they’re able to pay, García Franceschini explains. Using machine-learning models, Solstice created a metric to be used in place of FICO credit scores — one that is more inclusive of people with low to moderate incomes. He continues to support the implementation of the metric and work on logistics through a series of pilot projects.

“It was … a really cool way to combine a lot of very disparate interests that I had,” he says. The experience combined “the whole renewable energy aspect, with social equity and social entrepreneurship, with things that are specifically geared toward low- to moderate-income Americans.”

In the fall of his sophomore year, García Franceschini was dealing with depression. He decided to go on leave for the rest of the academic year.

“I look back at it with a little bit of sadness,” he says. “It was the first time that I showed my parents around my school, and it was to pick me up.”

“Going on leave was a really important part of my MIT experience. It was also not a very pleasant one,” he says, about the difficulty of making the decision to leave campus and the process of moving back home. “They really helped me through that process. … Even now I really can’t thank them [S3] enough for, for everything that they did for me.”

García Franceschini is now a leave/return mentor, meaning he advises students who are considering going on leave. This program evolved out of a 2015-2016 review of the withdrawal and readmission practices and ensures there is an extended network of support for students thinking about taking leave, on leave, or planning a return to MIT. S3 also holds a lunch for students coming back from leave every semester, and he has served as a panelist every semester since his own return.

“I notice that every time I serve on this panel, it gets harder and harder for me to recall the exact experiences I went through,” he says. “And I think that shows that, although the transition is definitely difficult, after a while you’re no different than students that haven’t left.”

García Franceschini had come into MIT hoping to study physics, and later declared chemistry as his major. While on leave after his first year, teaching computer science back home at Puerto Rico, he had a change of heart.

“I realized that, for me the actual human impact that I have is equally, if not more, important than the technical rigor of the work that I’m doing,” he says.

When he returned to school, he changed his major to civil and environmental engineering. He also discovered a group called CASE, which stands for Class Awareness Support and Equality. It was a club designed to help people at MIT who were struggling financially, and to discuss issues related to socioeconomic class.

He joined the club in 2016 as funding coordinator and became president the next year, a position that he still holds. Through CASE, he and the other members have hosted workshops on socioeconomic class and financial literacy, and have worked on projects to help people with challenges such as food insecurity, budgeting, and finding housing for their parents during commencement.

García Franceschini is also a member of the Bernard M. Gordon-MIT Engineering Leadership Program, or GEL. The program involves taking classes about leadership and reinforcing those lessons at the end of each week by having students practice the skills they’ve learned.

His fraternity, Theta Delta Chi, has also been a significant part of his life at MIT. He joined during his first year at MIT and has been an officer every semester that he’s been in TDC. He’s matured a lot because of living at the house, he says, and it’s where he found many of his best friends. Since moving off campus, he’s also taken up biking — something he didn’t know how to do until this summer when he started working at Solstice.

“I just realized, wow, I really missed out on a lot in those 21 years when I did not know how to bike,” he says.

García Franceschini hasn’t made up his mind about what he wants to do after graduation. While he might remain at Solstice, he’s interested in graduate programs that apply data science and statistics toward social equity programs.