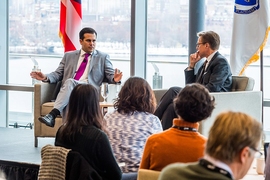 ↓ Download Image
Caption: At the MIT Conference for the Resilient Reconstruction of the Caribbean, Puerto Rico’s governor, Ricardo Rosselló ’01 (left), described the devastation of recent hurricanes and discussed opportunities for collaboration on resilient rebuilding. He spoke with Robert Stoner, deputy director of the MIT Energy Initiative and director of the Tata Center for Technology and Design. 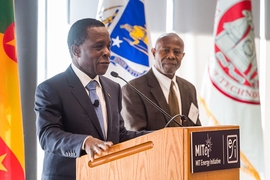 ↓ Download Image
Caption: Prime Minister of Grenada Keith Mitchell (left) spoke about how the Caribbean community is coping with the aftermath of the hurricanes. He was introduced by Cardinal Warde, a professor of electrical engineering (right) and longtime friend of the prime minister.

Caption:
At the MIT Conference for the Resilient Reconstruction of the Caribbean, Puerto Rico’s governor, Ricardo Rosselló ’01 (left), described the devastation of recent hurricanes and discussed opportunities for collaboration on resilient rebuilding. He spoke with Robert Stoner, deputy director of the MIT Energy Initiative and director of the Tata Center for Technology and Design.

Caption:
Prime Minister of Grenada Keith Mitchell (left) spoke about how the Caribbean community is coping with the aftermath of the hurricanes. He was introduced by Cardinal Warde, a professor of electrical engineering (right) and longtime friend of the prime minister.

This fall’s record-breaking hurricanes Maria and Irma left a swath of devastation across the Caribbean islands of Puerto Rico, Granada, Dominica, and others. Photos of severely damaged or demolished houses, and statistics about the scale of the destruction and the slow pace of recovery efforts, reveal a tragic level of suffering in an already economically ravaged region.

In a two-day conference at MIT on Dec. 12-13, leaders from the region brainstormed with researchers from MIT and elsewhere to develop strategies for not just rebuilding the islands’ ruined infrastructure, but making it better and more resilient to the ever-growing threat of powerful hurricanes. The conference was co-hosted by the MIT Energy Initiative and Environmental Solutions Initiative.

Ricardo Rosselló ’01, the governor of Puerto Rico and an MIT alumnus with a degree in chemical engineering, cast the terrible damage suffered by his and neighboring islands as “a once-in-a-lifetime opportunity” to rebuild in a way that would be significantly more resilient in the face of future natural disasters. That could include, he suggested, creating a less-centralized electric grid and building housing according to stronger codes for withstanding high winds and flooding.

Already, before the hurricanes struck, his administration had proposed a 15-year vision for a new, more resilient electrical grid. “Now, we can think about rebuilding it in three years, in a much bolder and more modern way,” he said, “and make sure we use this crisis as an opportunity” to achieve lasting improvements. “We may use this to make Puerto Rico a model for the Caribbean.” Similarly, he said, instead of just rebuilding the 10 schools that were destroyed, given that the school population has declined by half, they may build “three that are new and modern and resilient,” making better use of limited resources.

As an example of the innovative possibilities, he cited an ongoing dialog he has been having with Elon Musk, the CEO of Tesla Motors and SolarCity, who has offered to create a model solar-based power system for Puerto Rico. Rosselló says he has been in communication with Musk and others at Tesla, including several representatives of the company who have come to the island to work on a detailed proposal for a grid largely based on solar panels and battery storage systems.

In an interview with MIT News, Rosselló described his response to a tweet from Musk: “I sent a tweet out challenging him, saying ‘you want to show your model is scalable, and Puerto Rico offers you a platform to do it.’ And then the conversation started. I spoke to him a few times, and yesterday [Dec. 11] we just announced a public-private partnership model. We received an unsolicited proposal from Tesla, which includes at least the first phase, of 600 megawatts of generation using solar and batteries.” If the proposal gets accepted, then it will be opened up as a formal request for proposals to see if anyone else could match the offer. “We’re very excited about Tesla’s involvement,” he said.

At this point, he said, about 63 percent of Puerto Rico’s power grid has been brought back online, and 95 percent of residents now have access to potable water. Still, about half a million homes were severely damaged or destroyed, he said, so the rebuilding effort will go on for a very long time. And all of this has happened on an island that was already battered by what Rosselló called a “hurricane of the manmade kind,” namely the territory’s $70-plus billion debt.

Potentially making things even worse, he said, would be passage of the tax bill now before Congress, which he said would unfairly punish Puerto Rico with the burden of extra tariffs, at the worst possible time. “It is weird that we have to go to Congress and ask them to treat us the same as everyone else,” he said. “The tax reform act levies a severe tax on Puerto Rico, by treating us as a foreign country.”

The two-day conference also featured Keith Mitchell, the prime minister of Grenada, which was also battered by the back-to-back hurricanes. Mitchell also emphasized the importance of not just restoring but revamping the electrical systems. “Electricity is such a critical factor in reconstruction,” he said. “Without it, it’s going to be impossible to recover.” On the nearby island nation of Dominica, which he toured recently, he said “every electric pole is on the ground. It was one of the most painful scenes I’ve ever had to witness.”

He said that during the recent international climate conference in Paris, he was able to secure commitments for $4 billion in reconstruction aid, and billionaire entrepreneur Richard Branson has offered to help in mobilizing the private sector to provide more aid. But that is still far short of what the Caribbean region will need to rebuild, he said.

And, echoing Rosselló’s vision of the need for creating an improved electrical system, he said that “affordable clean energy provides the greatest potential for economic revitalization of the region.” It’s also vital, he said, because the global warming produced by greenhouse gas emissions poses “an existential threat for all Caribbean nations” due to the potential for extreme sea level rise and more powerful hurricanes.

In deciding on appropriate methods of reconstruction, “there is a tension, by default, in acting quickly while bearing in mind the long term,” said John Fernández, director of MIT’s Environmental Solutions Initiative. While there is great urgency in restoring the basic services of water, power, and roads that people depend on, he said, it’s also important at every step to ask: “How do you rebuild in a way such that what you end up with is better” than what was there before?

Overall, the conference was intended to be the first step in an ongoing process of involving MIT in the planning and execution of innovative reconstruction for the region, rather than simply aiming to rebuild things as they were, said Robert Stoner, director of MIT’s Tata Center for Technology and Design.

For example, it turns out that of the solar panels that did exist on the islands, home-based rooftop panels in general survived better than large solar installations. But even among the large arrays, some were completely destroyed, while others suffered relatively minor damage, so studying the details of what worked and what didn’t could provide important lessons for future construction. Similarly, studying which buildings stood up to the winds and which were flattened by them could lead to important changes in building codes to foster greater resilience.

The conference looked at three broad areas of reconstruction, and how to achieve improvements in each of them: the electrical system; settlements (not just individual buildings, but also the roads and delivery systems that make them function); and the water, sewage, and other key infrastructure systems needed for survival.

The next step of MIT’s participation in the rebuilding will include several teams of students who will be spending January’s Independent Activities Period in the region, assessing damage and working with local people to develop appropriate solutions. Then, through further meetings, the Institute will try to figure out how best to continue the efforts at working together to develop and implement innovative solutions, Stoner said. “We have an opportunity to use planning and computational tools that didn’t exist” when most of the region’s present structures were built, he said.

“I hope this can be the start of a great collaboration,” Rosselló said.

Boston Globe reporter David Abel reports on Puerto Rico Governor Ricardo Rosselló's ’01 visit to MIT for the Conference for the Resilient Construction of the Caribbean. The governor shared his frustration with proposed federal tax policies while expressing optimism about working with MIT on solutions for climate-resilient reconstruction after this fall’s hurricanes.

Meghna Chakrabarti of WBUR’s Radio Boston speaks to Puerto Rico Governor Ricardo Rossello ‘01 about the needs and the status of the island, plans to rebuild infrastructure, and how the new tax plan will affect Puerto Rico’s economy. Rossello was in Boston for the MIT Conference on the Resilient Reconstruction of the Caribbean.