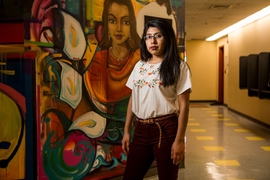 ↓ Download Image
Caption: With one foot in a dual bachelor’s and master’s program in urban studies and the other in an array of educational and community outreach programs, Yazmin Guzman applies the same careful coordination she perfected as a Mexican folkloric dancer to her life at MIT.

Caption:
With one foot in a dual bachelor’s and master’s program in urban studies and the other in an array of educational and community outreach programs, Yazmin Guzman applies the same careful coordination she perfected as a Mexican folkloric dancer to her life at MIT.

With one foot in a dual bachelor’s and master’s program in urban studies and the other in an array of educational and community outreach programs, Yazmin Guzman applies the same careful coordination she perfected as a Mexican folkloric dancer to her life at MIT.

The senior from Wichita, Kansas, is determined to gain the experiences she needs to begin a career that will help seal cracks in the public education system.

Guzman, who is fluent in both English and Spanish, experienced one of those cracks firsthand during elementary school. “I remember one time [the school staff] pulled me out of class to translate for someone else because they didn’t have any translators. I was 7 years old,” Guzman recalls. “This would be a continuous thing they would do because there was a new wave of Latino immigrants coming in, and they were unprepared.”

Soon after, Guzman moved into an academic program for gifted and talented students, and she noticed that few other Latino students were in her classes. “I wasn’t really as in touch with my culture in that school,” Guzman says. When she arrived at MIT, she says it was the first time she was exposed to the idea that Latino students could succeed in academia.

Eager to connect with other Latino students, Guzman joined La Casa, a living community at MIT that celebrates Latino culture and the Spanish language. “It was a really good place for me to be,” Guzman says. “Living there was a huge defining moment. Meeting the people [at La Casa] was the biggest change in my life.”

“My heart is there,” she adds.

Guzman says the community helped her refine her focus in education. Community dinners, discussions, and hangouts enabled members to share their own educational experiences with others, highlighting for her the discrepancies in educational opportunities for Latino students in public schools. Guzman, who is pursuing a minor in economics, is also inspired by work of economist Roland G. Fryer, Jr. “He’s doing all this amazing work with the black-white achievement gap,” Guzman says. “I want to do something like that but [related to] Latino and white people.”

“I tell people that my life passion is to help other people pursue their passions,” Guzman says. She does this in part through Amphibious Achievement, a dual athletic-academic mentoring program that brings underresourced students to MIT each Sunday to develop skills in swimming and rowing, and to take part in reading, mathematics, and SAT tutoring with their mentors. This year, Guzman is the director of academics for the program, and she hopes to encourage the development of hands-on learning activities for the students.

Guzman recalls a recent experience she had with her current advisee, Kevin, whom she has mentored for the past two years. “He was practicing to get into one of the Boston examination schools, so we just sat for six hours and studied [together for the exam]. … The fact that I was able to provide him with something he wouldn’t have access to otherwise is one of the best parts of being a mentor to him and being in Amphibious Achievement.”

In addition to working extensively in mentorship and educational outreach, Guzman recently joined the Committee on Academic Performance (CAP), which monitors the academic performance of undergraduate students at the Institute. She spent Independent Activities Period learning the processes and procedures of the committee.

“A lot of my friends struggled a lot throughout MIT. I’ve had friends who have had to take academic leave,” Guzman says. “So what I really wanted to do was advocate for students and give a different perspective as someone who has had direct contact with [students reviewed by the committee].” Guzman says working on the committee has given her insight into academic administration.

Guzman wants to use these experiences to help her achieve her goal of becoming a superintendent of a school district or founder of a charter school. In order to further prepare herself, Guzman also aims to teach middle school after she graduates with a master’s degree in city planning.

“I want to become a teacher for a little bit because the ultimate end game is to make an impact on education policy,” Guzman says, “but I feel like in order to do that, I need to have the experience in the classroom.”

“I’m really interested in how communities occupy a space and make it their own,” Guzman says. As part of her potential thesis project, Guzman hopes to create a photo series depicting the communities in the Latino Cultural Center, the Black Student Union, the Rainbow Lounge, and MIT SPXCE Intercultural Center. Guzman wants to focus on groups in higher education institutions that have been historically marginalized.

Guzman credits her advisor, Justin Steil, the Charles H. and Ann E. Spaulding Career Development Assistant Professor in the Department of Urban Studies and Planning, for helping her direct her focus toward education inequality and the role communities play in education.

In her urban planning studies, Guzman looks at how schools are anchored in communities. “Things that go on in someone’s neighborhood are very much linked to how they perform in school,” Guzman says. Making sure education provides students with viable opportunities involves “addressing [neighborhood and community issues] and figuring out some way to develop both the community and school at the same time.”

“There are a lot of kids that are falling through the cracks that could definitely make it. And for some reason they’re not,” Guzman says. “And so that’s what I really focus on. … I want to focus on students specifically in K through 12 who don’t even make it to the 12.”

Guzman’s commitment to younger students inspired the photo-based format of her potential thesis. “That’s why I wanted to do photography,” Guzman says, “because I’m doing something I want people to actually learn from. … I want it to be something that’s accessible.”

As part of her community development efforts at MIT, Guzman is also an active member of Mujeres Latinas, a cultural student group focused on social and professional advancement of Latinas in and around the MIT community. The group recently received an MIT MindHandHeart Grant to establish the Hermanas Unidas Initiative, to bring together Latina undergraduate students, graduate students, and MIT faculty and staff to foster an academic and cultural community for Latinas across campus.

Even though Guzman’s time is divided among her academics, mentorship, teaching, and community-building, she maintains a laser focus on education.

“I’m passionate about people … reaching their highest potentials,” Guzman says, “I’ll help them do that. That’s all I want to do.”