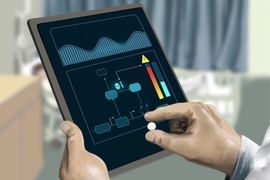 ↓ Download Image
Caption: MIT biological engineers have devised a way to regulate the expression of RNA once it gets into cells, giving them precise control over the dose of protein that a patient receives, as shown in this conceptual image.
Credits: Image: Noa Alon

Caption:
MIT biological engineers have devised a way to regulate the expression of RNA once it gets into cells, giving them precise control over the dose of protein that a patient receives, as shown in this conceptual image.
Credits:
Image: Noa Alon

Delivering functional genes into cells to replace mutated genes, an approach known as gene therapy, holds potential for treating many types of diseases. The earliest efforts to deliver genes to diseased cells focused on DNA, but many scientists are now exploring the possibility of using RNA instead, which could offer improved safety and easier delivery.

MIT biological engineers have now devised a way to regulate the expression of RNA once it gets into cells, giving them precise control over the dose of protein that a patient receives. This technology could allow doctors to more accurately tailor treatment for individual patients, and it also offers a way to quickly turn the genes off, if necessary.

“We can control very discretely how different genes are expressed,” says Jacob Becraft, an MIT graduate student and one of the lead authors of the study, which appears in the Oct. 16 issue of Nature Chemical Biology. “Historically, gene therapies have encountered issues regarding safety, but with new advances in synthetic biology, we can create entirely new paradigms of ‘smart therapeutics’ that actively engage with the patient’s own cells to increase efficacy and safety.”

Becraft and his colleagues at MIT have started a company to further develop this approach, with an initial focus on cancer treatment. Tyler Wagner, a recent Boston University PhD recipient, is also a lead author of the paper. Tasuku Kitada, a former MIT postdoc, and Ron Weiss, an MIT professor of biological engineering and member of the Koch Institute, are senior authors.

Only a few gene therapies have been approved for human use so far, but scientists are working on and testing new gene therapy treatments for diseases such as sickle cell anemia, hemophilia, and congenital eye disease, among many others.

As a tool for gene therapy, DNA can be difficult to work with. When carried by synthetic nanoparticles, the particles must be delivered to the nucleus, which can be inefficient. Viruses are much more efficient for DNA delivery; however, they can be immunogenic, difficult, and expensive to produce, and often integrate their DNA into the cell's own genome, limiting their applicability in genetic therapies.

Messenger RNA, or mRNA, offers a more direct, and nonpermanent, way to alter cells’ gene expression. In all living cells, mRNA carries copies of the information contained in DNA to cell organelles called ribosomes, which assemble the proteins encoded by genes. Therefore, by delivering mRNA encoding a particular gene, scientists can induce production of the desired protein without having to get genetic material into a cell’s nucleus or integrate it into the genome.

To help make RNA-based gene therapy more effective, the MIT team set out to precisely control the production of therapeutic proteins once the RNA gets inside cells. To do that, they decided to adapt synthetic biology principles, which allow for precise programming of synthetic DNA circuits, to RNA.

“Due to the dynamic nature of replication, the circuits’ performance can be tuned to allow different proteins to express at different times, all from the same strand of RNA,” Becraft says.

This allows the researchers to turn on the circuits at the right time by using “small molecule” drugs that interact with RNA-binding proteins. When a drug such as doxycycline, which is already FDA-approved, is added to the cells, it can stabilize or destabilize the interaction between RNA and RNA-binding proteins, depending on how the circuit is designed. This interaction determines whether the proteins block RNA gene expression or not.

In a previous study, the researchers also showed that they could build cell-specificity into their circuits, so that the RNA only becomes active in the target cells.

The company that the researchers started, Strand Therapeutics, is now working on adapting this approach to cancer immunotherapy — a new treatment strategy that involves stimulating a patient’s own immune system to attack tumors.

Using RNA, the researchers plan to develop circuits that can selectively stimulate immune cells to attack tumors, making it possible to target tumor cells that have metastasized to difficult-to-access parts of the body. For example, it has proven difficult to target cancerous cells, such as lung lesions, with mRNA because of the risk of inflaming the lung tissue. Using RNA circuits, the researchers first deliver their therapy to targeted cancer cell types within the lung, and through their genetic circuitry, the RNA would activate T-cells that could treat the cancer’s metastases elsewhere in the body.

“The hope is to elicit an immune response which is able to pick up and treat the rest of the metastases throughout the body,” Becraft says. “If you’re able to treat one site of the cancer, then your immune system will take care of the rest, because you’ve now built an immune response against it.”

Using these kinds of RNA circuits, doctors would be able to adjust dosages based on how the patient is responding, the researchers say. The circuits also provide a quick way to turn off therapeutic protein production in cases where the patient’s immune system becomes overstimulated, which can be potentially fatal.

In the future, the researchers hope to develop more complex circuits that could be both diagnostic and therapeutic — first detecting a problem, such as a tumor, and then producing the appropriate drug.

The research was funded by the Defense Advanced Research Projects Agency, the National Science Foundation, the National Institutes of Health, the Ragon Institute of MGH, MIT, and Harvard, the Special Research Fund from Ghent University, and the Research Foundation – Flanders.

Killing a cancer cell from the inside out