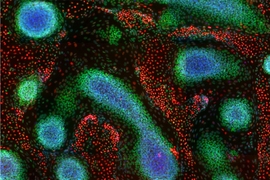 Caption:
This image demonstrates tissue patterns that emerge from genetically programmed human pluripotent stem cells, and was taken on day nine of the MIT study. It shows immunostainings of cell nuclei for CEBPA (red, endodermal marker), SOX10 (green, ectodermal marker), and DAPI (blue, binds to DNA in the nucleus).
Credits:
Courtesy of the researchers

A new technique for programming human stem cells to produce different types of tissue on demand may ultimately allow personalized organs to be grown for transplant patients.

The technique, which also has near-term implications for growing organ-like tissues on a chip, was developed by researchers at MIT and is unveiled in a study published today in the journal Nature Communications.

Growing organs on demand, using stem cells derived from patients themselves, could eliminate the lengthy wait that people in need of a transplant are often forced to endure before one becomes available.

It could also reduce the risk of a patient’s immune system rejecting the transplant, since the tissue would be grown from the patient’s own cells, according to Ron Weiss, professor of biological engineering at MIT, who led the research.

“Imagine that there is a patient with liver complications,” Weiss says. “We could take skin cells from that person and then [convert] them into stem cells, and then genetically program them to make the liver tissue, and transplant that into the patient.”

The researchers developed the new technique while investigating whether they could use stem cells to produce pancreatic beta cells for treating patients with diabetes.

In order to do this, the researchers needed to devise a means to convert stem cells into pancreatic beta cells on demand.

As a first step in this process, they took human induced pluripotent stem (IPS) cells — stem cells generated from adult fibroblast, or skin cells — and converted them into “endoderm,” one of the three primary cell types in a developing organism. Endoderm, mesoderm, and ectoderm make up the three so-called germ layers that contribute to nearly all of the different cell types in the body. “They are the first real step of [cell] differentiation,” Weiss says.

The researchers developed a method to use a type of small molecule called dox to induce the IPS cells to express a protein known as GATA6. This protein can convert IPS cells into endoderm.

Rather than immediately attempting to convert these endoderm cells into pancreatic cells though, the paper’s lead author, Patrick Guye, a former postdoc in Weiss’ lab and currently laboratory head with Sanofi-Aventis in Frankfurt, Germany, then decided to allow the cells to continue growing, to monitor their progress.

After two weeks, the researchers found that the endoderm, and some mesoderm also present in the cell culture, had matured further, to form a liver “bud,” or small, rudimentary liver.

“We observed the development of many cells types found in the fetal liver, including the development of blood vessel-like networks, various mesenchymal precursors, and the formation of early red and white blood cells within our liver-like tissue,” Guye says. “This is especially exciting, as the process looks very similar if not identical to what is happening in the early liver bud in vivo, that is, in our own development.”

What’s more, the researchers discovered that only those IPS cells that had been exposed to more of the genetic programming, and had therefore gone on to produce more GATA6, became liver tissue. Alongside these were IPS cells that did not make much GATA6, which went on to form ectoderm instead, and then further matured to become early telencephalon, or forebrain.

By controlling how much GATA6 the cells expressed, the researchers were able to determine how much liver bud and how much forebrain tissue was generated, Weiss says.

This suggests that the technique could be used to produce not just individual tissue types, but different combinations of tissue, he says.

“The fact that we are able to produce endoderm, mesoderm, and ectoderm gives us great hope that we can take each of these germ layers and hopefully grow any kind of tissue we want,” he says.

While it is likely to be some time before the technique can be used to generate transplant organs, it could be used almost immediately to grow different human tissue on which to test new drugs, Weiss says.

Using human stem cell-derived organ tissue to test new treatments could be far more reliable than testing on animals, since different species may react differently to a drug, he says.

The technique could also allow clinicians to carry out patient-specific drug testing. “If you are not sure whether you will have complications from taking a particular drug, then before you take it you could try it out on your own liver-on-a-chip,” Weiss says.

Similarly, the organ-on-a-chip could be used to monitor the interaction between different drugs that people may be taking.

“As people age, some are taking 10, 15, or 20 drugs together, and it’s impossible for the pharmaceutical companies to test all of these combinations for every individual. But we would be able to test that out,” he says. “That is something that can be done now.”

In addition to these therapeutic applications, the technique could allow researchers to gain a better understanding of the development of different types of tissue, such as the liver and neurons.

The paper reveals some intrinsic mechanisms underlying the interactions of stem cells during liver development, and provides a useful model that sheds light on the complex process of embryogenesis, says Bing Song, a professor of tissue engineering at Cardiff University in the UK, who was not involved in the research.

"In my field, which is combining genetically modified stem cells and physical stimulation (electrical and magnetic) to cure spinal cord injuries and degenerative disease, the paper has given me some very useful ideas," he says.

The researchers now hope to investigate whether they can use the technique to grow other organs on demand, such as a pancreas.