Caption:
MIT researchers have generated mature liver cells from induced pluripotent stem cells. In this image, the cell nuclei are stained blue. The green stain identifies liver cells, and the red spots represent mature liver cells.
Credits:
Image: Shan et al, <i>Nature Chemical Biology</i>, 2013
Prometheus, the mythological figure who stole fire from the gods, was punished for this theft by being bound to a rock. Each day, an eagle swept down and fed on his liver, which then grew back to be eaten again the next day.

Modern scientists know there is a grain of truth to the tale, says MIT engineer Sangeeta Bhatia: The liver can indeed regenerate itself if part of it is removed. However, researchers trying to exploit that ability in hopes of producing artificial liver tissue for transplantation have repeatedly been stymied: Mature liver cells, known as hepatocytes, quickly lose their normal function when removed from the body.

“It’s a paradox because we know liver cells are capable of growing, but somehow we can’t get them to grow” outside the body, says Bhatia, the John and Dorothy Wilson Professor of Health Sciences and Technology and Electrical Engineering and Computer Science at MIT, a senior associate member of the Broad Institute and a member of MIT’s Koch Institute for Integrative Cancer Research and Institute for Medical Engineering and Science.

Now, Bhatia and colleagues have taken a step toward that goal. In a paper appearing in the June 2 issue of Nature Chemical Biology, they have identified a dozen chemical compounds that can help liver cells not only maintain their normal function while grown in a lab dish, but also multiply to produce new tissue. 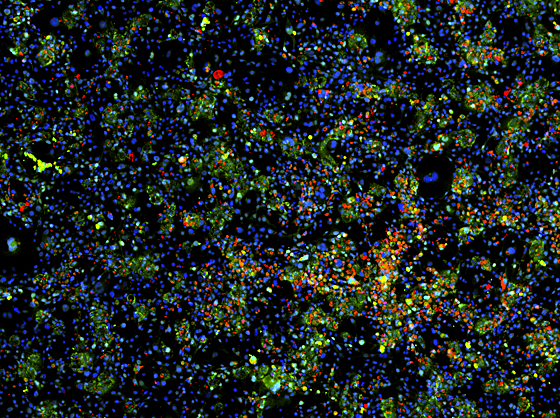 Cells grown this way could help researchers develop engineered tissue to treat many of the 500 million people suffering from chronic liver diseases such as hepatitis C, according to the researchers.

Lead author of the paper is Jing (Meghan) Shan, a graduate student in the Harvard-MIT Division of Health Sciences and Technology. Members of Bhatia’s lab collaborated with researchers from the Broad Institute, Harvard Medical School and the University of Wisconsin.

Bhatia has previously developed a way to temporarily maintain normal liver-cell function after those cells are removed from the body, by precisely intermingling them with mouse fibroblast cells. For this study, funded by the National Institutes of Health and Howard Hughes Medical Institute, the research team adapted the system so that the liver cells could grow, in layers with the fibroblast cells, in small depressions in a lab dish. This allowed the researchers to perform large-scale, rapid studies of how 12,500 different chemicals affect liver-cell growth and function.

The liver has about 500 functions, divided into four general categories: drug detoxification, energy metabolism, protein synthesis and bile production. David Thomas, an associate researcher working with Todd Golub at the Broad Institute, measured expression levels of 83 liver enzymes representing some of the most finicky functions to maintain.

After screening thousands of liver cells from eight different tissue donors, the researchers identified 12 compounds that helped the cells maintain those functions, promoted liver cell division, or both.

Two of those compounds seemed to work especially well in cells from younger donors, so the researchers — including Robert Schwartz, an IMES postdoc, and Stephen Duncan, a professor of human and molecular genetics at the University of Wisconsin — also tested them in liver cells generated from induced pluripotent stem cells (iPSCs). Scientists have tried to create hepatocytes from iPSCs before, but such cells don’t usually reach a fully mature state. However, when treated with those two compounds, the cells matured more completely.

Bhatia and her team wonder whether these compounds might launch a universal maturation program that could influence other types of cells as well. Other researchers are now testing them in a variety of cell types generated from iPSCs.

In future studies, the MIT team plans to embed the treated liver cells on polymer tissue scaffolds and implant them in mice, to test whether they could be used as replacement liver tissues. They are also pursuing the possibility of developing the compounds as drugs to help regenerate patients’ own liver tissues, working with Trista North and Wolfram Goessling of Harvard Medical School.

Eric Lagasse, an associate professor of pathology at the University of Pittsburgh, says the findings represent a promising approach to overcoming the difficulties scientists have encountered in growing liver cells outside of the body. “Finding a way of growing functional hepatocytes in cell culture would be a major breakthrough,” says Lagasse, who was not part of the research team.

Bhatia and colleagues have also recently made progress toward solving another challenge of engineering liver tissue, which is getting the recipient’s body to grow blood vessels to supply the new tissue with oxygen and nutrients. In a paper published in the Proceedings of the National Academy of Sciences in April, Bhatia and Christopher Chen, a professor at the University of Pennsylvania, showed that if preformed cords of endothelial cells are embedded into the tissue, they will rapidly grow into arrays of blood vessels after the tissue is implanted.

To achieve this, Kelly Stevens in the Bhatia lab worked with Peter Zandstra at the University of Toronto to design a new system that allows them to create 3-D engineered tissue and precisely control the placement of different cell types within the tissue. This approach, described in the journal Nature Communications in May, allows the engineered tissue to function better with the host tissue.

“Together, these papers offer a path forward to solve two of the longstanding challenges in liver tissue engineering — growing a large supply of liver cells outside the body and getting the tissues to graft to the transplant recipient,” Bhatia says.