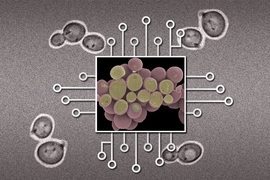 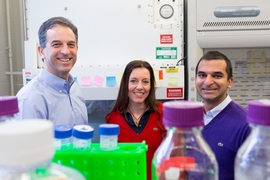 Researchers have made great progress in recent years in the design and creation of biological circuits — systems that, like electronic circuits, can take a number of different inputs and deliver a particular kind of output. But while individual components of such biological circuits can have precise and predictable responses, those outcomes become less predictable as more such elements are combined.

A team of researchers at MIT has now come up with a way of greatly reducing that unpredictability, introducing a device that could ultimately allow such circuits to behave nearly as predictably as their electronic counterparts. The findings are published this week in the journal Nature Biotechnology, in a paper by associate professor of mechanical engineering Domitilla Del Vecchio and professor of biological engineering Ron Weiss.

There are many potential uses for such synthetic biological circuits, Del Vecchio and Weiss explain. “One specific one we’re working on is biosensing — cells that can detect specific molecules in the environment and produce a specific output in response,” Del Vecchio says. One example: cells that could detect markers that indicate the presence of cancer cells, and then trigger the release of molecules targeted to kill those cells.

It is important for such circuits to be able to discriminate accurately between cancerous and noncancerous cells, so they don’t unleash their killing power in the wrong places, Weiss says. To do that, robust information-processing circuits created from biological elements within a cell become “highly critical,” Weiss says.

To date, that kind of robust predictability has not been feasible, in part because of feedback effects when multiple stages of biological circuitry are introduced. The problem arises because unlike in electronic circuits, where one component is physically connected to the next by wires that ensure information is always flowing in a particular direction, biological circuits are made up of components that are all floating around together in the complex fluid environment of a cell’s interior.

Information flow is driven by the chemical interactions of the individual components, which ideally should affect only other specific components. But in practice, attempts to create such biological linkages have often produced results that differed from expectations.

“If you put the circuit together and you expect answer ‘X,’ and instead you get answer ‘Y,’ that could be highly problematical,” Del Vecchio says.

The device the team produced to address that problem is called a load driver, and its effect is similar to that of load drivers used in electronic circuits: It provides a kind of buffer between the signal and the output, preventing the effects of the signaling from backing up through the system and causing delays in outputs.

While this is relatively early-stage research that could take years to reach commercial application, the concept could have a wide variety of applications, the researchers say. For example, it could lead to synthetic biological circuits that constantly measure glucose levels in the blood of diabetic patients, automatically triggering the release of insulin when it is needed.

The addition of this load driver to the arsenal of components available to those designing biological circuits, Del Vecchio says, “could escalate the complexity of circuits you could design,” opening up new possible applications while ensuring that their operation is “robust and predictable.”

James Collins, a professor of biomedical engineering at Boston University who was not associated with this research, says, “Efforts in synthetic biology to create complex gene circuits are often hindered by unanticipated or uncharacterized interactions between submodules of the circuits. These interactions alter the input-output characteristics of the submodules, leading to undesirable circuit behavior.”

But now, Collins says, “Del Vecchio and Weiss have made a major advance for the field by creating a genetic device that can account for and correct for such interactions, leading to more predictable circuit behavior.”

The research was supported by an Eni-MIT Energy Research Fellowship, the National Science Foundation, the U.S. Army Research Office, the U.S. Air Force Office of Scientific Research, and the National Institutes of Health.

Living cells say: Can you hear me now?