How often do medical problems lead to bankruptcy? 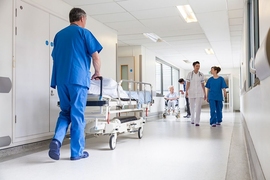 ↓ Download Image
Caption: A team of researchers led by an MIT economist has found that medical expenses account for roughly 4 percent of bankruptcy filings among nonelderly adults in the U.S.

Caption:
A team of researchers led by an MIT economist has found that medical expenses account for roughly 4 percent of bankruptcy filings among nonelderly adults in the U.S.

A team of researchers led by an MIT economist has found that medical expenses account for roughly 4 percent of bankruptcy filings among nonelderly adults in the U.S.

The scholars combined medical records and financial data for hundreds of thousands of people to pinpoint the percentage of bankruptcies caused by medical costs, thus giving new empirical precision to a topic of considerable policy importance.

The 4 percent figure is lower than some commonly cited estimates, but the new statistic comes with a twist: It is part of a larger research project that found multiple negative economic consequences of having medical problems, including a 20 percent drop in earnings and an 11 percent drop in employment for adults between ages 50 and 59 who had been hospitalized.

This combination of effects — fewer medically rooted bankruptcies but pervasive workplace troubles for people with health issues — underscores the need to understand the full range of financial challenges people face due to their medical needs, the researchers say.

“It doesn’t mean there aren’t really adverse economic consequences from adverse health,” says MIT economist Amy Finkelstein, co-author of a new paper outlining the findings. “It just turns out they’re not [strictly] about bankruptcy. They’re much more about lost employment and earnings.”

The study’s main source of data consists of hospitalization records from the years 2003–2007 and credit reports from 2002–2011, from the state of California, for people over age 25. The study included about 780,000 people with health insurance and roughly 150,000 people without health insurance. That information was available to the research team only under particular conditions that preserved the anonymity of the people being studied.

By examining cases where previously healthy people were hospitalized, then tracking the finances of those people in subsequent years, the researchers were able to study the issue in a way that delivers a solid link between cause and effect — namely, how often medical events themselves are the principal cause of changes in financial status.

Some of the previous research on the frequency of medically caused bankruptcies used survey data to produce estimates; one commonly cited figure is that 60 percent of bankruptcies have medical causes. However, those estimates used self-reported data about health issues, among those who filed for bankruptcy, without establishing that medical costs were the principal cause of those bankruptcies.

“The approach of the prior literature was just conceptually not right,” Finkelstein says.

The current study found that poor health has a larger impact on the uninsured than the insured: For instance, as a related, recently published paper by the research team shows, four years after being admitted to the hospital, people with insurance owe $300 more in unpaid medical bills, on average, while people without insurance have an average increase of $6,000 in unpaid medical bills.

The researchers also found that medically caused bankruptcies are minimal among the elderly — those over age 64 — who are likely to have Medicare and who tend to be retired, thus not suffering the earnings reductions that ill people in the workforce experience.

“We suspect what’s driving the [level of] bankruptcy we find is the fact that some people lose their job because of adverse health, and in turn that causes them to go bankrupt,” Finkelstein says. “That’s just not going to [apply to] the elderly, because they’re not working, so they don’t have the labor market risk from poor health.”

To be sure, Finkelstein acknowledges, the current study has some aspects that may need additional scrutiny. By focusing on examples involving hospitalization, the researchers could be missing some cases in which accumulated medical costs of other kinds drive people to bankruptcy — including medical costs incurred by children, parents, or other relatives.

“We’re not going to go to the mat over the idea that [the rate of medically caused bankruptcies] is always going to be 4 percent in every context and by every measurement,” Finkelstein says. Still, she notes, the accurate figure is likely to be much lower than other recent estimates imply.

To Finkelstein, the findings also have a clear upshot for policymakers and legislators. Grasping the full breadth of the economic consequences of poor health might affect the priorities of lawmakers, directing them to seek solutions for the lost income that many people endure after a serious medical event.

“Focusing on bankruptcy might lead you to think about bankruptcy protection reform,” Finkelstein says, “and while that may or may not be useful in its own right, if you’re interested in the economic consequences of poor health, you’re missing a main issue and potential policy responses — thinking about how we might want to structure sick pay and disability insurance.”

Some of the research data pertaining to job outcomes, covering the years 1992–2012 for nearly 10,000 people, was obtained from the Health and Retirement Study (HRS), a biannual U.S. national survey supported by the National Institute on Aging and the Social Security Administration, and directed by the University of Michigan.

Research led by Prof. Amy Finkelstein found that just 4% of “bankruptcy filings by non-elderly adults” were associated with medical expenses. “Medical bankruptcy…wasn’t nearly as common as anticipated,” writes Alex Kingsbury for The Boston Globe. “Public policy aimed at fighting it might not have the anticipated results, either.”

A study co-authored by researchers at MIT finds that hospitalizations only cause about 4 percent of bankruptcies among nonelderly adults in the U.S., reports Tom Murphy of the Associated Press. Researchers gathered data from “more than a half million adults under 65 in California who had a hospitalization between 2003 and 2007 that wasn't tied to childbirth.”