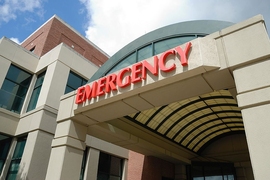 Adults who are covered by Medicaid use emergency rooms 40 percent more than those in similar circumstances who do not have health insurance, according to a unique new study, co-authored by an MIT economist, that sheds empirical light on the inner workings of health care in the U.S.

The study takes advantage of Oregon’s recent use of a lottery to assign access to Medicaid, the government-backed health-care plan for low-income Americans, to certain uninsured adults. The research examines emergency room records for roughly 25,000 people over 18 months.

“When you cover the uninsured, emergency room use goes up by a large magnitude,” says Amy Finkelstein, the Ford Professor of Economics at MIT and a principal investigator of the study, along with Katherine Baicker, a professor at the Harvard School of Public Health.

The study, which is being published today in the journal Science, also documents that having Medicaid consistently increases visits to the emergency room across a range of demographic groups, types of visits, and medical conditions, including types of conditions that may be most readily treatable in primary-care situations.

“In no case were we able to find any subpopulations, or type of conditions, for which Medicaid caused a significant decrease in emergency department use,” Finkelstein adds. “Although one always needs to be careful generalizing to other settings, these results suggest that other Medicaid expansions are unlikely to decrease emergency room use.”

The study is highly relevant to the current landscape in the U.S.: With the implementation of the Affordable Care Act, Medicaid is expanding in many states to cover a population similar to the one that gained Medicaid through Oregon’s lottery. The results in this paper, however, suggest nuances to the current debates over the expansion of Medicaid, medical costs, and the role of emergency rooms in providing care.

On one level, the results accord with a traditional economics framework suggesting that insurance, by lowering out-of-pocket costs, would increase the use of medical care. Or, as Finkelstein observes, “If we’ve lowered the price of the emergency department, we would expect people to use it more.”

However, Medicaid also lowers the out-of-pocket costs of other types of health care, such as primary-care doctors. Some policy analysts have suggested that expanding Medicaid could reduce emergency department visits by the formerly uninsured by bringing them into more regular contact with primary-care doctors and clinics for preventive care. In theory, that could also reduce overall system costs, since urgent care is expensive.

Indeed, prior work by Finkelstein, Baicker, and others on Oregon’s lottery applicants showed that people who obtain Medicaid increase their use of primary and preventive care. But as Finkelstein points out, the net effect of Medicaid in the study was to also increase use of emergency services.

Hypothetically, Finkelstein notes, the results “could have gone either way, which makes empirical work all the more important.”

Other scholars in the field say the study opens the way for further scrutiny of emergency room use. Amitabh Chandra, an economist and professor at the Harvard Kennedy School who has read the paper, praises the study as “exemplary social science,” and says the results underscore our need to learn more about the circumstances in which people use emergency rooms.

The study’s rigor derives from a unique policy the state of Oregon implemented in 2008. State officials, recognizing that they had Medicaid funds for about 10,000 additional low-income adults, developed a lottery to fill those slots, for which about 90,000 Oregonians applied.

From the viewpoint of academic researchers, the lottery system presented the opportunity for a randomized controlled evaluation of Medicaid, since it created a group of state residents obtaining Medicaid coverage who were otherwise similar, on aggregate, to the applicants who continued to lack coverage.

“It’s not that we’re the first to look at the effects of Medicaid empirically, but we are the very first to have a randomized controlled trial of the effect of covering the uninsured with Medicaid,” Finkelstein says.

In Oregon, uninsured adults are eligible for the lottery-based Medicaid program when their annual income falls below the federal poverty level established by the U.S. Department of Health and Human Services, which in 2013 is roughly $11,490 for a single person or $23,550 for a family of four.

In addition to Finkelstein and Baicker, the co-authors of the Science paper, titled “Medicaid Increases Emergency Department Use: Evidence from Oregon’s Health Insurance Experiment,” were lead author Sarah Taubman of the National Bureau of Economic Research, Heidi Allen of Columbia University’s School of Social Work, and Bill Wright of the Center for Outcomes Research and Education at Providence Health and Services in Portland, Ore.

It is the latest paper to emerge from an ongoing study, led by Finkelstein and Baicker, of the lottery applicants in Oregon’s Medicaid system. In a 2011 paper published in the Quarterly Journal of Economics, they showed that Medicaid coverage increases doctor visits, prescription drug use, and hospital admissions; reduces out-of-pocket expenses or unpaid medical debt; and increases self-reported good health. In a 2013 paper published in the New England Journal of Medicine, they showed that Medicaid coverage reduces the incidence of depression but does not produce measured improvements in physical health.

Finkelstein says she has been motivated by the Oregon study, and its reception, to create a new research group, J-PAL North America. Co-founded with Harvard economist Lawrence Katz, the group is meant to encourage randomized evaluations on policies and social issues in the U.S. It is the newest branch of MIT’s Abdul Latif Jameel Poverty Action Lab, which was founded in 2003 to support randomized trials in development economics globally.

“It’s relatively rare to have this kind of randomized controlled trial on a major [policy] issue,” Finkelstein says. “And I’d like that to become less the exception, and closer to the norm.”