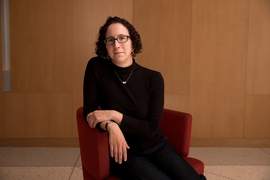 ↓ Download Image
Caption: “Contrary to the conjecture that Medicaid would get people to [move] out of the emergency room and to the primary care physician, we’re seeing a persistent increase in emergency room use,” says Amy Finkelstein, the John and Jennie S. MacDonald Professor of Economics at MIT.

Caption:
“Contrary to the conjecture that Medicaid would get people to [move] out of the emergency room and to the primary care physician, we’re seeing a persistent increase in emergency room use,” says Amy Finkelstein, the John and Jennie S. MacDonald Professor of Economics at MIT.

People enrolled in Medicaid significantly increase their emergency room visits for at least two years after they first sign up, according to a new study co-authored by an MIT economist. The finding will likely surprise those health care experts who have projected that people would make fewer ER visits after acquiring health insurance.

The finding is the latest one from a unique randomized, controlled trial of Oregon’s health care system. An earlier finding from the research project showed that ER visits initially increased after people enrolled in Medicaid. In response, some health care analysts predicted the number of ER visits would still attenuate with time, as Medicaid users became more fully immersed in the health care system and used primary care physicians more often.

Instead, the new study shows that ER visits, which increase by about 65 percent for Medicaid users in their first six months in the program, hold steady at roughly that rate for two solid years, not just the initial time period.

“Contrary to the conjecture that Medicaid would get people to [move] out of the emergency room and to the primary care physician, we’re seeing a persistent increase in emergency room use,” says Amy Finkelstein, the John and Jennie S. MacDonald Professor of Economics at MIT, who is a co-author of a new paper on the findings.

That’s not all the researchers found this time around, either: They estimate that having Medicaid leads to a 13.2 percentage point increase in the probability of someone making both an ER visit and a regular primary care visit, which is larger than the increase that would be expected if ER visits and primary care visits were being made independently of each other. This suggests increased use of these two forms of health care is linked.

“If anything, it’s looking like Medicaid makes these two types of care more complementary, not more substitutable,” Finkelstein says.

The finding has significant implications for understanding the effects of Medicaid coverage on the previously uninsured, during a time period when states have had the option of using federal funds to expand their Medicaid programs.

The paper, “The Effect of Medicaid on ED Use — Further Evidence from Oregon’s Experiment,” is being published today in the New England Journal of Medicine. (The ED in the title refers to “Emergency Department.”)

To construct their randomized, controlled trial, the first of its kind pertaining to Medicaid, the researchers have capitalized on a unique policy Oregon implemented in 2008. State officials at the time had Medicaid funds for about 10,000 additional adults and conducted a lottery for those places, receiving about 90,000 applications.

That lottery system let the researchers compare one group of Oregonians (those who had obtained Medicaid coverage via the lottery) to another otherwise similar group (namely, those who entered the Medicaid lottery but did not win).

“It’s the only randomized evaluation of covering the low-income uninsured in the United States,” Finkelstein notes.

Medicaid is the federal program that helps insure mostly low-income citizens, although eligibility requirements can vary by state. In Oregon, adults and children are usually eligible for Medicaid when their household income is no more than 133 percent of the federal poverty level established by the U.S. Department of Health and Human Services — which in 2016 was $11,880 for a single person and $24,300 for a family of four, in the 48 contiguous states.

Baicker and Finkelstein, who lead the research project, have published multiple papers on the subject over the last five years. In a 2011 paper published in the Quarterly Journal of Economics, they showed that Medicaid coverage increases doctor visits, prescription drug use, and hospital admissions, while reducing out-of-pocket expenses and unpaid medical debt. It also increases self-reported good health. In a 2013 paper published in the New England Journal of Medicine, they demonstrated that Medicaid coverage reduces the incidence of depression but does not change some physical health measures such as blood pressure.

Their previous finding on the initial use of ER services was published in 2014, in the journal Science.

Those published results have sometimes led pundits and political figures to make blanket judgments about the value of Medicaid as a whole. But Finkelstein says she prefers not to leap too far from the empirical results, which themselves give policymakers new data about health care usage rates.

“One always should exercise caution in extrapolating,” she says. Still, she notes, the findings on ER use apply “across the board, across types of people, types of care. … If we’re trying to make educated guesses, this would move my priors [prior assumptions] strongly toward [expecting] increases rather than decreases in emergency room use.”

The Oregon papers have had a wide impact in the health care policymaking community — and an institutional impact at MIT. Spurred on by the Oregon study and its reception, in 2013 Finkelstein co-founded the group J-PAL North America, along with Harvard economist Lawrence Katz, to encourage randomized evaluations of social policies designed to reduce poverty in the U.S.

The group is a branch of MIT’s Abdul Latif Jameel Poverty Action Lab, a network of 136 professors at over 40 universities that was founded in 2003 to support randomized trials in development economics globally.

It is not always possible to conduct randomized trials on social issues in every state-level setting, but they can have laboratory-like qualities when they are possible to conduct. Enrollment lotteries for social programs are one mechanism that potentially allows such trials to occur.

“A randomized, controlled evaluation gives you the ability to be surprised,” Finkelstein concludes.

Washington Post reporter Carolyn Johnson writes that a study by Prof. Amy Finkelstein finds that expanding Medicaid access increases emergency room visits. “People who gained Medicaid visited the emergency room about 65 percent more often than individuals who did not gain Medicaid in the first six months -- and the trend continued out to two years.”