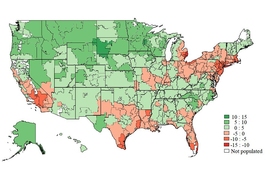 ↓ Download Image
Caption: A new study co-authored by MIT scholars shows regions of the U.S. where medical providers are most likely to offer tests and treatments, given populations with equivalent levels of underlying health. Areas with greater “diagnostic intensity,” as the researchers call it, are in red.

Caption:
A new study co-authored by MIT scholars shows regions of the U.S. where medical providers are most likely to offer tests and treatments, given populations with equivalent levels of underlying health. Areas with greater “diagnostic intensity,” as the researchers call it, are in red.

In some areas of the U.S., medical providers consistently order more tests and treatments for patients than providers do elsewhere — a fact that has generated considerable public debate. Now a new study co-authored by MIT scholars suggests that these differences in medical practices influence how the apparent health of populations is measured across regions.

Population health is typically measured according to medical claims data based on the diseases individuals are diagnosed with and treated for. But the study shows that, in practice, such measures reflect not only the underlying health of local populations, but also the propensity of providers to offer tests and treatments, a phenomenon the MIT researchers call “diagnostic intensity.”

This matters partly because standard insurance-based health metrics are used to adjust payments for insurers or providers to account for the apparent differences in the health of the patients they serve. But now, those standard metrics may need some revising.

“The idea of risk-adjusted payments is to create a level playing field so providers are not penalized for serving sicker or harder-to-treat patients, and insurers are not penalized for covering them,” says Amy Finkelstein, the John and Jennie S. MacDonald Professor of Economics at MIT and a co-author of a new paper outlining the study’s results. “But if risk adjustment is based on measures that reflect not only underlying patient health but also [a] provider’s ‘diagnostic intensity,’ that can be problematic.”

The paper, “Adjusting Risk Adjustment — Accounting for Variation in Diagnostic Intensity,” is being published this week in the New England Journal of Medicine. The authors are Finkelstein; Matthew Gentzkow, a professor of economics at Stanford University; Heidi Williams, an associate professor of economics at MIT; and Peter Hull, a doctoral candidate in MIT’s Department of Economics.

The current study covers all 306 hospital referral regions (HRRs) across the U.S. and builds on a previous analysis by Finkelstein, Gentzkow, and Williams, published last fall, which quantified how much variation in Medicare spending was due to regional medical practices, as opposed to the underlying health of patients.

That previous analysis showed that about half the regional difference in Medicare spending, nationwide, was due to medical practices, and about half was due to differences in population health.

That first analysis arrived at its conclusions by examining Medicare patients who moved from one region to another, in order to see how spending levels differ across regions, for the same patients.

In the newly published paper, the researchers again examine what happens when Medicare patients move across regions, focusing on how such moves affect people’s measured health. The researchers illustrate their approach by focusing on the “risk scores” used to reimburse private insurers in the federal government’s Medicare Advantage program. The risk score is designed to capture differences in patient health that affect Medicare spending. An enrolled person with a risk score of 1 would be expected to have an average level of Medicare spending; a risk score of 1.1 would suggest that the person’s spending would likely be about 10 percent above average.

The new study shows that when people move to areas of the country where providers have a greater diagnostic intensity, the risk scores of patients — which are supposed to reflect underlying health — increase.

And while the general problem of geographic variation in diagnostic intensity had been recognized by previous researchers, the new study for the first time devises a solution that could be applied to this problem in practice.

“This work develops a new measure [that] provides practitioners and researchers with place-specific measures of diagnostic intensity that can be used to correct that sort of bias in these measures,” Hull says. Medicare administrators, for instance, could use the new adjustments to more accurately determine the underlying health of regional populations.

The map that Finkelstein and her colleagues have built shows some notable national trends. Medical providers in the Northeast, the deep South, and most of California tend to diagnose their patients relatively aggressively. By contrast, providers in the Midwest and Mountain West, among other areas, are less aggressive in diagnosing patients.

But as the new study shows, Miami also happens to have a greater diagnostic intensity than Minneapolis. That implies the relative health measures of the two cities’ populations are closer than the raw spending data would suggest.

“Our findings suggest that people in Miami are less sick than you would think based on the standard risk adjustment measure, and people in Minneapolis are more sick than you would think,” Finkelstein observes, adding: “There’s been a lot of fascination with these geographic patterns.” And now, the new data about those patterns may have a direct practical application.