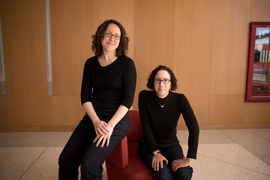 ↓ Download Image
Caption: (Left to right): Heidi Williams, the Class of 1957 Career Development Associate Professor in MIT’s Department of Economics; and Amy Finkelstein, the John and Jennie S. MacDonald Professor of Economics at MIT. By scrutinizing millions of Medicare patients who have moved from one place to another, the researchers have found that patients and providers account for virtually equal shares of the differences in regional spending.

Caption:
(Left to right): Heidi Williams, the Class of 1957 Career Development Associate Professor in MIT’s Department of Economics; and Amy Finkelstein, the John and Jennie S. MacDonald Professor of Economics at MIT. By scrutinizing millions of Medicare patients who have moved from one place to another, the researchers have found that patients and providers account for virtually equal shares of the differences in regional spending.

In Miami, health care providers spent about $14,423 per Medicare patient in 2010. But in Minneapolis, average spending on Medicare enrollees that year was $7,819, just over half as much. In fact, the U.S. is filled with regional disparities in medical spending. Why is this?

One explanation focuses on providers: In some regions, they may be more likely to use expensive tests or procedures. Another account focuses on patients: If the underlying health or the care preferences of regional populations varies enough, that may cause differences in spending. In recent years, public discussion of this issue has largely highlighted providers, with the implication that reducing apparently excessive treatments could trim overall health care costs.

But now a unique study co-authored by MIT economists provides a new answer to the medical cost mystery: By scrutinizing millions of Medicare patients who have moved from one place to another, the researchers have found that patients and providers account for virtually equal shares of the differences in regional spending.

“We find it is about 50/50, half due to patients and half due to places,” says Heidi Williams, the Class of 1957 Career Development Associate Professor in MIT’s Department of Economics, and a co-author of a new paper detailing the study’s findings.

Specifically, the study finds that nearly 50 percent of the spending differences across geographic areas stems from the characteristics of patients, meaning both their basic health and their varying preferences concerning the intensiveness of medical care. The rest of the spending differences derive from place-specific factors, potentially due to disparities in provider practices and incentives. The finding could help analysts and policymakers better understand the components of medical costs, and could add nuance to the debate about possible inefficiencies in health care spending.

After all, says co-author Amy Finkelstein, the John and Jennie S. MacDonald Professor of Economics at MIT, the study provides “evidence that there are real, place-specific differences in how health care is practiced. On the other hand … rather than just saying [that] place matters, we’re quantifying how important it is, and showing that a lot of the geographic variation is due to differences across patients.”

The paper, “Sources of Geographic Variation in Health Care: Evidence from Patient Migration,” appears in the November issue of the Quarterly Journal of Economics. The co-authors are Finkelstein, Williams, and Matthew Gentzkow, an economist at Stanford University.

To conduct the study, the scholars analyzed a sample of 2.5 million Medicare patients, and examined their health care usage from 1998 through 2008. The study focused on a subgroup of enrollees who did not move during this time, as well as 500,000 Medicare enrollees who moved from one market, or “Hospital Referral Region” (HRR), to another. The HRR concept was first developed by the Dartmouth Atlas of Health Care, a research project housed at Dartmouth College.

Essentially, by examining the health care usage patterns of the same people as they lived in different places, Finkelstein, Williams, and Gentzkow were able to develop a natural experiment to address the providers-or-patients issue.

Beyond their bottom-line result, the researchers unearthed several more specific findings. For instance, when it comes to emergency care, a relatively larger share of the regional spending discrepancy — 71 percent — was attributable to patients, who likely make more of the decisions about whether or not to seek care in those situations.

However, patients accounted for only 9 percent of the regional discrepancy for diagnostic tests and 14 percent of the discrepancy for imaging tests; in those cases, the variation by geographic region seems due to differing provider practices, with health care institutions in some places consistently spending more money on testing than other providers do elsewhere.

The researchers also found that when a Medicare enrollee moves and receives a different level of health care spending, most of that change occurs in the first year after the move.

Even given these more detailed findings, the researchers note that it is still difficult to assess which of the higher-spending or lower-spending regions have more “efficient” medical practices. In Williams’ view, an overly simplistic reading of the paper’s results would be that variation on the provider side reflects inefficiency, in the sense of some institutions providing suboptimal levels of care. She stresses that there may also be efficient geographic variation if providers in some areas are relatively more skilled at certain intensive procedures and provide more of those procedures.

“Just because there’s geographic variation on the provider side doesn’t mean that is necessarily inefficient,” Williams observes.

The scholars, who initiated the study in 2010, tried to account for potential complications concerning costs. For instance: Could more people with already-existing health problems be moving to warm, sunny, higher-spending places such as Miami, while leaving colder, lower-spending places like Minneapolis? That sort of migration could push Miami’s per-capita Medicare spending to a higher level.

But as the researchers discovered, such a pattern does not seem to exist. People moving to Arizona, California, and Florida accounted for 24 percent of all moves in the study; but the results are robust even when excluding those states from the tabulations.

State of the debate

Regional variation in health care spending has become a prominent issue over the last decade thanks in large part to the Dartmouth Atlas of Health Care.

“We are very much standing on the shoulders of giants,” Finkelstein says. “The people at Dartmouth, our colleagues in the economics department and the medical school there, have done an enormous amount of work and a huge service documenting and establishing the facts that have rightly gotten a lot of attention, of large differences [in health care spending] across a lot of geographic areas of the country.”

Some of the better-known Dartmouth findings have suggested that variations in regional spending were not leading to better or worse patient outcomes — although some studies in health care economics over the last decade have also found that more spending correlates with improved results for patients.

In the view of the MIT researchers, because some of the subsequent public discussion has emphasized questions about the practices of providers, they hope the new paper’s data about the role of patient characteristics can help inform the ongoing debate.

“The current consensus [has been] that almost all this variation was about providers, and that patient-specific health or preferences were unlikely to be important in explaining geographic variation in spending,” Williams says. “I think our paper shifts the weight of the evidence.”