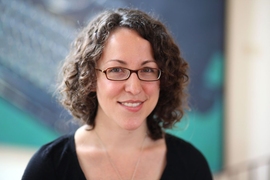 MIT economist Heidi Williams, whose scholarly work looks at the effects of patent policies and technology on medical research and health care, has been granted a 2015 MacArthur Fellowship.

The high-profile annual fellowships, unofficially known as “genius grants,” include an award of $625,000 that is paid over five years and is unrestricted, meaning recipients are allowed to use it as they see fit. There are usually fewer than 25 MacArthur Fellowships awarded each year.

Williams says she is “very humbled and extremely grateful” to be a recipient of the fellowship. Upon being informed of the award by an official with the MacArthur Foundation, she adds, “I was completely speechless.”

Williams, the Class of 1957 Assistant Professor in the Department of Economics, emphasized that the award was a reflection of the intellectual atmosphere and encouragement she has received from colleagues in her department.

“I’ve really been extremely grateful to my department here at MIT,” Williams says. “The department in general has just been so supportive.”

What affects the pace of medical research?

Williams says she aims to conduct “empirically-grounded, socially useful” research. In practice, she has produced methodologically rigorous studies on questions such as whether or not intellectual property rights influence the pace of biomedical research, and how the use of certain technologies affects health care outcomes and costs.

Williams’ best-known study, published in 2013, examined the effects of intellectual property rights within biomedical research — through the lens of the celebrated “race” to sequence a version of the human genome, between the private firm Celera and the government-backed Human Genome Project. Williams concluded that granting intellectual property rights to Celera for its discoveries reduced subsequent scientific research and product development by 20 to 30 percent, relative to the pace of research and development seen after the Human Genome Project’s later work put the same information in the public domain.

Another study published this summer, which Williams co-authored with Benjamin Roin of MIT and Eric Budish of the University of Chicago, found that pharmaceutical firms “underinvest” in drugs that would combat early-stage cancers, partly because the corresponding clinical trials for such cancers simply take longer than those for drugs treating patients with late-stage cancers — something that increases drug-development costs and provides drug manufacturers with less time to control patented drugs in the marketplace.

In evaluating the use of medical technologies, Williams and her co-authors found, in a 2010 study, that the extra treatment given to newborn babies who are just below a certain cutoff in birth weight actually enables those babies to have lower infant mortality rates than slightly bigger babies. That study helped quantify the value of additional treatment and spending in health care.

Currently, Williams is working on other studies, with multiple co-authors, that look at other aspects of infant mortality rates, as well as the value of breast cancer treatments.

Freedom for her research

Williams has tended to work on intensive, data-heavy research problems, which take a substantial amount of time to complete and turn into published papers. By her own account, her colleagues and PhD advisors have played a crucial role in encouraging her to pursue deep analyses of particular questions, instead of becoming too fixated on the simple quantity of her publications.

“I’ve had a lot of freedom, with the support of my department at MIT, and have been lucky to have fantastic mentors — my PhD advisors, my MIT colleagues, and other colleagues elsewhere — who said to me, ‘If you’re committed to work on these research questions, you should feel like you have the time and space to make investments in trying to answer them,’” Williams says.

Williams received her BA from Dartmouth College, her MS from Oxford University, and her PhD from Harvard University, in 2010. She joined the MIT faculty in 2011.

Prof. Heidi Williams speaks with Callie Crossley as part of WGBH’s “Genius Next Door” series, which features local winners of the MacArthur “genius grant.” Williams explains that her work focuses on “whether we're getting the right kinds of medical technologies developed.”

Prof. Heidi Williams, a 2015 MacArthur Fellow, speaks with Bloomberg’s John Tozzi about why drug companies are underinvesting in long-term research. Williams explains that there are “scientifically feasible projects that aren’t getting done because there aren’t sufficient incentives."

Prof. Heidi Williams has been named a 2015 MacArthur “Genius” award winner, according to the Associated Press. Williams was honored for her research exploring, “the causes and consequences of innovation in health care markets.”

Boston Globe reporter Kathleen Burge speaks with Prof. Heidi Williams, a 2015 MacArthur fellow, about how she felt upon learning she had been honored by the MacArthur Foundation and her research examining technological change in the health care market. “It’s quite overwhelming to hear this news and to get that vote of support,” said Williams.