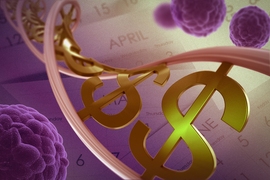 Pharmaceutical firms “underinvest” in long-term research to develop new cancer-fighting drugs due to the greater time and cost required to conduct such research, according to a newly published study co-authored by MIT economists.

Specifically, drugs to treat late-stage cancers are less costly to develop than drugs for earlier-stage cancers, partly because the late-stage drugs extend people’s lives for shorter durations of time. This means that the clinical trials for such drugs get wrapped up more quickly, too — and provide drug manufacturers more time to control patented drugs in the marketplace.

The social cost is significant: The researchers estimate that the lack of investment in longer-term drugs resulted in a loss of 890,000 life-years among people diagnosed with cancer in the year 2003 alone. The paper also suggests three policy adjustments that might produce more long-term research on anti-cancer drugs.

The finding “doesn’t mean that the private firms are doing anything wrong,” Williams adds, given the incentives they face. However, she observes, “The public sector is more willing to invest in these long-term projects than is the private sector,” suggesting that new policies could produce more types of drugs for patients.

The paper is co-authored by Williams, who is the Class of 1957 Career Development Assistant Professor in MIT’s Department of Economics; Eric Budish, an economist at the University of Chicago’s Booth School of Business; and Benjamin Roin, an assistant professor at the MIT Sloan School of Management.

To conduct the study, the researchers analyzed four decades of data from a variety of comprehensive sources, including the National Cancer Institute, which has a registry of clinical trials and data on cancer incidence and survival in the U.S., as well as data from the Food and Drug Administration (FDA), which approves anti-cancer drugs. In all, the study encompassed over 200 subcategories of cancers detected at different stages of development.

Before reaching their conclusions, however, the researchers had to establish that the tendency toward short-term drug research was due significantly to the shorter duration of clinical trials. They concluded this, in part, by studying what happens when clinical trials do not use mortality to establish effectiveness, but instead use “surrogate endpoints” — that is, biomarkers that stand as proxies for eventual outcomes and help estimate how effective the drugs will be.

By examining the historical data, Budish, Roin, and Williams found that in some cases where surrogate endpoints are allowed in cancer research clinical trials — including many types of leukemias — there were relatively more trials and money poured into research, other things being equal.

“When you have good surrogate endpoints, you see a dramatic increase in R&D investment, which means lives saved,” Roin says.

A second possible policy change is more public funding of research and development for anti-cancer drugs, since such funding is free of short-term, private-sector shareholder pressure to produce returns. There are only six cancer drugs in existence that are preventative in nature — and all six have been developed because of public funding, or relied on surrogate endpoints.

These first two points, are related, Williams emphasizes, noting, “No individual private firm wants to come in and provide all of the evidence that you need to validate a surrogate endpoint, because once one is validated, that’s going to be used by all of the firms on the market.”

A third potential new policy, suggest the researchers, would be changing the terms of drug patents, which typically run from the time of patent filing, to run from the time when the drug hits the market. That said, the FDA can currently grant exemptions that lengthen drug patents to account for the time R&D takes.

Roin, an expert in patent law and biomedical innovation, says future congressional changes to this policy are “extremely realistic, although it would take time.”

Other scholars who have read the paper say it makes a significant contribution in the economics of medical innovation.

“It's a persuasive and important paper,” says David Ridley, a health economist at Duke University’s Fuqua School of Business. The researchers, he thinks, have “carefully demonstrated how these incentives drive drug discovery. They were able to explain why some types of cancer receive more attention than others. The results are relevant beyond cancer, though. Consider hormone therapies: Before approving these hormone therapies, the FDA wants years of data to demonstrate that they are safe in long-term use. But years of data are expensive because of the time value of money, and because the patent clock is ticking.”

In the larger picture, Ridley adds, “It’s worthwhile to ask whether a ‘one-size-fits-all’ patent policy is optimal.”

Williams emphasizes that, as economists, she and her colleagues are only advocating the use of surrogate endpoints where they have been accepted by the consensus within mainstream medicine. As it happens, surrogate endpoints have been validated and used regarding heart disease through the Framingham Heart Study, a major, multidecade project, although their incorporation into cancer research has been more gradual.

“We’re not attempting to be doctors,” Williams says.

In an article for The New York Times, Austin Frakt speaks with Prof. Benjamin Roin about how to encourage drug companies to undertake studies examining whether medications may have multiple uses. Roin suggests that to make such studies feasible, there could be a “universal electronic prescribing system that tracks prescriptions and conditions for which they’re intended.”

In an interview with the BBC, Prof. Heidi Williams argues that there should be more incentives for developing cancer prevention techniques and treatments for early-stage cancers. "If you look at drugs that get approved by the FDA, they all tend to be for very late stage cancer patients,” says Williams.

In an article for The New York Times about the impact of patent laws on drug development, Austin Frakt highlights Prof. Benjamin Roin’s research that indicates pharmaceutical companies reject unpatentable drugs. To counter this problem, Frakt explains that Roin suggests “a period of market exclusivity…to any organization addressing an unmet medical need with a drug that isn’t patentable.”

Study: Prices of cancer drugs have soared since 1995