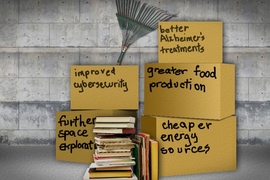 Last year was a notable one for scientific achievements: In 2014, European researchers discovered a fundamental new particle that sheds light on the origins of the universe, and the European Space Agency successfully landed the first spacecraft on a comet. Chinese researchers, meanwhile, developed the world’s fastest supercomputer, and uncovered new ways to meet global food demand.

But as these competitors increase their investment in basic research, the percentage of the U.S. federal budget devoted to research and development has fallen from around 10 percent in 1968 to less than 4 percent in 2015.

Today MIT released a report in which faculty and other researchers detail specific impacts, within their fields, of this declining federal investment in basic research. The report — “The Future Postponed: Why Declining Investment in Basic Research Threatens a U.S. Innovation Deficit” — was prepared by a committee of MIT researchers and research administrators. Examining how funding cutbacks will affect the future of scientific studies in the U.S., the report highlights opportunities in basic research that could help shape and maintain U.S. economic power, and benefit society.

Marc Kastner, the Donner Professor of Physics at MIT and president of the Science Philanthropy Alliance, says that the report looks at challenges facing the U.S. and the world in a variety of fields — from cybersecurity and robotics to plant biology and infectious diseases — and details the potential benefits, in each, of increased U.S. federal government support for basic research.

“Although the benefit of any particular scientific endeavor is unpredictable, there is no doubt that investing in basic research has always paid off over time,” Kastner says. “Economists tell us that past investments in research and development account for a large fraction of our current GDP, and even if the future payoffs are not as large, there is no doubt that we will suffer if we do not keep up with those nations that are now making bigger investments than we are.”

In “The Future Postponed,” MIT researchers discuss 15 discrete areas in which government support is needed, highlighting potential opportunities within these fields. For example, the report cites the need to expand research in neurobiology, brain chemistry, and the science of aging to develop new treatments for Alzheimer’s disease.

“The comparison between Alzheimer’s disease and cancer is sobering,” explains Andrew Lo, the Charles E. and Susan T. Harris Professor at the MIT Sloan School of Management. “Between January 2012 and March 2015, the [Food and Drug Administration] approved 27 new cancer drugs, two of which target breast cancer, an affliction that affects 2.9 million women in the U.S. In contrast, no new Alzheimer's drugs have been approved in more than a decade, despite the fact that more than 5 million Americans suffer from this disease.”

Chris Kaiser, the Amgen Professor in MIT’s Department of Biology, highlights the importance of expanding university-based research into new types of antibiotics to tackle the growing health threat posed by antibiotic-resistant bacteria — an area where commercial incentives to invest are lacking. He also notes that funding is needed to investigate the molecular mechanisms and structure of specific viruses in order to develop effective vaccines and drugs to prepare for future viral epidemics.

Ron Weiss, an associate professor of biological engineering and electrical engineering and computer science at MIT, and research associate Jonathan Babb argue that synthetic biology research could lead to customized treatments for genetic diseases, engineered viruses that can identify and kill cancer cells, or climate-friendly fuels — but a lack of investment in laboratory facilities is leading to a migration of top talent and research leadership overseas.

The report’s authors also cite expectations that global population will grow from 7 billion to 9 billion by 2040, while a lack of arable land will necessitate a 50 percent increase in the efficiency of food production. While innovations in plant science will be necessary to meet global food requirements and address malnutrition, Mary Gehring, an assistant professor of biology at MIT, writes that U.S. investment in basic plant-related research and development is far below that of many other scientific disciplines, despite the fact that agriculture is responsible for more than 2 million U.S. jobs, and is a major source of export earnings.

Another case study examines cyberattacks, which Howard Shrobe, a principal research scientist at MIT’s Computer Science and Artificial Intelligence Lab (CSAIL), explains are not only a nuisance, but also pose a threat to national security. Shrobe notes that investment is needed to support the redesign of computer systems to eliminate major security weakness in areas such as computer architecture and access authorization.

Additionally, the report’s authors emphasize that the U.S. has an opportunity to take a global leadership role in areas including fusion energy research, robotics, and quantum information technologies.

Kastner explains the importance of supporting basic research by noting that such research endeavors often bring about unexpected, life-changing results — as in the case of the basic research in science and math that led to the development of magnetic resonance imaging, or MRI: “With complete unpredictability, basic science research sometimes gives us a gift of new technology that changes our world,” he says.

Rohan Banerjee writes for The Tech about a new MIT report that examines 15 areas of research that would benefit from increased government support. Prof. Marc Kastner explains that the report is aimed at informing political leaders of the importance of basic research. “It’s important to remind Congress and the public that the health of the country depends on doing research,” he says.

The Boston Herald highlights a new MIT report that examines how decreased government funding for basic research is holding back advances in 15 fields. Science funding is “the lowest it has been since the Second World War as a fraction of the federal budget,” explains Professor Marc Kastner.

A new MIT report finds that declining government investment in basic research could be driving top academic talent overseas, writes RobertMcMillan of The Wall Street Journal. “We are undercutting ourselves by not supporting basic science,” says Prof. Andrew Lo.

Inside Higher Ed highlights a new report prepared by a committee of MIT researchers that examines the need for increased federal funding for basic research. The report “examines the lost opportunities for science and for U.S. competitiveness vs. other nations due to inadequate federal support for basic research.”

Salon reporter Joanna Rothkopf writes that a report prepared by MIT researchers finds that declining government investment in basic research is creating an innovation deficit. “The report warns that the lack of adequate funding for sciences in the U.S. is threatening 15 fields, including neurobiology, cybersecurity, infectious diseases and robotics,” Rothkopf writes.

Craig Lemoult of WGBH News speaks with MIT researchers about a new report examining the impacts of declining government support for basic research. Prof. Marc Kastner notes that many of the “technologies that have made our lives better” stem from basic research advances.

Discovery science is reinventing the world