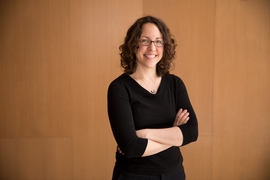 ↓ Download Image
Caption: “MIT is wonderful because in addition to [finding] an amazing home in economics, I can talk with and learn from a lot of people on the science side,” says Heidi Williams, the Class of 1957 Career Development Associate Professor in MIT’s Department of Economics. 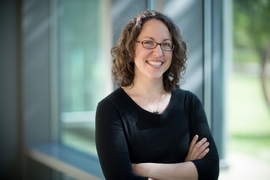 ↓ Download Image
Caption: “MIT is wonderful because in addition to [finding] an amazing home in economics, I can talk with and learn from a lot of people on the science side,” says Heidi Williams, the Class of 1957 Career Development Associate Professor in MIT’s Department of Economics.

Caption:
“MIT is wonderful because in addition to [finding] an amazing home in economics, I can talk with and learn from a lot of people on the science side,” says Heidi Williams, the Class of 1957 Career Development Associate Professor in MIT’s Department of Economics.

When Heidi Williams was in the fifth grade, she wanted to become an industrial organizational psychologist. That could have been an interesting career. Later, when Williams was in college, she wanted to become a cryptologist, and even completed an internship at the National Security Agency. That also could have been an interesting career. But Williams did not stick with either one.

“You have to be honest with yourself about what you’re most excited about,” says Williams. “As a researcher, you want to find a set of questions that you really want to answer. That’s not an automatic ticket to success in life, but I think it’s a necessary precondition for being motivated to get up in the morning and being excited to work.”

Instead, Williams is now the Class of 1957 Career Development Associate Professor in MIT’s Department of Economics, and what motivates her to get up in the morning is a set of questions about innovation, medical research, and health care. Do gene patents restrict or enhance medical advances? What is the effect of patent law on cancer research? To what extent does the use of medical technology drive health care cost growth?

Since she was a graduate student, Williams has kept a list of research questions that intrigue her, and she has developed a distinctive method of trying to answer them. For each new study, she essentially builds an all-new data set from the ground up, linking scientific records about medical research with economic and financial records.

“That linkage is what I find most exciting,” says Williams. “MIT is wonderful because in addition to [finding] an amazing home in economics, I can talk with and learn from a lot of people on the science side.”

Working this way takes time, and many junior faculty, under pressure to publish frequent research papers, might shy away from this approach. But Williams’ efforts have paid off, and in a short time she has had a significant impact on her field. In 2015, Williams was awarded a MacArthur fellowship — the so-called “genius grant” — to further her research. And this spring, she was granted tenure at MIT, just five years after joining the Institute as an assistant professor.

Williams grew up in Williston, North Dakota, a town near the Montana border that had about 12,000 people in it when she lived there. (It has roughly doubled in size since then due to the oil-drilling boom.)

“It’s small, but it is relatively a big city for North Dakota,” Williams offers.

Her mother, who was a social worker, and her father, who was an eye doctor, were “just amazing, always very supportive of [the idea that] I should do whatever I want to do,” Williams adds.

Williams’ education took a decisive turn when, as a high school student, she submitted an entry to a college-level competition for cryptology papers. After some time passed and the results were not announced, Williams contacted the contest’s director, Brian Winkel, now an emeritus math professor at the United States Military Academy at West Point.

“I would never do that today,” she says. But although she didn’t know it, Williams had been judged winner of the contest, and her paper — suggesting improvements to a method of decoding text sent by Enigma machines, the German message-sending devices that the British cracked during World War II — would be published in the journal Cryptologia. Winkel, far from being miffed, took an interest in Williams’ future. He suggested she apply to Dartmouth and consider working with a math professor there named Dorothy Wallace.

As it happens, Williams was considering applying to Dartmouth anyway, because, apparently weary of the bright lights of Williston, “I already had my heart set on moving to a small town for college,” she says.

Williams was accepted to Dartmouth, attended, and as a math major, worked with Wallace. As is so often the case with students, direct mentoring made a big difference to Williams.

“She was, as promised, just a fantastic advisor,” Williams says, about Wallace. “My life would have been really different if Brian and Dorothy hadn’t gone out of their way to mentor me at that stage.”

Williams did seriously consider entering the field of cryptography and calls her NSA internship “extremely interesting work.” But she was looking for some way to apply her quantitative background more directly to social issues. She received a master’s degree in economics from Oxford University and entered Harvard University’s PhD program in economics.

The genome wars and more

Williams documented evidence that Celera’s intellectual property rights reduced subsequent scientific research and product development by 20 to 30 percent, compared to the sequenced genes the Human Genome Project placed in the public domain. However, Williams also thinks the issue is “a lot more nuanced” than that one statistic might imply, since Celera did not have outright patents on its sequenced genes and instead developed an alternative, contract-based form of intellectual property rights when the firm wasn’t granted gene patents.

“This … alternative form of intellectual property that Celera used seems to have discouraged scientific researchers,” Williams notes, adding that her results from this study together with a subsequent research paper suggest that both Celera and society might “have been better off if we’d just granted Celera its patents in the first place.”

Williams joined MIT in 2011 and has since published additional large-scale findings on medical innovation and health care. In a 2015 paper, Williams and two co-authors published evidence that pharmaceutical firms “underinvest” in drugs to fight early-stage cancers, partly because clinical trials for those drugs take longer and cost more to develop than the clinical trials for drugs treating late-stage cancers — and leave firms with less time to control patented drug therapies on the market.

“It’s amazing. Patents are incredibly controversial, and we really don’t have rigorous studies to point to that quantify the potential benefits of patents in terms of spurred research investments, or whether those benefits justify the costs that patents impose on society,” Williams says. “And I’m excited to continue to work on trying to generate empirical evidence to inform that question.”

Some of her other research tracks the economics of medical care, including breast cancer therapies and infant mortality prevention. And later this fall, Williams, Finkelstein, and another co-author will also publish a paper on a big-time topic in health care research: whether the regional variation in U.S. health care spending comes from entrenched medical practices or from the varying degrees of sickness in the local populations. (The short answer: a bit of both.)

Williams is quick to credit her MIT faculty colleagues — including Finkelstein, David Autor, James Poterba, and Scott Stern — with helping her make the transition to faculty life at the Institute. She calls them “phenomenal role models,” adding, “I have been so incredibly appreciative of their support.”

As a rising star, Williams has plenty of options in choosing her future research directions. Intriguingly, she is considering undertaking studies on the effects of patents in multiple industries, not just in health care. But whatever intellectual direction Williams moves in, her method will likely remain the same: careful construction of unique data sets on big topics.

“It is usually the case that not every part of a paper is perfect in terms of your ability to learn something from it,” Williams says. “But in the long run, making large investments in constructing new data, and working on a body of several papers in a given area, seems like a useful approach. I’ve been very lucky at MIT to feel like I have the time I’ve needed need to work on the best possible versions of the research projects that I’m most excited to pursue.”