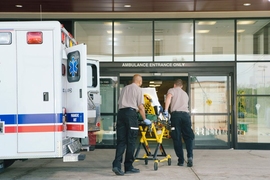 Because Americans spend more per capita on health care than residents of any country, debate has rumbled on for years about whether all that investment yields sufficient results. Now a newly published study with a distinctive design, led by an MIT health care scholar, shows that increased spending on emergency care does, in fact, produce better outcomes for patients.

Analyzing patients covered by Medicare, the study finds that increasing emergency-care spending by one standard deviation about the mean generates roughly a 10 percent (and 4 percentage point) reduction in mortality.

The study assessed ambulance-dispatch patterns in New York state, over a period of several years, to examine how otherwise similar groups of patients fare when given varying levels of treatment; different hospitals tend to provide different levels of treatment, and thus expenses, in emergency care.

To those unfamiliar with health care policy debates, the finding might seem predictable: You get what you pay for. But in recent years, some frequently cited studies have suggested that higher spending levels do not necessarily produce better results. Doyle, however, contends that this notion does not hold, at least when applied to emergency care.

“People have concluded from previous research that there must be huge waste in the [medical] system,” says Doyle, the Erwin H. Schell Professor at the MIT Sloan School of Management. “At a bare minimum, our research suggests more caution in that interpretation.”

The paper, “Measuring Returns to Hospital Care: Evidence from Ambulance Referral Patterns,” is published in the Journal of Political Economy.

The authors are Doyle; John Graves, an assistant professor of health policy at the Vanderbilt University School of Medicine; Jonathan Gruber, the Ford Professor of Economics at MIT; and Samuel Kleiner, an economist at Cornell University.

The researchers used a pair of existing circumstances to conduct a study in which similar groups of people experienced different intensities of care. In some areas of New York state, multiple ambulance companies serve the same geographic areas, but tend to deliver patients to different hospitals. In other areas, the researchers examined what happens when similar patients located just on opposite sides of emergency-dispatch boundary lines wound up in different types of hospitals.

The study examined patients with 29 types of serious conditions in 40 communities, and used Medicare billing data to see what medical services were provided to them.

Studying these mechanisms provided the researchers with “a source of variation that we think is effectively random,” says Doyle, adding that it represents “hopefully a better apples-to-apples comparison” of patients than prior studies that did not try to control for differences in which kinds of patients visit which hospitals.

Other experts in the field believe the findings are a significant addition to the literature on the topic.

“It provides an important countervailing voice in the debate about whether we are experiencing flat-of-the-curve results” — less payoff for additional spending — in medicine, says Leemore Dafny, a professor at Northwestern University’s Kellogg School of Management who has studied hospital care and health management. Dafny also describes the study’s structure as a “beautiful natural experiment.”

Health care spending is equal to about 18 percent of U.S. gross domestic product, and Doyle refrains from asserting that there is no wasted spending in the entire industry. Part of his current research, he notes, concerns returns on spending in areas other than emergency care, to see if higher expenses produce better outcomes regarding, say, chronic conditions. But for now, Doyle notes, an increasing body of evidence shows that emergency care is not riddled with excessive spending.

“If we’re trying to find out where the waste is, our research suggests it’s not in emergency care,” Doyle says.

The research project received funding from the National Institutes of Health.