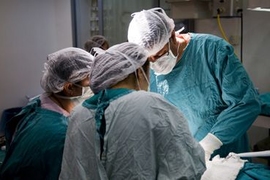 When someone is rushed to an emergency room with heart problems, does it matter how much money the hospital spends on that patient?

Intuitively, it may seem logical that high-end medical care would lead to better results for patients. But economists and policy specialists have debated the question extensively, and uncovering a clear answer has proven difficult.

Now an innovative new study by MIT economist Joseph Doyle shows that hospitals that spend more money to treat people who enter their emergency rooms are indeed successful in lowering the mortality rates of those patients.

"More intensive and expensive treatment leads to better outcomes," says Doyle, the Alfred Henry (1929) and Jean Morrison Hayes Career Development Associate Professor of Applied Economics at the MIT Sloan School of Management, whose study examines tens of thousands of cases in which out-of-state visitors were admitted to emergency rooms in the state of Florida over a span of several years.

Among other findings, Doyle discovered that an increase of about $4,000 per patient in hospital expenditures led to a 1.4 percentage-point decrease in the mortality rate.

The results are featured in a new paper by Doyle published in the July issue of the American Economic Journal: Applied Economics.

An IOU to the ICU

Uncertainty over the effectiveness of medical spending stems in large part from the fact that health care providers in some regions of the United States spend considerably more on their patients than providers in other regions do, yet some studies have shown that patients in higher-spending areas do not necessarily have a lower mortality rate than those in lower-spending areas.

But other economists have found data suggesting that additional spending does make a difference; hospitals that spend more money while producing similar outcomes may simply have sicker patients to deal with.

Doyle found an innovative way of studying the problem by looking at emergency-room visits of people visiting Florida, an approach that greatly reduces the impact of local patient variation on medical spending.

The study examined nearly 37,000 hospitalizations from 1996 to 2003, using patient-discharge data available through the Florida Agency for Healthcare Administration, a governmental agency. Doyle analyzed the patient data by ZIP code, age and even seasonality of visit to make sure that he was studying demographically similar tourists being treated throughout Florida.

Moreover, Doyle notes, Florida has significant "variation in how areas treat patients after heart attacks. Florida looks like a microcosm of the U.S., with high-spending and low-spending areas. And the per-capita income of an area is not correlated very well with [hospital] spending." In Fort Lauderdale, for example, hospitals spend 30 percent more on heart patients than they do in nearby, affluent West Palm Beach.

Therefore, the variation in results that Doyle found does not stem from the prior health of patients, but from the level of care itself. Specifically, the greater expenses — and benefits — in heart treatment seem to come from a broader application of intensive-care-unit (ICU) tools and having more medical personnel on hand. "The higher-spending hospitals use more ICU services, and they have higher staff-to-patient ratios, so they use more labor," Doyle says. "And that's expensive."

Overall, a 50 percent increase in what Doyle calls a hospital's "spending intensity" allows it to reduce mortality rates due to heart problems to about 26 percent below the mean.

Other economists see the paper as an important addition to the literature on health care costs and outcomes. "I found it to be a very creative, careful study that addresses a very important health-policy question," says Robert Kaestner, an economist at the University of Illinois at Chicago. "It's reasonable to believe that the difference in outcomes he finds is not because the visitors systematically differ in terms of where they visit or get care. It's a very plausible finding, showing how more spending and use of resources is related to lower mortality."

For his part, Doyle readily admits that identifying the precise medical technologies that provide the greatest additional benefit per dollar spent remains a work in progress — and will require ongoing analysis as new technologies are introduced.

Currently, Doyle is working on another study examining what happens when similar groups of patients are sent to diverse sets of hospitals, using data from ambulance services that deliver people to emergency rooms nationwide. He is presenting a version of that paper at a conference hosted by the National Bureau of Economic Research this summer.