Mircea Dincă: Searching for materials that collect and store energy 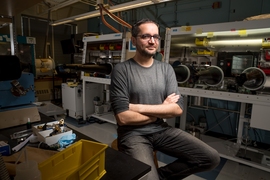 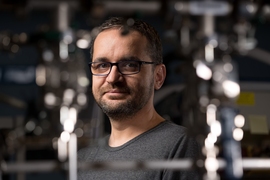 Growing up in Romania, Mircea Dincă became fascinated with chemistry at an early age, and by the time he was in high school he was a regular participant — and prizewinner — in chemistry Olympiads there. Those early activities helped him earn a full scholarship to Princeton University, where that interest really took root.

“I got my first taste of chemistry in grade school, and I had six years of chemistry before college,” he recalls. By the age of 15, he had devoured a large tome on general chemistry, and then proceeded to learn as much as he could about all of the natural elements.

When he got to Princeton, he worked with chemistry professor Jeffrey Schwartz, who was “probably the one who had the most influence” on his early career path, says Dincă (pronounced “DINK-uh”), adding, “He had a cynical sense of humor that I enjoyed.” While Dincă had originally set out to work on organic chemistry, Schwartz, who specializes in the interfaces between different materials, “very quietly pushed me more toward materials chemistry.” In the end, “he turned me into a materials chemist,” Dincă says.

After earning his undergraduate degree at Princeton, Dincă moved on to the University of California at Berkeley for his doctoral research, where he worked with chemistry professor Jeffrey Long. “I picked this lab where they were working on fairly new materials,” including unusually porous materials called metal-organic frameworks (MOFs), which were quite new at the time, he says. “I was really interested in working on some materials research that had some environmental impact.”

Ten years ago, that impulse drew him to MIT, where he worked with then-MIT professor Daniel Nocera on developing materials to create an “artificial leaf” as a means to capture solar energy and store it in chemical form so it could be used whenever needed. The proof-of-concept device used the power of sunlight to split water into hydrogen and oxygen, which could be used, for example, to power a fuel-cell car.

From then on, he says, “I stayed in this realm of environmental and energy research.” And, after Nocera moved from MIT to Harvard University, Dincă actually ended up in Nocera’s old office. Working with Nocera, he says, “I didn’t do anything with MOFs, but I learned a lot about the physical properties, the electronic structure of materials.” And in the process, he says, “I realized that there were very few people who were thinking deeply about the electronic structure of MOFs.” Yet those compounds, he was confident, “could lead to interesting materials that people weren’t really looking at.”

He began exploring these exotic materials, which combine in one material the two fundamental types of chemistry: organic chemistry, which involves all compounds that include carbon and form the basis of all biological processes; and inorganic chemistry, which deals with everything else (and mostly with metals, which dominate the periodic table, and their compounds and alloys).

In his explorations of MOFs, he studied ways of making the materials fluorescent, so that they could, for example, detect certain molecules and signal their presence by emitting fluorescent light. He also studied ways of using MOFs as catalysts for very specific kinds of chemical reactions. “All of that came about through a combination of what I had learned about MOFs in grad school, and what I learned in Dan’s lab,” he says.

While MOFs were initially discovered about 20 years ago, he says, they rose to the prominence they enjoy today as a result of the realization that these compounds could be made to be extremely porous, with extraordinarily high surface areas in relation to their size. “That’s what propelled them to the prominence they have today. Now, it’s a huge field,” he says.

Among other projects, Dincă and his students found a way to make MOFs, which are usually electrical insulators, into electrical conductors, which enabled them to use the large surface area of these materials to create a new kind of supercapacitors for energy storage.

His decision to come to MIT a decade ago, he recalls, came at a time when “I had a number of different opportunities. In the end, it came down to the people.” Though he had more lucrative offers elsewhere, he chose MIT “not for the money, not for the weather. It’s the students you get. I’ve been to many other places, and I haven’t seen the quality of students that we have here. It’s just the people — and that includes the colleagues.” Last year, he earned tenure as an associate professor of chemistry.

Dincă became a U.S. citizen early this year. He and his wife, Alexandra, who is also from Romania, met while they were both students at Princeton. She is now a lawyer, and they have two children, Amalia and Gruia. His father, a Romanian Orthodox priest, and his mother, a kindergarten teacher, are retired and still live in Romania.

When he is not in the lab or the classroom, he says, “I try to be in nature as much as I can, like hiking up a mountain in the woods.” When his work involves travel, “I like to mix travel with some sightseeing.”

His research continues to expand but remains mostly focused on highly porous materials such as MOFs, though he has recently forayed into research related to one-dimensional materials, a project that is just getting underway.

“I’ve always been driven by a desire to make things,” Dincă says. He follows that approach in his teaching as well. In his classes, he sometimes grades half of the assignments but leaves the other half open and ungraded to encourage exploration. “I’m just grateful for all the students that I have, and have had,” he says. “Everything that I’ve achieved so far is due to them.”

New kind of supercapacitor made without carbon