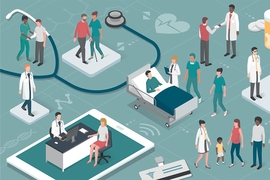 Caption:
A team member from Kinematics delivers a pitch for smart shoe insoles that use sensors and real-time data to enable faster and more comprehensive gait analysis for physical therapists.
Credits:
Courtesy of the MIT Sloan Healthcare and BioInnovations Conference

A team from a Harvard Medical School affiliate saw its way clearly to victory at last night’s MIT Sloan Healthcare Innovation Prize competition, with contact lenses that deliver medications directly to the eye over days or weeks.

For its novel invention, Theraoptix took home the annual competition’s $25,000 grand prize, sponsored by health services firm Optum. In total, eight finalist teams pitched health care innovations to a panel of expert judges, from Optum and several local venture firms, and a capacity audience at the MIT Wong Auditorium in the Tang Center.

Winning a second-place prize of $2,000 was Strand Therapeutics, which is developing mRNA-based cancer-fighting drugs. A $500 audience-choice prize was awarded to Healthcare Hospitality Systems, developing directional sound systems for hospital rooms.

Made from FDA-approved materials, Theraoptix’s contact lenses deliver eye medication in a controlled, sustained release. Sandwiched between contact lens material is a drug-filled polymer film, formed into a tiny circular strip that doesn’t interfere with the wearer’s vision. The sandwiching structure causes the drugs to slowly seep from the film into the eye.

The lenses can be worn all day for up to two weeks to treat, say, glaucoma or to aid in healing after surgery. Eye drops are the traditional treatment method, but they can be ineffective, as the liquid drips out of the eye or patients may stop treatment. Moreover, the lenses can effectively deliver drugs to the back of the eye to treat macular degeneration, diabetic retinopathy, retinal vein occlusion, and other diseases that today require in-office injections.

“No eye drops, no injections — just one lens,” said team member Lokendra Bengani, a postdoc at Schepens Eye Research Institute of the Massachusetts Eye and Ear Infirmary, during the team’s winning pitch.

Theraoptix’s aim is primarily to improve patient compliance, Bengani told MIT News after the competition. Glaucoma, for instance, is the leading cause of blindness in the U.S. “Yet six months into therapy, patients will stop taking medications. They have to take about four drops per day, so they stop,” he said. “We’re hoping this lens can help them comply without having to do anything else.”

Most of the prize money will go toward research and development. Surprisingly, Bengani told MIT News, Theraoptix came into the competition not expecting to win anything at all. “Honestly, we just came for feedback from the judges,” he said, laughing. “But this will definitely help.”

Theraoptix’s core technology was developed nearly a decade ago in the lab of Daniel Kohane (now at Boston Children’s Hospital), located at David H. Koch Institute Professor Robert Langer's lab at MIT, by ophthalmologist Joseph B. Ciolino, Bengani’s mentor at the Massachusetts Eye and Ear Infirmary.

Second-place winner Strand Therapeutics is developing a therapeutic that combines engineered mRNA, which relays messages for cells to create proteins, with certain immunotherapies, which trigger the body’s immune response to fight cancer. The idea is the mRNA will help cells produce target cancer-killing proteins during immunotherapy.

In the team’s pitch, Jacob Becraft, an MIT PhD student in biological engineering, showed preclinical trial results of the combined therapeutic, which extended survival rates of cancer patients by a couple months compared to immunotherapy alone. Additionally, mRNA-based therapeutics are safe, easy to deliver, and relatively cheap to produce, according to the team. “With Strand Therapeutics, we believe there is finally a market opportunity to cure cancer,” Becraft said.

Audience-choice winner, Healthcare Hospitality Systems, from MIT, is developing an audio device that points a slim “beam” of sound at a listener. Outside of that beam, however, the sound is no louder than a whisper. In a demonstration, one team member faced a ceiling tile equipped with the device directly at the audience. Music playing through the device was clearly audible. But when the tile was flipped horizontally, facing the floor, the room went silent.

The device can be installed in square ceiling panels above hospital beds, and connect wirelessly to a television, so patients can watch television without disturbing others. University of Rochester Medical Center in New York, Vanderbilt University Medical Center in Tennessee, and Winchester Hospital in Massachusetts have already started piloting the device. (The device is a modified version of the Audio Spotlight, developed by Joseph Pompei PhD ’02 at the Media Lab and commercialized through his company Holosonics.)

Other competing teams were: Iterative Scopes, developing computer vision algorithms that aid in detecting lesions that may signal colorectal cancer during colonoscopies; SurgiBox, developing a clear enclosure that sits on top of a surgery patient, creating a portable sterile environment; Umbulizer, developing a low-cost, portable device that provides continuous ventilation in the developing world; Kinematics, developing smart shoe insoles that use sensors and real-time data to enable faster and more comprehensive gait analysis for physical therapists; and O2Map, developing an implantable sensor that can monitor oxygen in tumors, because low-oxygen tumors can become resistant to radiotherapy.

The competition was organized by the student-run MIT Sloan Healthcare Club and was held as part of the 16th annual MIT Sloan Healthcare and BioInnovations Conference, themed “Pathways to Innovation in Healthcare.” The conference, held today in the MIT Media Lab, brings together industry, academic, investment, and policy leaders from the health care industry to listen to keynotes and panel discussions on today’s pressing issues and innovations. There are also two hands-on workshops, hosted by MIT Hacking Medicine and by Solve.

Dozens of teams apply each year to the competition, while only eight are selected to pitch in the final pitch competition. Weeks before the competition, finalist teams are offered mentorship, networking opportunities, and a one-day workshop on developing business pitches. The competition consisted of two semifinal rounds, where judges provide further coaching. Criteria for choosing competing teams included determining the novelty of the invention, its technical feasibility, any hurdles in governmental and other regulations, and whether the team has acquired customers or made its first sale. Teams must have at least one representative from MIT or Harvard University.

The conference's aim was to highlight the many paths to innovation in health care, conference co-chair Ben Linville-Engler, a fellow in MIT's System Design and Management program, told MIT News.

"SHIP provides student-run startups the opportunity to gain important exposure in order to recruit team members and advisers, identify new partnerships, and find resources to help them move their companies forward," he said. "These startups are focused on tackling some of today’s most challenging problems in health care, and MIT is well-positioned as a global technology and business thought leader and is located in one of — if not the — largest health care innovation ecosystems in the world."

Keynote speaker was Alexandra Drane, a serial entrepreneur who co-founded several health care startups and nonprofits in the region and beyond, including Archangels, Engage with Grace, and Eliza Corporation. Kyle Rand of last year’s winning team, Rendever, which is developing a virtual reality platform for the elderly, was on hand to deliver a talk that focused on the ups and downs of running a health care startup.