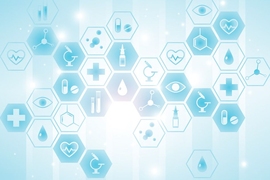 Virtual reality is quickly gaining steam in the gaming industry. But an MIT startup is now aiming the technology at a different demographic, putting it to use as a health care tool for the elderly.

“We’re using virtual reality to improve the way we age, so you don’t become isolated, don’t become depressed, and you can keep your mind happy and healthy,” said Rendever co-founder and CEO Dennis Lally, an MIT Sloan School of Management student who launched the startup with classmate Reed Hayes.

Rendever was one of eight finalist teams — winnowed down from 50 applicants — to pitch health care innovation ideas to a panel of expert judges and a capacity audience last night at the MIT Wong Auditorium in the Tang Center. The competition, part of the 14th annual MIT Sloan Healthcare and BioInnovations Conference (being held today in the MIT Media Lab), is organized by the student-run MIT Sloan Healthcare Club to promote innovation and entrepreneurship in the health care space.

A second-place prize of $4,000 went to Need-a-Knee, a team of MIT mechanical engineering undergraduates developing an inexpensive leg prosthetic that allows users to sit cross-legged — an important part of culture in countries such as India, where current models don’t allow for such flexibility.

Day Zero Diagnostics, a team from the Harvard-MIT Health Sciences and Technology program, earned a $1,000 audience-choice prize for developing a diagnostic tool that makes the detection of specific bacterial infection in hospitals much faster, reducing wait times from days to hours.

Other competing teams were: CareMobile Transportation, an Uber-like medical-transportation startup that employs social workers to transport and care for people with disabilities; Manus Robotics, a wearable robotic gripper that helps stroke survivors with impaired hand functions; Patients Like This, an analytics tool that improves mental health patient outcomes by using electronic health record data; Neurosleeve, a computerized glove that measures electrical function of nerves in the hand to diagnose carpal tunnel syndrome and other conditions; and #1, a wearable device and app system that treats urinary incontinence by tracking pelvic muscle training and measuring moisture associated with incontinence.

In the team’s winning pitch, Rendever said its system includes multiple virtual-reality headsets, custom software, and a tablet. The software syncs headsets together, so users can join together in a virtual world, visiting childhood homes, exotic locales, sports games, or a relative’s wedding across the world. The headsets can be controlled simultaneously by caregivers, using the tablet. All content is also custom-made by Rendever, based on 20 million gigabytes of content mined from the internet.

Apart from providing a socializing tool, the system can double as a form of reminiscence therapy, which involves discussing past experiences, with aid of photographs, familiar items, and music — or virtual cues, in the case of Rendever.

According to trial studies, Rendever’s system has increased overall resident happiness at the Brookdale Senior Living Community in Massachusetts by 40 percent, Lally said. The startup is currently working with the MIT AgeLab to validate those statistics.

Users are asked to work through real-life simulations, such as making dinner, completing a series of tasks. In the process, Rendever’s software collects thousands of data points per minute on movement, reaction time, and executive function. All this can lead to earlier interventions for dementia patients and help measure the efficacy of treatments.

“We can track very precisely how someone moves through this space, and what they were doing,” Hayes, Rendever’s chief operations officer, told MIT News. “We also built a machine-learning model that’s currently being trained to help find patterns [characteristic of] someone who has early-stage dementia versus someone of healthy mind.”

Rendever’s prize money will help fund research and development, with a second trial study kicking off soon. Hayes attributes the team’s win to tapping into an underserved need. “Everyone has a parent or grandparent who’s getting older … and not much can be done when they can’t leave the house,” he said. “The solution we built is a fun way for them to re-experience the world again, to be explorers. We’re bringing that to a demographic that has lost the ability [to explore].”

Last year, Rendever entered the pitch competition — its first entrepreneurship contest ever — and made it to the semifinals round. By refining the business and technology through MIT classes at the Martin Trust Center for MIT Entrepreneurship — under the watchful eye of managing director Bill Aulet — the team came out on top, Reed said. “It’s this awesome story for us to come back [to the competition] and win,” he said.

There were only three prizewinners last night. But MIT Sloan student Maddie Thoms, co-president of the MIT Sloan Healthcare Club that organized the competition, said the aim is to help all the entrepreneurs further refine their ventures. “It’s not just about one or two teams walking away with a good prize. We’re hoping to push a bunch of teams forward in their endeavors,” she said.

In the weeks leading up to the pitch competition, teams were offered mentorship, networking opportunities, and a one-day workshop on developing business pitches. The competition consisted of two semifinal rounds, where judges provided further coaching.

Teams were each required to have at least one MIT or Harvard University student. Criteria for choosing competing teams included determining the novelty of the invention, its technical feasibility, any hurdles in governmental and other regulations, and whether the team has acquired customers or made its first sale.

With the competition, organizers also hope to strengthen the health care community at MIT, in neighboring Kendall Square, and across Boston by fostering connections between teams, judges, and local mentors and investors. Thoms said that networking helps “get the right ideas connected with the right people, ventures, or partner companies.”

Competing amongst similar startups helped second-place team Need-a-Knee solidify a business plan, said team member Matthew Cavuto, a mechanical engineering student and a 2017 Marshall Scholar. The team built a rotating disc with a simple push-button spring-pin mechanism at the knee joint of a low-cost prosthetic. Pushing a button on the disc releases a pin inside, which lets users rotate the disc and snap it into place at an angle to sit cross-legged. In India, for instance, people sit this way for praying, eating, and other activities, but current inexpensive prosthetics aren’t designed for the position.

Most engineering for the prosthetic was completed in one semester, Cavuto said, and the competition helped demonstrate how major global problems can be tackled quickly. “There are real needs that can be solved in a fairly short amount of time in the developing world, and there’s a big market … that’s not usually seen here in the United States,” he said. The team’s $4,000 prize money will go toward International Organization for Standardization testing, which will certify it for safety and compatibility with humans.