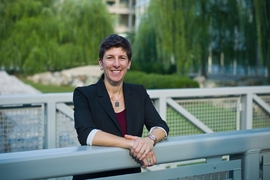 In 2016, MIT announced that it would neutralize 17 percent of its carbon emissions through a unique collaboration with Boston Medical Center and Post Office Square Redevelopment Corporation: The three entitites formed an alliance to buy solar power, demonstrating a partnership model for climate-change mitigation and the advancement of large scale solar development.

Boston Mayor Martin Walsh recently announced that his city will undertake a similar but much larger effort to purchase solar energy in conjunction with cities across the U.S., including Chicago, Houston, Los Angeles, Orlando, and Portland, Oregon. At the time of this announcement, Walsh called upon more cities to join in this collective renewable energy initiative. In describing the agreement, Boston officials said the effort is modeled on MIT’s 2016 effort.

Julie Newman, the Institute’s director of sustainability, spoke with MIT News about the power of MIT’s pioneering model for purchasing solar energy.

A: Climate partnerships are not new to cities like Boston and Cambridge, where urban stakeholders work together to try to advance solutions for climate mitigation and resiliency. In Boston, MIT participates on the city’s Green Ribbon Commission, which is co-chaired by Mayor Walsh and includes leaders from Boston’s business, institutional, and civic sectors. In MIT’s host city of Cambridge, the Institute works collaboratively with the municipality on a range of initiatives related to solar energy, resiliency planning, building energy use, and other efforts focused on climate change.

In October 2016 MIT, Boston Medical Center, and Post Office Square Redevelopment Corporation formed an alliance to buy electricity from a large new solar power installation. The goal was to add carbon-free energy to the grid and, equally important, we wanted to demonstrate a partnership model for other organizations.

Our power purchase agreement, or PPA, enabled the construction of Summit Farms, a 650-acre, 60-megawatt solar farm in North Carolina. The facility is now operational and is one of the largest renewable-energy projects ever built in the U.S. through an alliance like this.

MIT committed to buying 73 percent of the power generated by Summit Farms’ 255,000 solar panels, with BMC purchasing 26 percent and POS purchasing the remainder. At the time, MIT’s purchase of 44 megawatts — equivalent to 40 percent of the Institute’s 2016 electricity use — was among the largest publicly announced purchases of solar energy by any American college or university.

Summit Farms would not have been built without the commitments from MIT and its partners. The emissions-free power it generates every year represents an annual abatement of carbon dioxide emissions equivalent to removing more than 25,000 cars from the road.

A unique provision in the agreement between MIT and Summit Farms will provide MIT researchers with access to a wealth of data on performance parameters at the North Carolina site. This research capability amplifies the project’s impact and contributes to making the MIT campus a true living laboratory for advances in technology, policy, and business models.

Q: What exactly has the City of Boston announced that it plans to do, and how is this modeled on MIT’s solar-power collaboration?

A: MIT, our collaborators, the city of Boston, and the numerous other cities joining Mayor Walsh all share an interest in reducing carbon emissions at the global scale. We want solutions that will transform the energy market, create clean-energy jobs, and sustain healthy, thriving communities. In collaboration, we can have a greater impact than we could if we tried to mitigate emissions on an institute-by-institute or city-by-city basis. By combining our purchasing power, we can escalate the demand for renewable energy more rapidly, triggering new development and installation of renewables through the energy sector in the U.S.

Our project used a convening force, the group A Better City, to invite disparate entities to combine efforts to increase demand for renewable energy. Similarly, Mayor Walsh has called upon leading members of the Climate Mayors Network, representing over 400 cities and 70 million people, to combine their collective purchasing and bargaining power to reduce energy costs and spark the creation of large-scale renewable energy projects across the country. This invitation has launched a coast-to-coast effort to increase the demand for renewable energy across the eight regional grids.

Q: Has the Institute fielded expressions of interest from other entities interested in trying this model? Is there evidence that it will spread further?

A: We are excited about this solution, and we’ve shared this model of solar-collaboration with peers across the country. We’ve hosted webinars, meetings, and presentations, and received immediate and passionate interest from statewide systems, large corporations, and multiuniversity partnerships that have since pursued collective renewable energy projects. We can now point to a dozen or more projects that have been inspired by this model and  are pursuing renewable energy aggregation.

It is important to note that the success of an external collaboration is only as strong as our internal collaboration. The development of the MIT power purchase agreement relied on expertise from more than eight academic and administrative departments, including researchers from related fields, engineers in our utilities area, and staff with expertise in purchasing, finance, and legal areas. We are on the verge of tapping back into these partnerships as we look ahead to determine what is next.

We now have real-time data on energy, emissions avoidance, and financial performance and can evaluate the real world impacts of our project. These findings will influence our thinking going forward. We are considering such questions as how can MIT continue to amplify our efforts? How can we shape our energy impact in the world, and what is the best way to pursue our interest in collectively transforming the energy market? We are continuously broadening our clean energy knowledge base, from multidimensional carbon-accounting frameworks to the exploration of new technologies. Along the way, we have learned that the location of a new wind or solar project matters significantly to its carbon dioxide reduction impact. (The project has a greater benefit if it’s located in a dirtier power grid.) This will inform our work as we actively pursue new partnerships for future scenarios.

The gene variant disrupts lipid metabolism, but in cell experiments the effects were reversed by choline supplements.