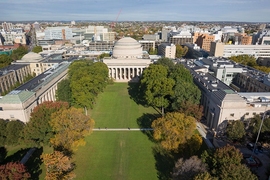 ↓ Download Image
Caption: MIT is on the path to achieve at least a 32 percent reduction in campus emissions of greenhouse gases by the year 2030.

Caption:
MIT is on the path to achieve at least a 32 percent reduction in campus emissions of greenhouse gases by the year 2030.

MIT has been forging ahead on strategies to implement the Institute’s Plan for Action on Climate Change, which was adopted in 2015. Two years after the plan was released, the Office of Sustainability and the Department of Facilities now confirm that MIT is on the path to achieve the plan’s call for at least a 32 percent reduction in campus emissions of greenhouse gases by the year 2030.

MIT’s greenhouse gas emissions have been reduced by 9 percent from 2016 levels, primarily due to electricity produced via a solar power purchase agreement last year with a solar farm in North Carolina, and by 16 percent from the 2014 baseline year – half of the minimum reduction called for. Without accounting for the solar energy purchase, MIT’s total greenhouse gas emissions in 2017 were flat compared to 2016 levels.

Using standard greenhouse-gas-accounting practices, MIT is able to reduce its carbon footprint by deducting the full amount of the purchased solar power from the amount of MIT’s grid-purchased electricity in Cambridge. Since the solar-generated electricity is considered to be carbon-free, the net impact is a reduction of greenhouse gas emissions associated with MIT’s greenhouse gas inventory. MIT’s purchase of power from the solar farm is equivalent to 40 percent of the Institute’s current electricity use.

While total campus emissions were flat, emissions associated with MIT’s academic buildings (comprising 94 percent of MIT’s total emissions) continued to decline in 2017. This is despite an increase in emissions from several other sources, including an increase in the use of specialty research gases, increases in the carbon-intensity of purchased grid electricity, more severe weather, and new campus buildings added to the academic building portfolio.

MIT’s emissions reduction efforts are being informed by a recently completed report outlining plans for cutting campus greenhouse gas emissions. The report was developed collaboratively by the Department of Facilities, the Office of Sustainability, the Office of Campus Planning, and the Environment, Health and Safety Office. The report lays out a roadmap of strategies, and a timeline for implementing its highest-priority measures over the next five years, providing a clear pathway toward achieving the Institute’s near-term emissions reduction goals.

The campus greenhouse gas reduction plan outlined in the report centers on four key approaches: reducing the overall energy use on campus, reducing the use of fossil fuels in campus buildings and vehicles, increasing the use of renewable energy sources to meet campus needs, and minimizing the release of “fugitive” gases from campus operations such as specialty research gases in laboratory buildings. The plan seeks to implement the concept of using the campus as a kind of “living laboratory” to explore innovative and scalable ways of tackling the daunting challenges of climate change, and to use that living laboratory to enhance the educational experience of MIT’s students and provide new hands-on teaching opportunities for its faculty.

“Maximizing energy efficiency across our campus operations in both our existing and new buildings is our first priority,” the report says. In addition, reducing the use of traditional fossil fuels on campus, and developing increased sources of renewable energy, both on campus and in the region, are key components. Beyond reducing MIT’s own carbon footprint, the plan is strongly geared toward solutions that have the potential to be replicated or adapted by other institutions across the country and around the world to maximize their impact.

“A major enabling strategy in the plan is a Department of Facilities program to comprehensively upgrade building utility meters across campus,” says Bernie Richard, director of the Department of Facilities Systems Engineering Group. “This enhanced metering will allow for accurate and credible validation of energy efficiency measures, as well as help to identify appropriate priorities and opportunities.”

The plan also calls for a focus on advancing alternative fuel sources by MIT’s vehicles, potentially adding to rooftop solar panels, and possibly adding new purchases of off-campus renewable energy similar to the existing agreement for the Summit Farms solar plant in North Carolina, which was made possible by the commitment from MIT and its partners.

Another major project is the completion of a refurbishment of the campus Central Utility Plant, a cogeneration plant that currently supplies about 50 percent of the electricity to the main campus, as well as heat and chilled water to most of the central campus buildings. The project, which will take up to three years to complete, will increase its capacity and reduce greenhouse gas emissions by approximately 10 percent, by eliminating all use of fuel oil (except for emergencies) and installing newer, more efficient turbines. Overall, it will become both more efficient and cleaner in its output.

One new addition to the suite of actions to create greater progress toward MIT’s stretch goal of seeking carbon neutrality is a new class that will be offered in the spring 2018 semester, taught jointly by Director of Sustainability Julie Newman and professor of mechanical engineering Timothy Gutowski. Engaging diverse expertise from MIT’s faculty and staff, the class will explore what might be the challenges and potential solutions necessary to usher MIT into a climate-neutral future.

“I am grateful to the members of the greenhouse gas reduction working group for the effort and thought they put into producing this strategy,” says Maria T. Zuber, MIT’s vice president for research. “And I am thrilled that, through the new class being offered this spring, students will participate in a hands-on way in the effort to better understand how MIT can achieve its carbon neutrality aspiration. This is vitally important work, and we need the best ideas we can get.”

MIT opens its energy-use data to the community