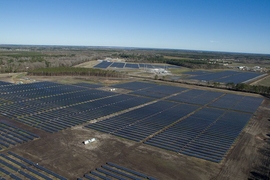 More than 600 acres of solar panels have been successfully installed and connected on land in North Carolina and are delivering their power into the nation’s grid, thanks to a power purchase agreement (PPA) with MIT and two other Boston-based organizations. The installation will not only offset a substantial portion of the Institute’s greenhouse gas emissions but also enable an exceptional level of real-time data collection that could enhance research and education on the design and operation of solar facilities.

The agreement that led to the construction of this 650-acre solar farm, which has a 60-megawatt output capacity, was signed last August by MIT, Boston Medical Center, and Post Office Square Corporation. It is the largest renewable energy project ever built in the U.S. through an alliance among different organizations, and has already spawned interest among other institutions and organizations seeking to emulate the successful aggregation process. This process is seen as a model that can provide a roadmap for other institutions of any size to access renewable energy in a way that may have been out of reach if they had pursued renewable solutions alone.

After many months of study, consultation, and negotiation, the solar farm of 255,000 panels — called Summit Farms — was built, tested, and delivered less than six months after the agreement was signed, creating more than 1,000 jobs at the site during the process. It has so far met or exceeded all specifications. In the process, it is producing clean, renewable energy that is equivalent to 40 percent of MIT’s total campus electricity use. The unit has been officially endorsed by MIT: “It’s producing full power, and all test results gave us a very high level of confidence that the installation is capable of producing at target levels,” says Joe Higgins, director of infrastructure business operations for MIT’s Department of Facilities.

The offsets produced by Summit Farms’ clean, emissions-free power are clear and tangible. In addition to displacing power that in its region comes 40 percent from coal, the solar farm has helped to facilitate the early retirement of a large coal-fired plant nearby, by providing substitute power to make up for the coal plant’s contractual peak-power delivery obligations. The owners of the coal plant are “paying the PPA partners to provide substitute capacity as they come offline,” Higgins says, thus making it economically feasible for the coal plant to retire ahead of schedule.

Because of the way emissions offsets are calculated — based on the mix of generating sources in Massachusetts rather than the mix where the solar plant is located — MIT gets credits in the form of RECs that represent a reduction equivalent to 17 percent of the Institute’s total emissions associated with purchased electricity. In total, the plant will result in avoided emissions of more than 87,000 metric tons of carbon dioxide equivalent per year from the energy grid.

By delivering its power into the electric grid, the facility earns one renewable energy certificate, or REC, for every megawatt-hour of zero-emissions power produced. These certificates provide a standardized method of accounting for clean power that can be used to calculate emissions reductions on the grid brought about by that clean power. In MIT’s case, those RECs are being permanently retired, which means MIT retains the renewable energy attributes.

The Summit Farms solar plant, built on farmland that had been fallow for years, was built using established solar-panel technology. It was installed on schedule and has been delivering power to the grid since January.

A major advantage of the power purchase agreement that led to the construction of Summit Farms is the close two-way relationship to MIT that will enhance engineering and economics research and education. Students and faculty will have access to a wealth of data on many performance parameters at the North Carolina site, as well as comparison data from a set of identical solar panels that will be installed on campus.

“We have a committee convened to explore how to develop a solar test bed at MIT,” says Julie Newman, MIT’s director of sustainability. This facility will connect MIT to the technology at Summit Farms “by providing a centralized, physical anchor on campus.” She says the committee is working hard to make data accessible “as quickly as possible to our research community.” They have been working closely with the developers at the site to make sure the most useful and relevant kinds of data are captured efficiently and accurately. “It’s an opportunity to study a large-scale renewable installation” at a level of detail that is rare at best, she says.

Having that research capability will further MIT’s aims to make the campus a true living laboratory for advances in technology, policy, and business models. “We recognize that there is an unprecedented opportunity to create a solar test bed to de-risk emerging solar technologies, proving their viability to financiers and developers, that could have an impact nationally and globally,” Newman says. Already, several faculty members from multiple departments have expressed interest in the new research and teaching opportunity, Newman says.

Along with an additional 7 percent of emissions that has been saved directly on campus by energy-efficient retrofits and other measures, MIT is already 70 percent of the way towards its stated goal, as part of its Plan for Action on Climate Change, adopted in 2015, to reduce emissions by at least 32 percent by 2030.

Writing for The Wall Street Journal about businesses investing in green power, Brian Baskin highlights how MIT joined forces with two Boston-based organizations to buy power from a solar farm in North Carolina. “We saw it as an opportunity where we could set an example,” says Joe Higgins, MIT's director of infrastructure business operations.

MIT’s sustainability community gets to work