Graduate engineering and economics programs are No. 1 in the nation; MIT Sloan is No. 4.
MIT News Office
Publication Date:
Press Inquiries 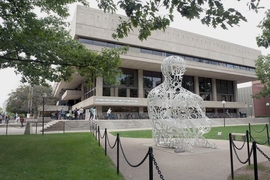 U.S. News and World Report has again placed MIT’s graduate program in engineering at the top of its annual rankings, continuing a trend that began in 1990, when the magazine first ranked such programs.

The MIT Sloan School of Management also placed highly; it shares with Stanford University the No. 4 spot for the best graduate business program.

In the rankings of graduate programs in business, MIT Sloan moved up one step from its No. 5 spot last year. U.S. News awarded a No. 1 ranking to the school’s specialties in information systems and production/operations, and a No. 2 ranking for supply chain/logistics.

U.S. News does not issue annual rankings for all doctoral programs but revisits many every few years. In its new evaluation of programs in the social science and humanities, the magazine gave MIT’s economics program a No. 1 ranking overall and either first- or second-place rankings for all eight economics specialties listed. MIT’s political science and psychology programs also placed among the top 10 in the nation.