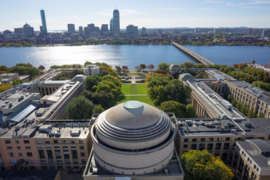 U.S. News and World Report has ranked MIT seventh in its list of the United States’ top universities, which was announced today. This is the fourth year in a row that the Institute has occupied this spot in the magazine’s annual rankings of the nation’s best colleges and universities.

MIT’s School of Engineering has long topped the list of undergraduate engineering programs at a doctoral institution; this year it again occupies the No. 1 spot, followed by Stanford University and the University of California at Berkeley. MIT also placed first in six out of 12 engineering disciplines. No other institution is No. 1 in more than two disciplines.

The Institute tied again this year with Berkeley as the nation’s No. 2 undergraduate business program. Among business subfields, MIT is ranked No. 1 in three specialties.

In the overall institutional rankings, U.S. News placed Princeton University in the No. 1 spot, followed by Harvard University. The University of Chicago and Yale University are tied for No. 3.

Other schools in the top five overall for undergraduate engineering programs are Stanford, Berkeley, Caltech, and Georgia Tech

MIT ranks as the third most innovative university in the nation, according to the U.S. News peer assessment survey of top academics. The Institute also appears on the magazine’s list of universities that most value economic diversity, as reflected by the proportion of undergraduates receiving Pell grants.

MIT has been named one of the top 10 universities in the country by U.S. News & World Report, writes Dylan McGuiness for The Boston Globe.