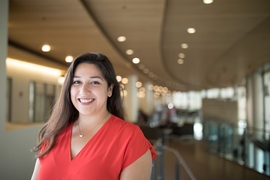 Two months ago, with great anticipation, Dora Aldama ’11 boarded for her first time a 787 Dreamliner plane, headed from Los Angeles to Shanghai. To a typical passenger, the twin-engine jet airliner might have looked like a standard hefty commercial airplane, but to Aldama, it represented a feat of engineering and an exciting glimpse into her immediate future. The 787 was the same model she would be working on for the next six months as part of her research internship to improve Boeing’s production line.

“I was just so excited to be in this plane,” says Aldama, a graduate student in MIT’s Leaders for Global Operations (LGO) program. “I was checking it out — what’s great, not so great. It was a very different experience.”

At Boeing, Aldama will be incorporating her lessons from her first year as an LGO student to optimize the final assembly line while researching how best to increase the speed of each 787’s assembly. She’ll also be recording the tail number of every Dreamliner that she’ll help produce; if she ever finds herself boarding another one, she plans to look for its ID to see if she is flying in a plane she helped develop.

Aldama was an aeronautical and astronautical engineering major as an undergraduate at MIT before working for five years on oil systems of jet engines as an aerospace engineer for Pratt and Whitney, an American aerospace manufacturer. Now, she seeks to understand the big-picture logistics behind the production of aerospace technology including rockets and airplanes.

Aldama decided to return to MIT and join the LGO program for a dual masters in mechanical engineering and business administration because she felt that she could handle technical engineering problems but was less adept at addressing the time-consuming challenges of an operational problem.

For example, as an engineer, when she wanted to replace a part in a jet engine, she could determine the dimensions, pressure characteristics, and physical model, but the part would need manufacturing, transporting, and quality-checking by many other people before final installment within the engine. Aldama says that can take a lot of time and money, and can zap an engineer’s satisfaction in seeing their design come to fruition.

“It’s frustrating when you try to build really cool planes and rockets, but it can be painfully slow,” she says. “I’m drawn to those multidimensional problems — to look at it from a technical standpoint, a business standpoint, and human standpoint. All of those dimensions have to work together.”

In her first year as a graduate student, Aldama has also tapped into connections between technology, and business, and the environment by working as a student fellow with MIT’s Office of Sustainability. Acting as a liaison between MIT’s Office of Sustainability and its Office of Procurement, Aldama is researching sustainable procurement practices across academia and industry, and working on ways to incorporate new sustainable practices within MIT’s procurement process. Her interest in sustainability grew out of observations she made while working as an aerospace engineer.

“Right now, we judge [business success] on financial metrics and growth,” Aldama says. “When we’re trying to get something to fly, we’re not worried about how much we’re wasting beyond the direct use of the product. When we’re all very narrowly focused on a problem, we’re not seeing how our actions are impacting someone else — generating waste, carbon emissions, using up energy — this has rebound effects in other places.”

Aldama believes thoughts about sustainability should be part of everyday decision making, and says that such a framework has broadened her perspective during each of her projects. In a first semester engineering course, for example, she addressed the logistics of developing a device to help Malaysian workers collect palm oil. Aldama’s team came up with a device that works somewhat like a rolling tennis ball hopper. It was a simple and efficient tool for workers whose livelihood depends on palm oil, to help them avoid compromising their physical health when they constantly hunch over to gather palm oil fruits.

Although the project’s goal was to design and deploy a device for palm oil harvesting, it wasn’t lost on Aldama that the palm oil industry is notoriously controversial for its role in deforestation and habitat degradation.

“So you start to get into grey areas,” Aldama said. “I’m making a product that needs to be low-tech, easily maintainable, light, and safe for the people that are using it. It will reduce waste, and improve worker safety and welfare, but, on the other hand, the palm oil industry has a reputation as a pretty destructive environmental force that clears land.”

Aldama sees an underlying need in many sectors to change how business is conducted. Any decision, whether made from an engineering or financial perspective, should include environmental and social impacts, she says.

“[Sustainability] can’t be an afterthought. It has to be integrated early on in decisions,” Aldama says. “Because once things are in place, it’s hard to make changes.”

Aldama’s drive to address multidimensional problems may have started at a young age. Growing up in Corpus Christi, Texas, Aldama remembers cornering herself off at home and working to expand small Lego and K’nex sets so that she could comfortably fit her Barbie dolls into bigger and better toy houses, rollercoasters, and Ferris wheels.

Her father, a chemical engineer from Mexico City, would always tell her “education is freedom.” In high school, she enjoyed literature, math, and science, and was active on the yearbook committee. At an engineering camp between her junior and senior year of high school, she immediately fell in love with aerospace engineering after attending a lecture on satellites.

With encouragement from her parents, Aldama left what she describes as a Friday-Night-Lights-esque community in Texas to study at MIT. Today, she sees herself at the threshold of solving operational and systemic problems in aerospace, including making the industry more sustainable. She understands the difficulty of the task but says it only makes the challenge more appealing.

“Having a good, complex problem to work on,” Aldama says, “is the best thing that could happen to me.”

MIT LGO: Succeeding in its mission to create industry leaders