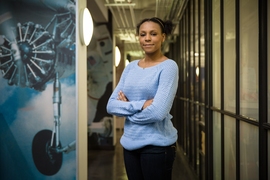 ↓ Download Image
Caption: “I ended up choosing AeroAstro because the people in the major I find are very passionate about not only aerospace but space exploration, and I really liked that vibe,” senior Marlyse Reeves says.

Caption:
“I ended up choosing AeroAstro because the people in the major I find are very passionate about not only aerospace but space exploration, and I really liked that vibe,” senior Marlyse Reeves says.

NASA’s Jet Propulsion Laboratory loomed large for Marlyse Reeves from an early age. Growing up in Pasadena, California, in JPL’s backyard, Reeves developed a love of all things outer space, and the lab was a regular destination for school field trips.

Even as a child, Reeves, now an MIT senior, knew she wanted to work in the space industry: “I realized that the engineers at JPL really enable astrophysicists to make their discoveries, so that was what I wanted to be a part of, expanding that knowledge.”

Her love of space was nurtured at home, too. “My dad had a telescope when we were growing up. I loved science fiction books and movies. I was a big space nerd,” she says.

At MIT, Reeves quickly found her niche in the Department of Aeronautics and Astronautics, where a flexible track within the major allowed her to concentrate on studying autonomous systems. “I ended up choosing AeroAstro because the people in the major I find are very passionate about not only aerospace but space exploration, and I really liked that vibe,” she says.

For Reeves, the importance of role models — particularly for women in industry — has been long been clear. She says her first role model was her mom, who graduated from MIT with a master’s in urban planning and development and was the executive director of the Los Angeles International Airport while pregnant with her little brother. Since coming to MIT, Reeves has sought positive role models for herself, and as president of the student group MIT Women in Aerospace Engineering (WAE) she has organized panels of successful women in the aerospace industry and helped build a supportive community of women who recognize each other’s accomplishments.

Preparing for careers in industry

Reeves is using her capstone project to build a tool that will be directly useful to the aerospace industry. Working with fellow student Kelly Mathesius under the guidance of Warren Hoburg, the Boeing Career Development Professor in Aeronautics and Astronautics, Reeves has been developing a system for automating inspection of composite layups.

Composites make up the structural parts of air- and spacecraft. During the manufacturing process, sheets of material such as carbon fiber are cut out and stacked together before being heated and cured together. For many of the smaller, more intricate parts, this layering is still done by hand and requires manual inspection. “This process gets kind of slow, and requires back and forth between a lot of people,” Reeves says.

Reeves and Mathesius are training a computer vision system to find the edges of each piece so that it can be perfectly guided into place. “That would make the process a lot quicker, more efficient, and [allow us to] keep track of a lot more data about the process,” Reeves says. The pair hopes to take the project to conferences and maybe one day see it implemented in industry. Reeves’ interest in autonomous systems and computer vision has led her to apply to graduate programs in computer science for next year.

As a junior, Reeves was selected to participate in the Gordon-MIT Engineering Leadership Program. The first year of the program is structured as a series of problem-solving labs that tackle abstract concepts such as ethics and use policies, important topics that are often not part of a technical curriculum. The program focuses on leadership for engineers — people who Reeves says may “have really high technical IQs but who may be speaking a different emotional language than you.”

In the second year of the program, students become coaches for the incoming students. “A team coach observes, and watches, and mentors [the younger group], and gives them feedback on how they did in the lab. So the program is really based off of peer feedback, and it’s really the second-year students who are guiding the first-year students into how they can improve as leaders,” says Reeves. She says she has already used concepts that she learned from the program in her internships and other leadership positions at MIT — from club soccer captain to president of WAE.

Reeves has been with WAE since its inception in her sophomore year, and in her junior year she served as the outreach chair. Through mentoring, career events, and internship panels, the group fosters a community for women in all aspects of aeronautics. It also includes women from computer science, physics, and mechanical engineering backgrounds. “We try to connect with women in industry and alumni. We host talks for women around the Boston area who are working in the aerospace industry, and they talk about their research, talk about their work, talk about what it is like working as a female in the aerospace industry. It is a good place to get exposed to that and to find role models,” Reeves says.

November is dedicated to outreach. Last month, Reeves helped organize the first WAE Day, an event for 18 high school girls in the Boston area to come to MIT to learn about aerospace engineering. Students toured labs, attended a lecture given by MIT students on basic rocketry principles, and went to a short talk by an MIT professor. “We have lunch with them, tell them about all of the different aspects of aerospace to get them interested, and help them learn more about it,” says Reeves. WAE is hosting a similar day for middle school girls in the spring.

Reeves says events like these are especially important for exposing young women to the possibilities of the field.

“Being a person who has gone into aerospace industry and has seen the lack of women — there are often times where I am the only female in the room at an internship — I think it’s important for young women and girls to get role models, and just see that there are women doing it. I have encountered a lot of strong female role models for myself in industry. [It was inspiring to see] that they weren’t really held back by any gender inequalities, that they kept pushing forward, and became technical experts in their fields, became excellent managers, and rightfully earned the respect of the people around them just being themselves and being passionate and dedicated,” Reeves says.

“A lot of our events are open to men as well. We want to build a community of people who support women in aerospace,” she adds.