Investigating the trap of unemployment 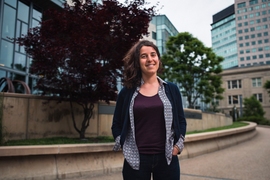 ↓ Download Image
Caption: “I was happy I didn’t get accepted into an engineering-only school, because I have two left hands and I’m way more interested in social sciences,” PhD student Aicha Ben Dhia says.

Caption:
“I was happy I didn’t get accepted into an engineering-only school, because I have two left hands and I’m way more interested in social sciences,” PhD student Aicha Ben Dhia says.
Credits:
Photo: Ian MacLellan

Sitting at a computer screen in a windowless office, a third-year MIT PhD economics student from Paris looks at the latest numbers on France’s unemployment rate. Although the office is located on MIT’s campus, Aicha Ben Dhia’s mind is thousands of miles away. She’s thinking about the people whose lives are reflected in those numbers, and trying to imagine the job search from their point of view.

This summer, Ben Dhia will travel to her home country to conduct field research and meet the people she often envisions while analyzing the data. Working with the French governmental agency Pôle Emploi, she will investigate how workers search for jobs and how employers search for workers. She is dedicated to understanding the practical challenges job seekers face and the consequences of those challenges for the national economy.

The unemployment rate in France is currently around 10 percent. Ben Dhia says that percentage doesn’t include the millions of part-time workers who are still job hunting and are registered with Pôle Emploi.

“It’s even worse for young people between the age of 15 and 24. This group’s unemployment rate is as high as 23 percent,” Ben Dhia says. “Another feature that makes it special in France is long-term unemployment. You have a lot of people in France that have been unemployed for more than a year.”

Tools for the hunt

In France, Ben Dhia says, there is a big push to send job seekers to training programs that can build on existing skills or help them learn new skills. She says it’s easy for economists and government agencies to offer training programs to job seekers and watch the unemployment rate needle bounce up or down. However, there are many other factors that contribute to the success of finding long-lasting employment.

Ben Dhia tries to see the situation from the job seeker’s perspective. Take, for example, a 50-year-old construction worker who has just been laid off.

Ben Dhia is hoping to discover an efficient way to sort job seekers so they can participate in the most helpful training programs. She is using statistical data and research to inform counselors and job seekers about the best options for securing long-term employment.

During the summer, Ben Dhia will be spending time in France to meet some of these individuals, ask them questions, and better understand the current process of job searching in France. She expects to learn about the underlying obstacles and challenges of an unemployed person in order to better develop strategies to help them find jobs.

Currently, she says, people go about the process in an ad hoc way. Job counselors meet hundreds of job seekers and usually can offer only 30 minutes of their time per person. Furthermore, job applicants may not receive substantial feedback from jobs they are rejected from, which could help them learn from the process. Ben Dhia believes the problems are compounded by job seekers who are paralyzed by their vulnerability. All of this can contribute to the country’s economy on a large scale.

“You have to build yourself,” Ben Dhia says. “And that’s very hard at a time when you’re at your lowest confidence. You doubt yourself very much, but because you have to be pushy and proactive, you have to make decisions to keep going.”

If there was a statistical method based on data that could direct job seekers to the right path, perhaps these challenges could be circumvented, according to Ben Dhia. She hopes to get a better understanding of what job seekers are up against by meeting them in person.

“One of the things I like the most is going to talk to people, a way to sympathize, and work with people,” Ben Dhia says. “I know I’m excited by data, but I think in terms of conceptual problems. Math is cleaner than economics, but I did not do economics to do theory. You want to go concrete and discover how [the problem you’re studying] happens.”

It wasn’t always clear to Ben Dhia that she would eventually study economics. After high school, she spent two years in a preparatory school with a concentration in mathematics and physics. Although her parents are researchers in math and engineering fields, she had always known she wanted to work in social sciences. When she was admitted to a distinguished university in Paris, École Normale Supérieure, which offers courses for a variety of disciplines, Ben Dhia was relieved.

“I was happy I didn’t get accepted into an engineering-only school, because I have two left hands and I’m way more interested in social sciences,” she says.

Her decision to come to MIT and pursue economics sprouted from a manual search through a large book containing alumni contact information. She emailed each alumnus that she thought had interesting background. The first person she met counseled her to challenge herself, try something different, and apply for schools in the U.S.

“Paris, I knew. Math, I knew. I wanted to be challenged with something new, and I wanted something with a social impact that had a math background,” Ben Dhia says.

When she first came to MIT, Ben Dhia was unsure about what area of economics she wanted to pursue. Under the supervision of Esther Duflo, the Abdul Latif Jameel Professor of Poverty Alleviation and Development Economics in the Department of Economics, Ben Dhia traveled to India to implement a project to increase immunization rates of infants in the state of Haryana. Even though the government provided free immunization for children in the state, only 50 percent of infants in Haryana were obtaining basic immunizations by the time they were 1 year old.

While in India, Aicha and her team were trying to scale up an earlier experiment that increased the baseline percentage threefold (from 6 to 18 percent), with a system to keep clinics regularly staffed with nurses and health center workers. After realizing that parents carried their children from distant villages to immunize their child for seemingly inconceivable long-term benefits, the researchers tried compensating visitors with a short-term benefit — a bag of lentils at the end of their visits. This increased the percentage of immunized children from 18 to 36 percent.

“It was fantastic to spend two months in India. Seeing how a project works in practice is very insightful and I learned a lot. More importantly I met incredible people and made great friends” Ben Dhia says.

A love of the outdoors

The year prior to starting graduate school at MIT, Ben Dhia explored other job opportunities. To help a friend, she wrote math lessons for a third-grade textbook that was distributed throughout Senegal. Another friend asked if she could consult on ideas for children’s toys that emphasize the value of trying over success. For half a year Ben Dhia also worked in a private equity investment firm in Senegal. Although she didn’t enjoy the negotiating aspect of the job, Ben Dhia was thankful for the opportunity.

“Working in a different environment, meeting different people, and working in Africa with Africans in a firm that had an exposure to other countries and very high work standards was a short, but very rich experience,” she says.

In Boston, Ben Dhia is physically active, swimming, running, hiking, and especially playing soccer. In France, she says it’s rare for women to play soccer, and as a kid she would play the sport with her brother. Here, whenever and wherever there’s enough grass, she loves to play.

Although Ben Dhia is uncertain about what she will want to do in the future or what kind of career she will have, she thinks a lot about going back to Europe, somewhere new but close to family. It’s clear that Ben Dhia lives for adventures and close relationships with other people.

Economics and statistics can be cold and technical but Ben Dhia’s work is balanced with her loves for travel, playing guitar in the French Alps, a good soccer match on a glossy grass field, her yearly trips to visit family in Tunisia, and the dinners she shares with friends while songs by Salif Keïta, an afro-pop singer-songwriter from Mali, play in the background.

On days when the weather is nice and she still has work to do, Ben Dhia can’t stand her windowless office. She grabs her stuff and searches for a new spot to make a temporary office.

“On sunny days like this, I cannot stay in my office. I look for sun and I look for windows,” she says.

Making banking effective for the poor