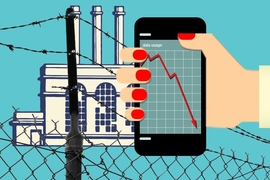 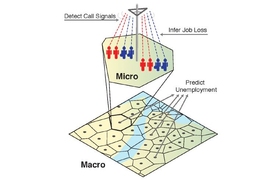 ↓ Download Image
Caption: A schematic view of the relationship between job loss and call dynamics.
Credits: Courtesy of the researchers

Caption:
A schematic view of the relationship between job loss and call dynamics.
Credits:
Courtesy of the researchers

If you leave your job, chances are your pattern of cellphone use will also change. Without a commute or workspace, it stands to reason, most people will make a higher portion of their calls from home — and they might make fewer calls, too.

Now a study co-authored by MIT researchers shows that mobile phone data can provide rapid insight into employment levels, precisely because people’s communications patterns change when they are not working.

Indeed, using a plant closing in Europe as the basis for their study, the researchers found that in the months following layoffs, the total number of calls made by laid-off individuals dropped by 51 percent compared with working residents, and by 41 percent compared with all phone users. The number of calls made by a newly unemployed worker to someone in the town where they had worked fell by 5 percentage points, and even the number of individual cellphone towers needed to transmit the calls of unemployed workers dropped by around 20 percent.

“Individuals who we believe to have been laid off display fewer phone calls incoming, contact fewer people each month, and the people they are contacting are different,” says Jameson Toole, a PhD candidate in MIT’s Engineering Systems Division, and a co-author of the new paper. “People’s social behavior diminishes, and that might be one of the ways layoffs have these negative consequences. It hurts the networks that might help people find the next job.”

When the factory closes

The paper, just published in the Journal of the Royal Society Interface, builds a model of cellphone usage that lets the researchers correlate cellphone usage patterns with aggregate changes in employment. The researchers believe the phone data closely aligns with standard unemployment measures, and may allow analysts to make unemployment projections two to eight weeks faster than those made using traditional methods.

“Using mobile phone data to project economic change would allow almost real-time tracking of the economy, and at very fine spatial granularities … both of which are impossible given current methods of collecting economic statistics,” says David Lazer, a professor at Northeastern University and a co-author of the paper.

In addition to Toole and Lazer, the co-authors of the paper are Marta Gonzalez, an associate professor of civil and environmental engineering at MIT; Yu-Ru Lin of the University of Pittsburgh; Erich Muehlegger of the University of California at Davis; and Daniel Shoag of the Harvard Kennedy School.

The study’s starting point was an automotive plant in Europe that closed in 2006, leaving about 1,100 workers unemployed in a town of roughly 15,000 people. Having the information about the layoffs allowed the researchers to build an algorithm that, by analyzing phone-use patterns, assigns a probability that someone has become unemployed. The phone data was anonymous at the individual level, ensuring a certain level of privacy.

The researchers then extended that usage model to see how well it corresponded with larger-scale unemployment, using eight quarters of unemployment data in 52 provinces of a European country.

“We were looking for a way to use this data to really understand economic behavior and critical economic indicators,” Toole says.

A complement, not a substitute

However, the researchers emphasize that they are not proposing the new method as a replacement for time-tested ways of measuring unemployment. Instead, they see it as an additional tool for analysts.

“These methods should not be viewed as substitutes for current methods of collecting data about the economy as much as very powerful complements,” Lazer says.

Toole says the study is conceptually similar to the MIT-based “Billion Prices Project,” which uses sales data to develop nearly real-time inflation estimates. In the same way, he says, this research might make a methodological impact on unemployment estimates.

“The Billion Price Project was one of the things that inspired us,” Toole says.

Other scholars who have seen the paper say it is a promising step in the application of new forms of data toward research questions. Aaron Clauset, an assistant professor of computer science at the University of Colorado, calls it a “pretty exciting insight,” and believes “the conclusions they [the researchers] reach are reasonable.”

As Clauset notes, however, the mobile phone data in the study is indirectly related to employment. So while in this instance, he believes, the authors “can reliably connect employment status to mobile phone usage pattern,” in general, “we should recognize that many questions remain about how well this approach generalizes to other economic variables, other contexts, and across time.” Individual privacy issues, Clauset adds, will remain important regarding this mode of research.

For her part, Gonzalez says she intends to construct future studies about cellphone usage changes to see how urban mobility, or a lack thereof, hinders economic opportunities for workers and unemployed people.

“In the future we want to see how the same data can be used to further measure commuting challenges by income group,” she says, adding that the researchers’ intellectual “mission” is “developing methods that convert data from communication technologies into meaningful information.”