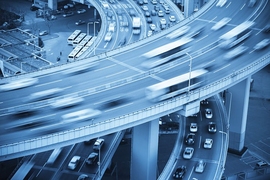 How much commuting can you tolerate? A new study by MIT researchers shows that across countries, people assess their commutes by the time it takes them to complete the trip, generally independent of the distance they have to travel — as long as they have a variety of commuting options to chose from.

The study, which compares commuting practices in five locations on four continents, also demonstrates the methodological validity of using mobile phone data to create an accurate empirical picture of commuting.

“Every country has had its own different way of doing things and collecting data,” says Carlo Ratti, an associate professor of the practice in MIT’s Department of Urban Studies and Planning, director of MIT’s Senseable City Lab, and a co-author of the new study. “Here we have standard data which allows us, for the first time, to evaluate mobility across countries.”

Commuting research has often been conducted via surveys, making it difficult to develop cross-country comparisons. But by using anonymized phone data, the MIT researchers found some fundamentally similar patterns in different locations.

“There was an element of surprise in how well the data showed this,” says Kung, the corresponding author on the paper.

From Massachusetts to Africa

In Portugal, people could tolerate about 70 minutes of commuting in the morning, a figure that held fairly constant for commutes ranging anywhere from about 5 kilometers to more than 40 kilometers. About 28 percent of commuting trips around the country’s largest city, Lisbon, occurred on public transport — suggesting that commuters seem willing to budget the same amount of time whether they walk, drive, or take buses or trains.

These maps show morning commute profiles across three cities: Abidjan, Ivory Coast; Lisbon, Portugal; and Riyadh, Saudi Arabia. All home locations have been aligned to a central point to show the variability of distance and direction among the cities over the same time period.

By contrast, using GPS data in a location where automobiles are the only realistic commuting option — Riyadh, Saudi Arabia — the researchers found that the amount of time spent commuting did, in fact, correlate to the distance traveled: The further commuters had to go by car, the longer it took them.

In Riyadh, only 2 percent of commuting trips were on public transport, and the average morning commute was about 50 minutes for trips of 5 to 20 kilometers, but increased to about 65 minutes for commutes of 20 to 40 kilometers.

As in Riyadh, driving distance related to time spent in the vehicle, although data from all forms of commuting — Milan also has suburban rail lines, for instance — would be needed to characterize the overall pattern of commuting in the area.

The researchers believe the findings may have practical applications for urban planners and designers — especially knowing that commuters will use a variety of transportation options to stabilize their commute times, rather than insisting on driving to work.

“It suggests that in places that have a lot of different transportation options available, this [limit on time] holds quite well,” Greco says. “In places that lean in one direction, car cultures, we saw a stronger association between distance and time.” Sobolevsky adds: “People try to adapt to their situations.”

The research also gives some support to a hypothesis, published by Italian physicist Cesare Marchetti in the 1990s, that humans have universally had commute times of about an hour, throughout history. Because the new findings show commute times varying across countries, but having regular patterns within those countries, the co-authors in the paper say the data represents the “localized form” of Marchetti’s idea.

Scholars say the paper adds to our knowledge of commuter behavior. Filippo Simini, a lecturer on the Faculty of Engineering at the University of Bristol, in Great Britain, says the research is an "important contribution" to the question of how people allocate time for travel. Recognizing the greater significance commuters give to time, rather than distance, Simini adds, "may have a significant influence on both human mobility modeling, prompting a shift from distance-based to time-based descriptions, and on practical applications in urban and transportation planning."

The researchers suggest that additional studies, with more granular phone data, could further refine the broad patterns found in their research.

“When cities in general take survey approaches to understand how people move, these are fraught with inaccuracies, and they’re inconsistent from country to country,” Greco says. “If you can standardize that measurement procedure, it becomes much easier to look at how people move on global level.”

The study is part of a larger research project sponsored by mobile equipment manufacturer Ericsson that is being conducted by the Senseable City Lab.

The Future of Urban Mobility