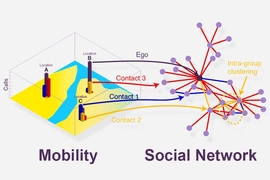 ↓ Download Image
Caption: MIT researchers have created a new model of how much urban travel is based on social activity, which may help urban planners estimate how people move around cities.
Credits: Courtesy of the researchers (edited by MIT News)

Caption:
MIT researchers have created a new model of how much urban travel is based on social activity, which may help urban planners estimate how people move around cities.
Credits:
Courtesy of the researchers (edited by MIT News)

If you live in a city, you know that a fair amount of your movement around town is social in nature. But how much, exactly? A new study co-authored by MIT researchers uses a novel method to infer that around one-fifth of urban movement is strictly social, a finding that holds up consistently in multiple cities.

The study used anonymized phone data that, unlike most data in the field, provides information that can be used to reconstruct both people’s locations and their social networks. By linking this information together, the researchers were able to build a picture indicating which networks were primarily social, as opposed to work-oriented, and then deduce how much city movement was due to social activity.

“Adding two data sources — one on the social side and one on the mobility side — and layering them one on top of each other gives you something that’s a little bit greater,” says Jameson Toole, a PhD student in MIT’s Engineering Systems Division, and one of the authors of a newly published paper outlining the study’s results.

“It’s a way to look at the data that wasn’t done before,” says Marta Gonzalez, an assistant professor in MIT’s Department of Civil and Environmental Engineering, and another co-author of the study.

By developing a new means of quantifying how much urban travel is based on social activity, the researchers believe they have started creating a new analytical tool that could be of use to planners and policymakers.

“There are a lot of people who need to have estimates of how people move around cities: transportation planners and other urban planners,” Toole says. “But a lot of data-driven models don’t take into account social behavior. What we found is that … if you are trying to estimate movement in a city and you don’t include the social component, your estimates are going to be off by about 20 percent.”

The paper, “Coupling human mobility and social ties,” is appearing this week in Interface, a peer-reviewed journal published by the Royal Society. The co-authors are Toole, who is the lead author; Carlos Herrer-Yaque, of the Technical University of Madrid; Gonzalez, who is the principal investigator on the study; and Christian Schneider, an MIT post-doctoral researcher during the course of the study.

The study’s anonymized mobile phone data comes from three major cities in Europe and South America. By examining the locations of calls, the networks of calls made, and the times of contact, the researchers found that most people have essentially three kinds of social networks in cities: social companions (who they are around a lot in the evenings and on weekends), work colleagues (who they tend to contact during weekdays), and more distant acquaintances with whom people have more sporadic contact.

After distinguishing these networks from each other, the researchers were able to quantify the extent to which social activity was the primary cause of an urban trip; their conclusion falls within the bounds of previous, broader estimates, which have ascribed 15 to 30 percent of urban movement to social activity.

“It’s pretty rare you would find these patterns showing up by themselves in multiple cities,” Toole says. “It lends credence to the universality of this [pattern].”

In the paper, the researchers also build a model of urban social movement, which they call the “GeoSim” model; it extends previous models of urban mobility by adding a layer relating to social-activity choices. The model better fits the data in this study, and could be tested against future data sets as well.

“Big data is amazing,” Toole says, “but this adds the context back into the social networks and movements.”

Scholars say the paper brings new insight to urban mobility studies. The study’s “novelty resides in the method used to study the relationship between mobility of different users and their social relationship,” explains Esteban Moro, a professor of mathematics at the Charles III University of Madrid, in Spain. “Using different mobility metrics, the authors are able to know the nature of the relationship between two people. ... This allows a quantitative understanding of how people manage their time, tasks, [and] interactions in a geographical context like cities.”

Moro adds that the current research project opens the way for more detailed studies of the subject, noting, “It would be interesting to see if the socioeconomic status of people, their age, and/or gender have a role in the results found.”

The research was partly funded by the Accenture-MIT Alliance in Business Analytics, the Center for Complex Engineering Systems at MIT, and the National Science Foundation.