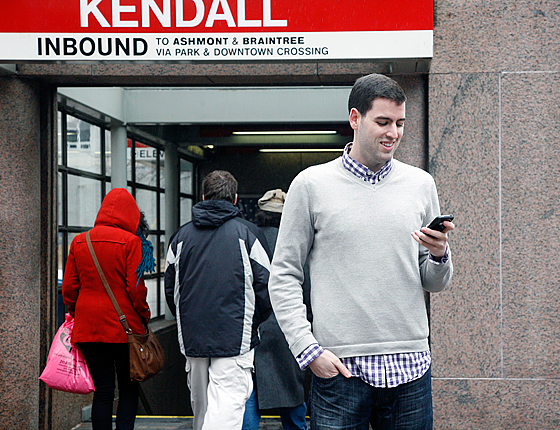 "Every time you use your cellphone, there is a little breadcrumb that’s stored that can be used in a lot of different ways to help improve human lives," says Jameson Toole, a second-year PhD student in MIT's Engineering Systems Division. Photo: Allegra Boverman

When Jameson Toole explores the streets of Boston and Cambridge, he sees problems waiting to be solved — and he believes some solutions are already in our pockets.

“Mobile phones are amazing data sensors,” says Toole, a native of Saratoga Springs, N.Y., and a second-year PhD student in the Engineering Systems Division at MIT. “Every time you use your cellphone, there is a little breadcrumb that’s stored that can be used in a lot of different ways to help improve human lives.”

Together with his adviser, Marta Gonzalez, the Gilbert W. Winslow Career Development Assistant Professor of Civil and Environmental Engineering, Toole is an advocate of big data: Specifically, he aims to harness the stockpile of information collected by our electronic devices. Whether it’s via an app or simply the data a phone company collects about its customers, Toole says, information stored in cellphones can be valuable in urban planning.

“We know people travel for work, but what about other locations?” Toole says. “If we can trace how people move for other social reasons, we can help urban planners determine which areas receive the highest traffic and might be good places for businesses to invest in.”

Gonzalez’s lab recently showed that a relative handful of Boston-area drivers contribute disproportionately to gridlock; more importantly, these few drivers are concentrated in just a few neighborhoods. This was deduced using location information gathered from cellphones.

Although Toole was not involved in that specific study, he cites it as an example of the power of seemingly innocuous data. “We can now target those specific neighborhoods and work with engineers to improve traffic conditions there,” he says.

While urban planning and traffic engineering aren’t on Toole’s intended career path, he has always had diverse interests: As an undergraduate at the University of Michigan, he triple-majored in physics, math and economics.

“I was interested in those subjects independently, and in order to take upper-level classes, I had to take the basic classes, and I ended up with a triple-major,” Toole says.

He took an interest in his current line of work after spending a summer at the Santa Fe Institute in New Mexico. While there, he worked with Nathan Eagle — now an adjunct assistant professor of epidemiology at the Harvard School of Public Health and a research assistant professor in computer science at Northeastern University — who introduced him to the use of data to glean broader information about the world. The experience gave Toole a glimpse into how seemingly random data can be put into coherent models and used to inspire change.

Despite predictions that the rise of big data will lead to the inevitable demise of modeling as a means of deriving data, Toole believes that there still is room for modeling. “If I can come up with a model, then I don’t have to wait for the data,” he says. “Besides, you can get overwhelmed by data, and data shouldn’t be the only thing influencing decisions.”

Ultimately, he sees his role as a data scientist as a partnership with empiricists: “Data scientists should try to ask questions in more meaningful ways. Just because I have data doesn’t mean I have the solutions to problems; I still have to work with architects and economists to come up with those solutions.”

For someone whose research relies on data collected from people who are “plugged in” all the time, Toole himself isn’t heavily engaged online, beyond his Twitter and Facebook accounts. “Amazingly, I don’t have that many apps on my phone,” he says, picking up his iPhone and swiping. “I have about three screens’ worth, but I rarely navigate past the home screen.”

In what little spare time he has, Toole likes to travel — even if work is involved. Last year he visited Stockholm for a conference, where he gave a presentation on big data; he will travel to Estonia and Copenhagen in the coming months, also for conferences. “Work is very much play for me,” Toole says.

Toole has a Google internship lined up for this summer. After grad school, he is excited to see what new opportunities exist in the emerging field of data science. “If there’s a market for teaching what I do, I would love to do that,” he says. “At the same time, I could also see myself working with companies that use data science to tackle problems in information technology, health care or education.”