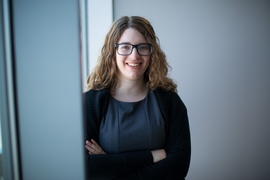 ↓ Download Image
Caption: “There are some big unanswered questions in the policy debate of whether charter schools should be allowed to expand,” Elizabeth Setren says; key among these are questions pertaining to how well the schools serve special education students and English language learners, and what happened when charter schools expanded in 2010. 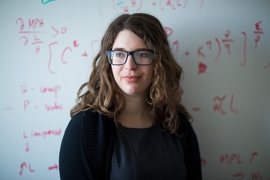 ↓ Download Image
Caption: “There are some big unanswered questions in the policy debate of whether charter schools should be allowed to expand,” Elizabeth Setren says; key among these are questions pertaining to how well the schools serve special education students and English language learners, and what happened when charter schools expanded in 2010.
Credits: Photo: Bryce Vickmark

Caption:
“There are some big unanswered questions in the policy debate of whether charter schools should be allowed to expand,” Elizabeth Setren says; key among these are questions pertaining to how well the schools serve special education students and English language learners, and what happened when charter schools expanded in 2010.
Credits:
Photo: Bryce Vickmark

Elizabeth Setren was a sophomore at Brandeis University trying to figure out how to combine her dual loves of math and public policy when she stumbled across the perfect answer: economics. Now, as a PhD student in economics at MIT, Setren has spent the past four years researching the charter school system in Boston in an attempt to figure out what exactly is going on, and what policymakers need to know.

As she strives to “infuse facts into what’s a very emotional and ideological debate” on the expansion of charter schools in the Boston area, Setren is also working closely with school leaders, and she meets with decision-makers in the policy sphere to ensure that they have as much information as possible. In fact, she regularly presents her work to various agencies  such as the Massachusetts Department of Elementary and Secondary Education, and her research is featured on Massachusetts Governor Charlie Baker’s website.

Discovering a love of economics

Setren’s interest in education started early: There are many teachers in her extended family, and she attended public school in Baltimore County, Maryland, where she was thrust into an academic environment characterized by some of the very same issues she now studies.

“We had students from many different countries, speaking many different languages,” she says, “and it really stood out to me that my schools were very diverse, but they were also very segregated. It seemed like where you went to elementary school and where you went to middle school was very determinant of how advanced your coursework was. So that inequality in our education system was very apparent to me from the beginning.”

Setren was drawn to research as a high school student and dabbled in various math and science-related fields — she interned with NASA and worked in an environmental biology lab where she collected specimens in the Chesapeake Bay. However, it was as an undergraduate at Brandeis University that she uncovered her true research passion: economics.

“When I took my first econ course, it just kind of clicked,” she says. “It was a great way to combine my love of math and problem-solving with my interest in making progress and better understanding social and public policy issues.”

From that point forward, Setren dove into economics research with summer internships, a senior thesis, and a two-year stint at the Federal Reserve Bank of New York. Along the way, she became increasingly certain that graduate school was the right move for her, which is how she landed at MIT.

Once at MIT, Setren decided to study education, and the Boston charter schools in her own backyard seemed like a convenient yet important place to start. In 2010, the Commonwealth of Massachusetts decided to increase the number of charter seats and schools in Boston, and there is currently an effort to increase these numbers once again. Still, charter schools remain a contentious topic. “There are some big unanswered questions in the policy debate of whether charter schools should be allowed to expand,” says Setren. Key among these are questions pertaining to how well the schools serve special education students and English language learners, and what the outcomes were when charter schools expanded in 2010.

Setren’s research is aided by the fact that in Boston more students apply to charter schools than can be admitted, so students get into these schools by random lottery. Consequently, researchers can compare the academic outcomes of students who got into the charter schools to the outcomes of students who did not. As Setren puts it, “It's an apples-to-apples comparison of kids who wanted to go.”

Setren, along with co-authors Sarah Cohodes of Teachers College at Columbia University and Chris Walters of the University of California at Berkeley, is using this lottery data to assess some important questions about the 2010 charter school expansion, including whether the state picked optimal candidate schools to expand and whether schools were able to maintain quality after expansion. She is also looking into how student demand for charters evolved during this period, and what characteristics the effective school networks share. This research could inform  the current debate over whether more charter schools should open.  She is also examining how well charter schools serve special education students and English language learners, two groups that have not been well studied in the past.

“I'm really shocked that there hasn't been much attention by quantitative researchers to understand what types of education policies are effective for these populations,” says Setren. “It just stood out to me that there wasn't much evidence, and that more research could be really helpful.”

Setren compared the achievement of special needs lottery applicants in charters and in traditional public schools, and was surprised to discover that across the board, regardless of their level of need, these students are much more successful in charter schools. In fact, for English-language learners, a year in a charter school essentially allowed them to catch up to native English speakers in traditional public schools, erasing much of the achievement gap that typically exists.

“The outcomes for English-language learners and special education students are really lagging behind,” says Setren. “They're two of the most disadvantaged groups, and so I think any effort to understand what can work and what can make a difference is really important.”

Setren is also examining how different classroom technologies such as tablets equipped with learning applications affect the academic outcomes of students.

“These things are becoming more common, and they are rather trendy,” says Setren, “but we don't really know if they’re effective, and even within that, what types of models and programs are effective. Obviously there could be good apps and bad apps, but how do you sift through all of that?”

Setren set up a simple study with a local network of schools that have a 30-minute free period during the day. The schools were able to purchase some iPads, but not enough for every student, so Setren created two groups: one that used iPads equipped with learning applications during the free period, and another that did not. The results were marked: The students that used the iPads for 30 minutes a day during the year did much better on standardized math and English exams, an outcome that Setren views as very encouraging when it comes to helping students overcome existing achievement gaps.

The debate about charter schools in Boston is ongoing, and Setren’s work has thrown her into the fray. Throughout her research she has stayed connected to the schools she studies, by visiting and building relationships with school leaders and education administrators.

“That's important for me as a researcher,” she says. “To make sure what I'm doing isn't removed from the reality on the ground, that I'm not misunderstanding the climate, and also to better understand my results by checking with practitioners who really understand what's going on.”

After finishing her PhD, Setren plans to stay in academia and further pursue her current area of study.

“I want to continue doing research to help understand educational inequities, particularly with special needs students and technology, but also in other areas,” she says, “to inform the debate and help us better understand these issues and what might be possible solutions.”