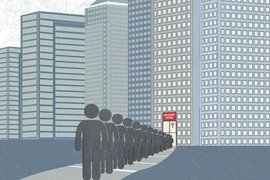 ↓ Download Image
Caption: “We found that companies with high leverage around 2006 ended up laying off more people,” says Xavier Giroud, the Ford International Career Development Professor of Finance at the MIT Sloan School of Management and co-author of a new study that sheds further light on the Great Recession.

Caption:
“We found that companies with high leverage around 2006 ended up laying off more people,” says Xavier Giroud, the Ford International Career Development Professor of Finance at the MIT Sloan School of Management and co-author of a new study that sheds further light on the Great Recession.
Credits:
Image: Christine Daniloff/MIT

The debt levels of large companies just before the Great Recession of 2007-2009 are strongly linked to local unemployment spikes during that time, a novel study co-authored by an MIT professor finds — adding another dimension to our picture of the recent economic crisis.

“We found that companies with high leverage around 2006 ended up laying off more people,” says Xavier Giroud, the Ford International Career Development Professor of Finance at the MIT Sloan School of Management and co-author of a paper detailing the study’s results. “Companies with a lot of debt may have no other option. That can potentially exacerbate a crisis.”

The study takes a unique, granular look at firm-by-firm financial and employment data as well as county-by-county housing data across the U.S.

The research is unorthodox because much of the discussion and analysis of the recession has focused on the rising levels of household debt in the U.S. In the early 2000s, with incomes stagnant for many Americans but housing prices rising, people often borrowed against their home equity to finance spending — then saw their home values crash. That badly hurt consumer spending, or demand, which slowed the overall economy.

But Giroud says that is only one element of the economic situation that we should consider. “The general belief is that what really mattered was household leverage,” he observes. “Households got too much debt, and when the crisis started, there was no coming back. And that was a very important driver of the crisis. But nobody has really thought about firm leverage.”

The paper, “Firm Leverage, Consumer Demand, and Unemployment During the Great Recession,” appears in the latest issue of the Quarterly Journal of Economics. Holger Mueller, the Nomura Professor of Finance at New York University’s Leonard N. Stern School of Business, is Giroud’s co-author.

Firm by firm, county by county

While the names of the specific firms in the Census Bureau data cannot be released, typical companies companies in the study would be, say, large chain retailers or chain restaurants, which employ people across the country.

Giroud and Mueller examined the records of roughly 2,800 firms that operated about 284,000 local establishments or branches of their enterprises. The total number of employees at those firms, nationwide, was a little over 11 million, on the eve of the recession.

While sorting the firms according to debt levels, the researchers also looked at county-by-county and zip code-by-zip code housing prices. The employment losses were bigger in regions that experienced a larger drop in housing prices, as those areas had a larger drop in consumer demand. This approach enabled the scholars to study the varying responses of firms with high leverage and low leverage, because, as Giroud says, “We can compare the employment losses at two establishments that are at the same location — and hence are subject to the same drop in consumer demand — where one of them belongs to a high-leverage firm, while the other [establishment] does not.”

Giroud adds that the paper is not critiquing companies for taking on larger amounts of debt in and of itself: “We’re not really taking a stand about how they ended up having more debt than other companies.” It may be, he adds, that in 2006, at the onset of the economic dropoff, more heavily leveraged companies had solid business plans but bad timing. That led creditors to tighten lending to those firms, leading to layoffs.

“It was presumably harder for them [highly-leveraged companies] to get more financing during the crisis, to keep their operations afloat, and there was just no way around the layoffs,” Giroud says.

Giroud emphasizes that the firms in question are not financial firms, whose copious amounts of leverage have drawn major attention over the last decade. Investment banks such as Lehman Brothers and Bear Stearns collapsed after borrowing heavily to make bets that did not pay off.

And while an immense amount of debate has gone into determining the right policies to control the debt accumulated by investment banks, much less has been directed toward the large firms that employ many more people. Yet, as Giroud and Mueller write in the paper, “Our research suggests a possible role for employment policies that target firms directly besides conventional stimulus.”

At a minimum, Giroud adds, that means policymakers should have a growing awareness of the significance of balance-sheet issues when it comes to employment, especially during economic downturns.

“Policy options are always tricky to formulate,” Giroud says. “A lot of the time, people think big public firms will always be able to raise capital … but even those companies [can] be financially constrained. It is important that firms monitor their leverage ratios.”