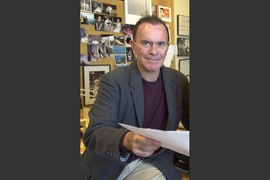 ↓ Download Image
Caption: A nutrient mix based in part on research from the lab of MIT Professor Emeritus Richard Wurtman has shown promise in treating the early stages of Alzheimer’s disease.

Caption:
A nutrient mix based in part on research from the lab of MIT Professor Emeritus Richard Wurtman has shown promise in treating the early stages of Alzheimer’s disease.

Much of Professor Emeritus Richard Wurtman’s career in MIT’s Department of Brain and Cognitive Sciences revolved around developing new treatments for diseases and conditions by modifying chemicals produced in the brain.

Since coming to MIT in 1970, Wurtman, the Cecil H. Green Distinguished Professor Emeritus, and his research group have generated more than 1,000 research articles and 200 patents, laying the groundwork for numerous successful medical products.

For example, the 3 million people in the United States who take melatonin as a sleeping aid are using a product that derives from research in Wurtman’s lab. “I’m very interested in using basic knowledge to ameliorate the human condition, to make living better,” says Wurtman, who is also a medical doctor.

Now a nutrient mix based on essential research contributions by Wurtman has shown promise in treating the early stages of Alzheimer’s disease, according to a new clinical trial funded by the European Union.

In the mid-2000s, Wurtman developed a nutrient cocktail aimed at treating what he considers “the root cause” of Alzheimer’s: loss of brain synapses. The mixture increases production of new synapses and restores connectivity between brain regions, improving memory and other cognitive functions. A French company then combined this research with a multinutrient it was developing along with the LipiDiDiet consortium — a European collaboration of 16 universities and research centers — to create a drink, called Souvenaid, for Alzheimer’s patients.

Over the years, Souvenaid has been the focus on several clinical trials to validate its efficacy. The mixture is not yet available in the United States, but it is being sold as a “medical food” — a category of regulated and safe foods that are designed for dietary management of diseases — in a number of countries across the globe.

In the new clinical trial, published in today’s issue of Lancet Neurology, patients with prodromal Alzheimer’s — the predementia stage of Alzheimer’s with mild symptoms — were given either Souvenaid or a placebo. Compared to people who drank the placebo, patients who drank Souvenaid throughout the trial showed less worsening in everyday cognitive and functional performance and significantly less atrophy of the hippocampus, which is caused early in Alzheimer’s by brain tissue loss.

“It feels like science-fiction, where you can take a drink of Souvenaid and you get more synapses … for improved cognitive function,” Wurtman says. “But it works.”

Other results of the study were mixed. The researchers say larger studies, involving more patients over a longer period of time, are still needed to determine if Souvenaid can actually slow progression of Alzheimer’s.

Souvenaid’s popularity may be on the rise today, but the product would not be possible without years of MIT research, Wurtman says.

In the mid-2000s, Wurtman’s research led him to seek the mechanisms behind the body’s production of phosphatides, a class of lipids that, along with proteins, form biological membranes. Production of these phosphatides, Wurtman discovered, depends on a set of nutrient precursors.

All those compounds taken simultaneously boost production of phosphatides, encouraging membrane development, which is critical in creating new synapses. Knowing that Alzheimer’s-affected brains continuously lose synapses, Wurtman patented the work through MIT’s Technology Licensing Office in hopes of using some version of the cocktail to treat Alzheimer’s and any disease that leads to loss of synapses.

Then, in 2003, Wurtman presented the work at a meeting in Europe. Attending the event was a representative from Nutricia — a unit of Danone, a French company known as Dannon in the United States — which was experienced in making medical foods. Wurtman was invited to the company’s headquarters, where a deal was hashed out to combine Wurtman’s findings with a multinutrient the company was working on to create a new treatment for Alzheimer’s.

By 2008, Danone had licensed the patent and Souvenaid was already a product. But Wurtman and several graduate students continued basic research behind Souvenaid, which gave the product a boost. “We were much more able to do the basic research at MIT,” Wurtman says. “As soon as we found something in the research, we’d patent it. We never had the lag time. If you work in entrepreneurship and innovation that lag time could be the downfall of a prospective product.”

Among the group’s key discoveries was the finding that Souvenaid boosted the number of structures called dendritic spines, found in brain cells. When spines from one neuron contact another, a synapse is formed.

A 2010 study detailing those findings in Alzheimer’s and Dementia indicated that Souvenaid improved verbal memory in patients with mild Alzheimer’s. A 2012 study published in the Journal of Alzheimer’s Disease confirmed and expanded these findings. Over six months, patients with mild Alzheimer’s were given Souvenaid or a placebo. Patients taking the placebo deteriorated in their verbal-memory performance in the final three months of the study, while the Souvenaid patients continued to improve. Both trials were conducted by Philip Scheltens of the Alzheimer Center of the VU University Medical Centre in Amsterdam.

In the new clinical trial by the LipiDiDiet consortium, researchers conducted a 24-month trial, where more than 300 patients with prodromal Alzheimer’s were randomly assigned Souvenaid or a placebo. The patients taking Souvenaid showed about 45 percent less cognitive decline than people taking the placebo, according to a measure known as the clinical dementia rating sum of boxes.

But the surprising finding, Wurtman says, is that the patients taking Souvenaid showed a substantial reduction is the loss of hippocampal volume. In early stages of Alzheimer’s, the hippocampus — which plays an important role in memory — shrinks as tissue is destroyed. But rates of deterioration for those taking Souvenaid were about 26 percent lower than the control group.

“That’s remarkable,” Wurtman says. “I never would have guessed that something like that could happen. But if you suppress the loss of the hippocampus, it makes sense that you’d have better retention of cognitive function.”

The results indicate that Souvenaid may be able to slow or stop full progression of very early Alzheimer’s into full-blown Alzheimer’s, Wurtman says.

With this new study, Wurtman has high hopes for Souvenaid. First, he says the findings could encourage more researchers to view synapse restoration as a treatment for Alzheimer’s, which isn’t a popular area of study. Most research today, he says, focuses on reducing the accumulation of amyloid plaques or minimizing damage caused by toxic metabolites in Alzheimer’s-affected brains.

“Everyone who writes about Alzheimer’s knows there’s a synapse deficiency, and this impairs connections between brain regions,” he says. “Even if the amyloid or another problem gets solved, one way or another, you’ll have to replace these synapses.”

Wurtman also hopes the study will “catalyze the rapid appearance of Souvenaid in the American market” and become a very early treatment for suspected Alzheimer’s patients. Several potential biomarkers are being studied as indicators of early Alzheimer’s. But it’s somewhat useless to detect these biomarkers if nothing can be done about the disease at that point, Wurtman says. With Souvenaid, he says, that can change.

“Most people don’t do a biomarker test, because … there’s been nowhere to go from there. Now, it will be possible, I believe, for a doctor to tell a patient that, even though they have early Alzheimer’s, they can take Souvenaid chronically to suppress the development of the disease.”