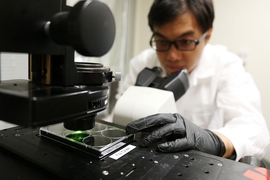 ↓ Download Image
Caption: A new technique for imaging biopsy samples relies on an approach known as expansion microscopy, in which the researchers expand a tissue sample to 100 times its original volume before imaging it. 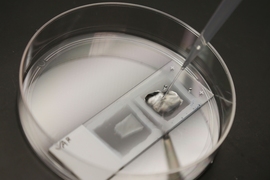 ↓ Download Image
Caption: This expansion allows researchers to see features with a conventional light microscope that ordinarily could be seen only with an expensive, high-resolution electron microscope. It also reveals additional molecular information that the electron microscope cannot provide.

Caption:
A new technique for imaging biopsy samples relies on an approach known as expansion microscopy, in which the researchers expand a tissue sample to 100 times its original volume before imaging it.

Caption:
This expansion allows researchers to see features with a conventional light microscope that ordinarily could be seen only with an expensive, high-resolution electron microscope. It also reveals additional molecular information that the electron microscope cannot provide.

MIT and Harvard Medical School researchers have devised a way to image biopsy samples with much higher resolution — an advance that could help doctors develop more accurate and inexpensive diagnostic tests.

For more than 100 years, conventional light microscopes have been vital tools for pathology. However, fine-scale details of cells cannot be seen with these scopes. The new technique relies on an approach known as expansion microscopy, developed originally in Edward Boyden’s lab at MIT, in which the researchers expand a tissue sample to 100 times its original volume before imaging it.

This expansion allows researchers to see features with a conventional light microscope that ordinarily could be seen only with an expensive, high-resolution electron microscope. It also reveals additional molecular information that the electron microscope cannot provide.

“It’s a technique that could have very broad application,” says Boyden, an associate professor of biological engineering and brain and cognitive sciences at MIT. He is also a member of MIT’s Media Lab and McGovern Institute for Brain Research, and an HHMI-Simons Faculty Scholar.

In a paper appearing in the 17 July issue of Nature Biotechnology, Boyden and his colleagues used this technique to distinguish early-stage breast lesions with high or low risk of progressing to cancer — a task that is challenging for human observers. This approach can also be applied to other diseases: In an analysis of kidney tissue, the researchers found that images of expanded samples revealed signs of kidney disease that can normally only be seen with an electron microscope.

“Using expansion microscopy, we are able to diagnose diseases that were previously impossible to diagnose with a conventional light microscope,” says Octavian Bucur, an instructor at Harvard Medical School, Beth Israel Deaconess Medical Center (BIDMC), and the Ludwig Center at Harvard, and one of the paper’s lead authors.

“A few chemicals and a light microscope”

Boyden’s original expansion microscopy technique is based on embedding tissue samples in a dense, evenly generated polymer that swells when water is added. Before the swelling occurs, the researchers anchor to the polymer gel the molecules that they want to image, and they digest other proteins that normally hold tissue together.

This tissue enlargement allows researchers to obtain images with a resolution of around 70 nanometers, which was previously possible only with very specialized and expensive microscopes.

In the new study, the researchers set out to adapt the expansion process for biopsy tissue samples, which are usually embedded in paraffin wax, flash frozen, or stained with a chemical that makes cellular structures more visible.

The MIT/Harvard team devised a process to convert these samples into a state suitable for expansion. For example, they remove the chemical stain or paraffin by exposing the tissues to a chemical solvent called xylene. Then, they heat up the sample in another chemical called citrate. After that, the tissues go through an expansion process similar to the original version of the technique, but with stronger digestion steps to compensate for the strong chemical fixation of the samples.

During this procedure, the researchers can also add fluorescent labels for molecules of interest, including proteins that mark particular types of cells, or DNA or RNA with a specific sequence.

“The work of Zhao et al. describes a very clever way of extending the resolution of light microscopy to resolve detail beyond that seen with conventional methods,” says David Rimm, a professor of pathology at the Yale University School of Medicine, who was not involved in the research.

The researchers tested this approach on tissue samples from patients with early-stage breast lesions. One way to predict whether these lesions will become malignant is to evaluate the appearance of the cells’ nuclei. Benign lesions with atypical nuclei have about a fivefold higher probability of progressing to cancer than those with typical nuclei.

However, studies have revealed significant discrepancies between the assessments of nuclear atypia performed by different pathologists, which can potentially lead to an inaccurate diagnosis and unnecessary surgery. An improved system for differentiating benign lesions with atypical and typical nuclei could potentially prevent 400,000 misdiagnoses and hundreds of millions of dollars every year in the United States, according to the researchers.

After expanding the tissue samples, the MIT/Harvard team analyzed them with a machine learning algorithm that can rate the nuclei based on dozens of features, including orientation, diameter, and how much they deviate from true circularity. This algorithm was able to distinguish between lesions that were likely to become invasive and those that were not, with an accuracy of 93 percent on expanded samples compared to only 71 percent on the pre-expanded tissue.

“These two types of lesions look highly similar to the naked eye, but one has much less risk of cancer,” Zhao says.

The researchers also analyzed kidney tissue samples from patients with nephrotic syndrome, which impairs the kidneys’ ability to filter blood. In these patients, tiny finger-like projections that filter the blood are lost or damaged. These structures are spaced about 200 nanometers apart and therefore can usually be seen only with an electron microscope or expensive super resolution microscopes.

“Now you can diagnose nephrotic kidney disease without needing an electron microscope, a very expensive machine,” Boyden says. “You can do it with a few chemicals and a light microscope.”

Using this approach, the researchers anticipate that scientists could develop more precise diagnostics for many other diseases. To do that, scientists and doctors will need to analyze many more patient samples, allowing them to discover patterns that would be impossible to see otherwise.

“If you can expand a tissue by one-hundredfold in volume, all other things being equal, you’re getting 100 times the information,” Boyden says.

For example, researchers could distinguish cancer cells based on how many copies of a particular gene they have. Extra copies of genes such as HER2, which the researchers imaged in one part of this study, indicate a subtype of breast cancer that is eligible for specific treatments.

Scientists could also look at the architecture of the genome, or at how cell shapes change as they become cancerous and interact with other cells of the body. Another possible application is identifying proteins that are expressed specifically on the surface of cancer cells, allowing researchers to design immunotherapies that mark those cells for destruction by the patient’s immune system.

Boyden and his colleagues run training courses several times a month at MIT, where visitors can come and watch expansion microscopy techniques, and they have made their protocols available on their website. They hope that many more people will begin using this approach to study a variety of diseases.

“Cancer biopsies are just the beginning,” Boyden says. “We have a new pipeline for taking clinical samples and expanding them, and we are finding that we can apply expansion to many different diseases. Expansion will enable computational pathology to take advantage of more information in a specimen than previously possible.”

Humayun Irshad, a research fellow at Harvard/BIDMC and an author of the study, agrees: “Expanded images result in more informative features, which in turn result in higher-performing classification models.”

Scientific American reporter Lindsay Brownell writes that MIT researchers have developed a technique to enlarge pathology samples. “Not only are expanded samples easier to see because they are larger and more transparent, fluorescent tags and other labels can also be added to track individual molecules of interest.”