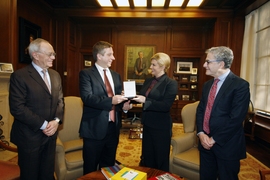 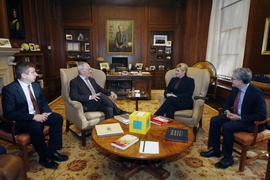 The state visit began in the office of MIT President L. Rafael Reif, who greeted Grabar-Kitarović and engaged with her in a discussion, partly about the need to have more women pursue careers in science, engineering, and mathematics. Reif also exchanged formal gifts with Grabar-Kitarović.

While in the MIT president’s office, Grabar-Kitarović presented Soljačić with two medals. One, for his special contributions to science, is the Order of the Croatian Morning Star, bearing the image of Ruder Bošković (a noted 18th-century physicist and astronomer from Dubrovnik). The other medal, the Order of the Croatian Interlace, is for contributions to Croatia’s development, reputation, and the welfare of its citizens.

Soljačić is a physicist and native of Zagreb, Croatia, whose work in photonics has produced a variety of new applications in fields ranging from solar energy to novel types of lasers.

Grabar-Kitarović, who was elected president of Croatia in 2015, called the visit to MIT “very inspiring” when she met later with a panel of Croatian students — mostly graduate students and postdocs — who are enrolled at MIT. Soljačić and Michael Sipser, the dean of the School of Science at MIT, were also part of the discussion forum.

Sipser presented an overview of basic research in science at MIT, from astronomy and physics to neuroscience and biology, and noted some of the recent fundamental advances in which MIT has played a role — such as the observation of gravitational waves, for which MIT physicist Rainer Weiss recently received the Nobel Prize.

“In many cases I’ve found that what attracts people to come into science are these fundamental discoveries,” Sipser said.

Soljačić, who runs the Photonics and Modern Electro-Magnetics Group at MIT, presented the forum with an overview of his research group’s advances — which apply to a wide range of topics and technologies, including more efficient solar cells, wireless power transfer, optical neural networks, and privacy for touch screens.

During the forum, Soljačić said he was “very honored” to have received the awards from Grabar-Kitarović and the government of Croatia; for her part, Grabar-Kitarović said it was “an honor for me too” to have presented them.

Grabar-Kitarović solicited input from the students at the panel about ways of encouraging Croatian students to stay in the country — or return to it, after a spell of study elsewhere — and to help add to the country’s intellectual ecosystem. She also noted that her country needed to address the “lack of opportunity” that some talented students can face when it comes to gaining a foothold in academic research.

“I hope with the help of the wonderful young people around the table, we will be able to help by bringing more science and technology [research] to Croatia,” Grabar-Kitarović said.

Grabar-Kitarović is the first female president in Croatia’s history. (The country declared independence from the former Yugoslavia in 1991.) Before becoming president, she served in a variety of governmental positions, including a term as Croatia’s ambassador to the U.S., from 2008 to 2011.