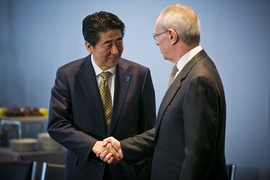 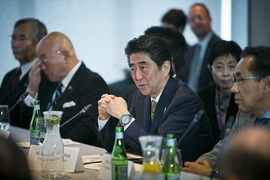 ↓ Download Image
Caption: Abe addresses the crowd during a roundtable discussion on innovation 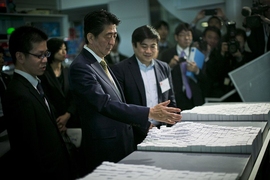 Prime Minister Shinzo Abe of Japan visited MIT Monday morning as part of his weeklong trip to the U.S., participating in a roundtable discussion of innovation strategies during his stop at the Institute.

Abe called MIT a “center of innovation in the world” and said he was “very impressed and grateful” for the remarks on innovation at the meeting with MIT faculty in fields ranging from bioscience to management and political science.

Abe added that encouraging a “virtuous circle” of innovation, including academia, was “one of the pillars of my growth strategy,” and emphasized his commitment to seeing women have an equal role in innovation and entrepreneurship. Japan will “double our efforts so that female leaders have a better chance,” Abe said, asserting that he wants to “create a society where women can shine.”

“Japan is a country MIT has studied and admired for many years,” Reif said, noting that 39 current courses at the Institute focus on Japan. Moreover, Reif observed, over 1,000 undergraduates have worked and studied in Japan as part of the MIT International Science and Technology Initiatives (MISTI) program, which places students in internships; today, more than 1,600 MIT alumni also live in Japan.

In conjunction with Abe’s visit, the government of Japan announced a new gift to MIT.

The gift takes the form of a fund that will initially support research in Japanese politics and diplomacy at MIT’s Center for International Studies (CIS) and, in its second phase, the creation of a new chaired professorship, to be titled the Professor of Modern and Contemporary Japanese Politics and Diplomacy, within MIT’s Department of Political Science.

As the title of the chair suggests, the new position will focus on current-day issues in Japanese politics and international relations, building on MIT’s existing strengths in those areas. The gift will take effect ahead of the start of the 2015-16 academic year.

Innovation from many perspectives

Abe began his visit by talking with researchers in the Media Lab, guided by Media Lab Director Joi Ito. Abe listened to research presentations by Neri Oxman, the Sony Corporation Career Development Associate Professor of Media Arts and Sciences and director of the Mediated Matter group, along with Chikara Inamura and John Klein, graduate students in the group; Hugh Herr, associate professor of media arts and sciences and head of the Biomechatronics group; and graduate student Philipp Schoessler, who works with Hiroshi Ishii, the Jerome B. Wiesner Professor and director of the Tangible Media group.

During the roundtable discussion on innovation, held on the sixth floor of the Media Lab, faculty members took turns making presentations before Abe responded to the group.

Political scientist Richard Samuels, the Ford International Professor and director of CIS, noted that MIT and Japan have historical ties dating to the 1870s, soon after Japan opened to the West; he added that Japan’s “spirit of innovation and improvement has never flagged.” Still, Samuels suggested, while Japan was viewed in the 1980s as the “model for how to do technology right,” today’s innovation landscape is more open-ended and depends on access to capital, a university-based research and spinoff culture, and more.

Other faculty discussed what they regard as especially crucial elements of an innovation ecosystem. Neuroscientist Susumu Tonegawa, the Picower Professor at MIT, recommended alterations in the rules of Japanese universities to allow professors more time pursuing off-campus research. He added that it is “important for the Japanese government to continue to support fundamental research.”

Robert Langer, the David H. Koch Institute Professor at MIT, also emphasized the significance of academic research in innovation. He cited Cambridge’s biotechnology sector as an example, saying growth “will follow [if we] fund universities to do the best research, and train the best students in the world.”

Some of the MIT faculty present study innovation, and offered remarks on that topic. Suzanne Berger, the Raphael Dorman and Helen Starbuck Professor of International Relations at MIT, recommended that Japan pursue growth opportunities in advanced manufacturing and connected fields. “There is such a tight connection between innovation and production,” Berger said.

Fiona Murray, the Bill Porter Professor of Entrepreneurship, associate dean for innovation in the MIT Sloan School of Management, and co-director of the MIT Innovation Initiative, added to Abe’s remarks about gender and entrepreneurship, noting that “male and female graduates are equally interested in taking this path.” She also observed that sound policies spark innovation, saying there are “important ways that governments have brought stakeholders together to effect change.”

Kenneth Oye, an MIT political scientist with expertise in both Japan and in technological regulation, suggested that forward-looking attempts to gauge the risks of new technologies, particularly in biomedical research, were in the “common interest” of the U.S. and Japan. In turn, he said, “realizing the consequences” of evolving technologies would make it easier for widely useful new tools to get adopted.

For his part, Ito suggested that new tools and techniques have made sophisticated, interdisciplinary innovation more plausible at smaller scales, and suggested that it is important for funders to give researchers room to make discoveries — since many of them are tangential to the original aims of a research project.

“Japan really can build the same kind of economy we see here in Massachusetts,” Ito suggested.

In response to these comments from the discussants, Abe said the interdisciplinary nature of the projects on display in the Media Lab created “quite an insightful moment” for him.

“We would like to see further fruition of a similar model,” Abe added, referring to Japanese efforts to build an innovation ecosystem in the city of Okinawa, drawing upon contributions from academia, industry, and government.

Abe also praised Samuels, noting that the political scientist’s scholarship had been “very effective” in “deepening relations between Japan and United States.”

Abe’s trip to the U.S. coincides with the 70th anniversary of the end of World War II, in which Japan and the U.S. were adversaries. Abe will meet at the White House with President Barack Obama, and on Wednesday will deliver the first address by a Japanese leader to a joint session of Congress.

The Japanese prime minister will also discuss global economic and diplomatic issues while in Washington, including the Trans-Pacific Partnership, a potential trade agreement that has drawn some domestic opposition in both the U.S. and Japan. Abe will make stops in Los Angeles and San Francisco later in the week before returning to Japan.