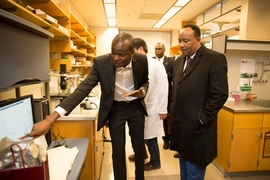 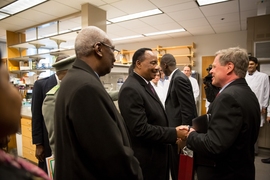 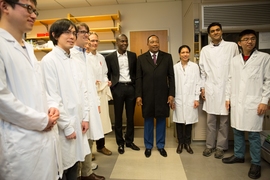 President Mahamadou Issoufou of Niger visited MIT today, touring a biophysics laboratory that he cited as a “model” for students in his own country.

Issoufou visited the lab of Ibrahim Cissé, an assistant professor of physics, who is a native of Niger. Cissé and Issoufou, who is a trained engineer, engaged in an extended discussion of Cissé’s research; Issoufou complimented Cissé on doing a “remarkable job” with his work.

Cissé studies the physics of molecular mechanisms in living cells, with the aim of better understanding cell organization and the mechanics of transcription in genetic material, among other phenomena. Illuminating the physical dynamics of such processes could have clinical applications.

Speaking in French, Issoufou quipped that students in Niger could strive to follow the “Cissé model” of scientific accomplishment.

Issoufou, who won Niger’s presidential election in 2011, also queried Cissé on the interdisciplinary nature of his lab. Cissé is a trained physicist, but the postdocs and PhD students in his group include biologists, chemists, and mathematicians.

During the conversation, Issoufou and Cissé also noted the distinctly international flavor of the research group, whose eight researchers hail from six different countries: Germany, India, Japan, Malaysia, South Korea, and the U.S.

Cissé and his researchers presented Issoufou with a T-shirt using elements of the periodic table to spell “Pr. Issoufou.” Not missing a beat, Issoufou promptly identified all the elements used to spell his name.

Bernd Widdig, MIT’s director of international affairs, presented Issoufou with a gift on behalf of the Institute; conversing with his hosts, Issoufou thanked them for the warm welcome and noted that he had visited MIT once before, in 1981.

“It’s an honor for us to have the president visit us,” Cissé told MIT News before the event.

Peter Fisher, a professor and head of MIT’s Department of Physics, added: “Biophysics is a key area in our strategic plan. … We’re excited that [Issoufou] is coming, but we’re also excited that Ibrahim is here. We’re going to continue to build the group, and he’s going to be a big part of it.”

Widdig added that MIT’s international affairs staff was “especially impressed that [Issoufou] has such great interest in having a close look at our research, and in Ibrahim’s lab. I hope this visit will enable us to more strongly collaborate with the region, and with Niger in particular.”