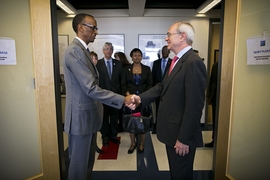 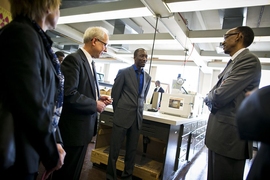 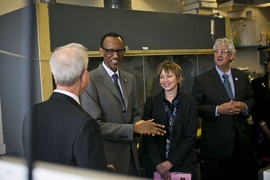 Yesterday, Paul Kagame, the president of Rwanda, visited MIT to discuss existing collaboration between his country and MIT, as well as to explore the possibility of broadening its scope. Kagame was traveling with Rwandan Ambassador to the United States Mathilde Mukantabana, Rwanda’s Permanent Secretary of the Ministry of Education Sharon Haba, and others of Rwanda’s leadership.

President Kagame and his delegation, together with Maria Zuber, MIT’s vice president for research and the E. A. Griswold Professor of Geophysics, and Philip Khoury, associate provost and the Ford International Professor of History, toured the laboratory of Professor Ronald Prinn, who leads the Rwanda-MIT Climate Change Observatory Project and is the TEPCO Professor of Atmospheric Science in the Department of Earth, Atmospheric, and Planetary Sciences.

Rwanda and MIT are collaborating to build a world-class observatory on Mt. Karisimbi measuring climate change and the atmospheric gases forcing climate change; the observatory is ultimately to be run by local researchers. The project evolved from discussions in 2008-2009 between President Kagame, his ministers, and the MIT administration.

Mt. Karisimbi will join the MIT-led multinational Advanced Global Atmospheric Gases Experiment (AGAGE) network that has been measuring atmospheric composition continuously over the globe since 1978. This unique new site can measure air coming from Rwanda and many other nations within and beyond Africa. Access to the 4,500-meter-high summit of Karisimbi will be facilitated by a new cable car being built for eco-tourism.

While the cable car is being built, an interim observatory has been set up on Mt. Mugogo to train the local technicians. Besides Prinn, Kat Potter, the station scientist, and doctoral student Jimmy Gasore are installing the first phase of instruments that measure temperature, winds, humidity, carbon dioxide, methane, carbon monoxide, ozone, and nitrous oxide. The second phase involves an automated mass spectrometer measuring over 50 other greenhouse gases and air pollutants.

Rwandan researchers will gain the capability using computer codes to calculate regional greenhouse gas sources and sinks, climate change, and air pollution. The observatory data will be used for University of Rwanda student thesis projects, and Prinn is working with Rwandan faculty on a new Atmospheric and Climate Science master’s degree and undergraduate courses.

Rwanda will gain local capacity to adapt to climate change using the capability to forecast regional and local climate change to address the needs of local decision-makers; take advantage of revenue-yielding opportunities to mitigate climate change (such as reforestation and renewable energy using greenhouse gas sources and sink estimates); and grow a scientifically and technically educated work force that can address other important local and regional environmental and economic development issues.

Following the lab tour, Kagame and his delegation were received by MIT President L. Rafael Reif and Professor Zuber. Reif and Zuber were joined by leadership from parts of MIT that have active engagement or interest in Rwanda: the Jameel Poverty Action Lab (J-PAL); MIT D-Lab; and the MIT Energy Initiative (MITEI); and EAPS.

In beginning the round-table discussion, Reif told Kagame and the rest of the meeting participants that an exploration of possibilities for new or enhanced collaboration would best center on three areas that bear directly on the well-being of Rwandans: the environment; online learning; and innovation and entrepreneurship.

MIT participants updated Kagame on current and possible engagements. Tavneet Suri, the Maurice F. Strong Career Development Professor and an associate professor of applied economics at the MIT Sloan School of Management, is the scientific director for Africa for J-PAL. She reminded Kagame of meetings held last year between J-PAL and Rwandan governmental ministers, and she described progress made on engagements currently under way; they include an effort to prevent HIV among adolescent girls, as well as work on a water-tank project. J-PAL is also helping Rwanda to build capacity for its senior civil servants and adaemics.

Robert Armstrong, the director of MITEI and the Chevron Professor of Chemical Engineering, provided an overview of MITEI’s work; he emphasized possibilities around solar research and work being done at MIT to explore how to provide energy for villages through the establishment of “microgrids.”

Kofi Taha, asssociate director of D-Lab, described the work of D-Lab and its focus on collaborating intensely with people to develop, side-by-side, the tools they need in order to improve lives. He expressed the hope that D-Lab might be helpful to the Rwandan government’s “Vision 2020,” an effort to transform Rwanda into a middle-income, knowledge-based economy by the year 2020.

Esther Duflo, the Abdul Latif Jameel Professor of Poverty Alleviation and Development Economics in the Department of Economics and founder and director of J-Pal, discussed the potential of online learning tools for teaching development economics and other subjects to those working to effect change. President Reif pointed out that though there are only a handful of Rwandan students at MIT, 1,700 Rwandans are taking courses through edX, the online learning platform founded by MIT and Harvard University.

President Kagame spoke of his desire to connect the discrete projects currently under way between MIT and Rwanda and to identify a clear set of further areas for collaboration, with Haba leading future discussions on behalf of his administration, and with the close involvement of the University of Rwanda.

At the close of the meeting, Reif and Kagame agreed that the discussion showed good potential for greater collaboration.