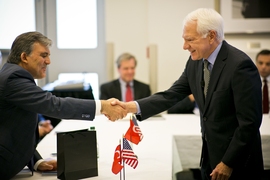 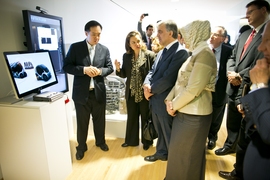 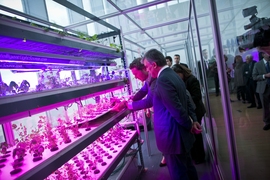 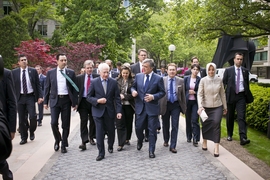 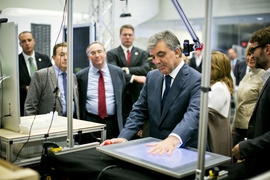 The president of Turkey, Abdullah Gul, toured MIT on Friday, looking at research projects and meeting with administrators, faculty, and students alike in his first visit to the Institute.

Gul’s visit began with a presentation by MIT Vice President Claude Canizares, the Bruno Rossi Professor of Physics, who oversees the Institute’s international affairs. Speaking in MIT’s Building 10, Canizares gave Gul an overview about MIT’s aims and activities, and presented Gul with a gift on behalf of MIT president L. Rafael Reif.

As part of MIT’s global orientation, Canizares noted, the Institute has a substantial population of Turkish scholars on campus, from undergraduates to graduate students and professors. The Institute also has an ongoing academic relationship with Sabanci University in Istanbul, Turkey.

The MIT hosts and the visiting Turkish delegation also took a tour of MIT's Media Lab, where they received several presentations by members of the lab’s research groups.

Mitchel Resnick, the LEGO Papert Professor of Learning Research at MIT and director of the Lifelong Kindergarten group at the Media Lab, gave a demonstration of educational tools intended to help children learn playfully, and quipped that the Media Lab as a whole was also “like a big kindergarten” in its emphasis on playful learning.

Gul was engaged with the MIT presenters, asking follow-up questions. When shown a half-size model of an electric vehicle developed at MIT for urban mobility, for instance, he made queries about the development time needed for the project, as well as the vehicle’s potential compatibility with other automobiles.

Gul has been president of Turkey since 2007. Previously, Gul served as prime minister, in 2002, and as foreign minister. Gul currently serves in concert with the Prime Minister of Turkey, Recep Tayyip Erdogan.

“We’re glad we could show the president the ‘mens et manus’ spirit of MIT,” said Bernd Widdig, MIT’s director of international affairs, referring to the Institute’s motto of “mind and hand.”

Widdig, who helped host the visit, also noted that the event demonstrated to President Gul the active, ongoing relationship between Turkey and MIT.

“He was impressed by the strong presence of Turkish members of our community, including students, postdocs, and the 10 faculty members we have who were born in Turkey,” added Widdig.

Alumni bring Turks and Armenians together for joint initiative